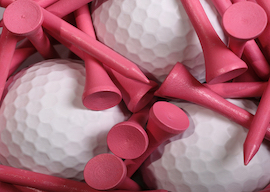 Why has the American national women’s soccer team won its version of the World Cup four times, while our national men’s team hasn’t made it past the quarterfinals since 1930?

It’s not that the American women are better in an absolute sense than the American men. In 2017, for example, the U.S. women’s team was beaten 5–2 by a team of Dallas boys no older than age 15. But Americans aren’t sophisticated enough soccer fans to notice how much worse the quality of play is in women’s soccer than in men’s soccer.

Success in women’s golf is largely a Social Construct of how much fathers want their daughters to win at golf. Right now, Korean dads obsess over that much more than do American or Australian dads.

Women’s golf has been hugely fashionable among Koreans for the past 20 years, so at present 12 of the top 20 ranked women in the world are South Koreans or from the Korean diaspora. Korea now has so many professional women golfers and so few surnames to go around that the No. 7 ranked player in the world is officially known as Jeongeun Lee6, because she is the sixth Korean lady golf pro named Jeongeun Lee.

In contrast, the highest-ranked Korean man is American Kevin Na at No. 32.

Why the difference? Because success in women’s sports is extremely socially constructed. After the part-Asian Tiger Woods’ triumph in 1997 and Se Ri Pak’s victory in the 1999 U.S. Women’s Open, Korean tiger parents fell in love with the idea of molding their children into golf prodigies.

But that’s easier to do in the women’s game because golf isn’t all that fashionable at present outside of East Asia. Women golfers were thought chic and sexy in F. Scott Fitzgerald’s America. But fashions change and now they aren’t. So not many American girls practice golf fanatically.

On the other hand, wherever golf is played, some boys are going to obsess over the game. For example, in 2004, Tiger Woods was briefly dethroned as world No. 1 by Vijay Singh from Fiji, a country that had only one golf course when Singh was growing up.

On the other hand, teenage girls don’t necessarily get better at sports as they age and the estrogen flows.

Back in 2004 the best 14-year-old golfer on the planet might well have been a girl, the Korean-American Michelle Wie, who entered the PGA Tour’s Sony Open and shot 72–68, missing the cut by only one stroke, which was better than 47 male professionals. To put this in perspective, Tiger Woods, the greatest golf prodigy of all, never made the cut in a pro tournament until age 18. If Wie had made one more putt, she would have been the youngest human ever to make the cut in a PGA tournament.

On the other hand, although she has since won five times on the Ladies PGA Tour, Wie hasn’t really lived up to her adolescent potential. She has been plagued by injuries that may be related to too much practicing when young, and by suspicions that she doesn’t really like golf that much anymore. She recently announced her engagement to NBA executive Jonnie West, the son of the legend Jerry West, and that she is taking the rest of the year off from the LPGA grind to recuperate.

Women’s soccer in America is a bit like women’s golf in South Korea, although its rise was less organic and more bureaucratic. The 1972 Title IX legislation mandated equal treatment of male and female college athletes, even though guys are clearly more sports-crazed. It’s hard to come up with sports that coeds care much about, so soccer has prospered by default as perhaps their least unfavorite team sport.

Thus, 333 NCAA Division I colleges host women’s soccer teams compared with only 204 men’s teams. And the women get 14 scholarships to only 9.9 for the men, for a total of 9,383 Division I scholarships for women versus merely 5,926 for men.

There are still more boys playing high school soccer than girls, but bribing girls with college scholarships has narrowed the gap.

The American system of training soccer players, boys and girls, via playing numerous 11-on-11 games in the hope of winning a college scholarship and then turning pro at age 22 isn’t terribly effective at creating male world-class soccer stars.

Instead, the proven methods for thriving in the men’s World Cup are the Brazilian—let slum youths kick a soccer ball all day as they play hooky—and the Dutch—enroll the best 7- and 8-year-old boys in an intensive academy owned by a major-league team.

The most famous soccer academy is likely Ajax in Amsterdam, where Johan Cruyff, possibly the most influential player ever, was trained. The modern style of “Total Football” was largely perfected by Ajax about 50 years ago.

Handpicked boys go to school in the morning and train at Ajax in the afternoon for free (unlike the pay-for-play model that keeps soccer highly middle-class in the U.S.). If the Dutch lads become professional-quality, Ajax can sell their contracts for tens of millions.

The Dutch apprentices seldom play 11-on-11 games because games don’t provide them with enough touches of the ball. Instead, to maximize touches, they drill one-on-one constantly under scientific coaching.

The Dutch system chews up and spits out countless boys who aren’t quite good enough, but it does produce great players. The Dutch have made three World Cup finals, despite a population of only 17 million.

American soccer kids, in contrast, play huge numbers of 11-on-11 games, which are fun and healthy (but can wear out joints, especially on girls). But the genteel American style of training leaves their skills rudimentary compared with the drilled Europeans. Moreover, our main goal is a college scholarship, which Europeans find bizarre: A true talent would be playing professionally as a late teen.

Unsurprisingly, the U.S. men’s World Cup performance has been not bad, but not great, either. Although America failed to make the last World Cup (but neither did the Netherlands or mighty Italy), in general the U.S. has stayed neck and neck with Mexico, a fellow large-population underachiever.

In contrast, Croatia (population 4 million) has finished second and third in World Cups in its less than 30 years of independence. (By the way, my vague impression is that we have quietly entered a golden age of Balkan athletes.)

Sure, America has more popular indigenous sports that absorb much of our huge population’s talent. But most of our homegrown sports are biased toward the tall, while soccer could be a good fit for the half of the population that is below average in height.

On the other hand, the American system of soccer, with its team spirit and college orientation, is probably better preparation for life for the majority of players who won’t become pros.

Yet the much-criticized American system works fine for training World Cup-winning women, simply because the rest of the world hasn’t cared much about women’s soccer.

For instance, the third-best record in the history of the women’s World Cup, after the U.S. and Germany, belongs to tiny Norway (population 5 million) due to the traditional lack of effort made by men’s soccer superpowers like Italy and Argentina, neither of which have ever made it to the women’s final four.

Or consider the midsize Netherlands, a highly feminist culture and often considered the intellectual leader of soccer. Yet the Dutch women’s team didn’t even qualify for the World Cup until 2015. This year it made it to the finals, where it lost to the U.S.

The Europeans, with their superior methods, will likely take over the women’s World Cup in the future, but the U.S. still had enough of a head start to win in 2015 and 2019.

Ajax started a women’s team in 2012, but it still does not appear to admit girls to its training academy. A relentlessly profit-seeking business, it only invites in youths from whom it might eventually earn a windfall by selling them to Barcelona or Manchester United. So far, the money in women’s soccer is too small to bother with.

This is not to say that money can’t be made off female sports. With women’s games, nationalism sells.

But the typical American brainstorm of trying to follow up a national women’s team’s success in the World Cup or Olympics—whether in soccer, basketball, ice hockey, or softball—by starting a women’s pro league does not have a strong financial track record.

The NBA, for instance, has wasted a lot of money on the WNBA since the late 1990s. A particularly costly mistake has been letting lesbians take over the culture of the WNBA, a fate that the much more lucrative sport of women’s tennis has largely avoided.

This year, the media appeared newly intent on lesbianizing the image of women’s soccer as some sort of triple-bank-shot ploy in its War on Trump. This would not be good for women’s soccer’s popularity.

Professional men’s leagues are based on teams representing cities rather than, say, Coke or Nike because it’s natural for human beings to cheer on their community’s strong young men as they Defend The Home Turf from raiders. This is such a primal instinct that it can keep up male interest through an inordinate number of contests each year, such as Major League Baseball’s 162 regular-season games.

But few humans conceive of women as their saviors in territorial struggles. While men’s sports are obviously stand-ins for war, women’s international sports instead are less like battles and more like beauty contests or talent competitions to show off to the world these exemplars of the American Way of Life. Granted, French girls may dress better, Italian girls cook better, and Russian girls dance better, but all those billions of miles chauffeured by American soccer moms have made our girls world champs.

Moreover, the long interims between World Cups and Olympics appeal to women spectators, who find it hard to stay interested in endless regular-season contests, but appreciate the human drama of these major turning points in life.

It’s easy to mock the capsule narratives the networks come up with to hook women viewers—“After her heartbreaking loss four years ago, she put her dream of starting a family on hold for four years to rededicate herself to America winning today. But, just last week, her beloved grandmother died and…” Yet that kind of narrative is, objectively, far more compelling than the monotony of a professional league season.

So rather than ape the NFL and NBA leagues, women’s sports would be better advised to adopt the barnstorming model of tennis and golf in which all the stars come to your city at once, but only a single time per year.

Rather than divvy the national team’s stars out among different cities, keep the U.S. team together and have it tour the country playing every Sunday against a squad of foreign all-stars with some sinister un-American name, such as Team Putin.