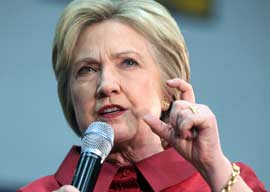 But as with Ivana Trump walking back her comments, Broaddrick undermined her own rape narrative by signing an affidavit in the late 1990s denying Clinton had ever raped her. But almost immediately after signing that document, she told prosecutor Kenneth Starr that she’d lied on it and that Clinton had indeed penetrated her against her will. She has stuck with that story ever since.

Geez Louise! Sigh. Ladies, if you’re going to make a rape accusation, I suggest you stick with it until either the accuser is behind bars or you’re locked up for filing a false police report. This constant flip-flopping, this sick petal-plucking game of “he raped me/he raped me not” severely undermines and ultimately discredits the whole doggone business of making rape allegations.

And then there’s Hillary Clinton, who has stood by her man Tammy Wynette-style for decades, even if she hasn’t slept with him in years. Sure, she may have slapped him, clawed his face open, and thrown blunt objects at him, but she stood by him. She openly slandered his accusers as “wacky” in the service of a greater cause”namely, psychotically seizing levels of incomparable power by caring to give a shit about any other woman besides herself.

If she’s going to posture as a feminist, she risks being eaten alive by other feminists who ain’t too keen on the idea of a female ally enabling a serial philanderer, groper, and possible rapist.

Much is made of Trump’s high polling negatives among women. But although polls conflict, some show Clinton with even higher negatives among men than Trump has among women. More than possibly any other single factor, this election may hinge on how much an opposing candidate reminds voters of unpleasant experiences with the opposite sex.

If there’s a person in this campaign who appears to seethe with resentment for the opposite sex, who has a score to settle in a conclusive and very public manner, it’s the scorned woman who occupied the White House from 1993-2000.

My guts tell me that a Hillary Clinton presidency would be far more hostile toward male interests than Donald Trump’s would be toward women. If you think Obama was bad with the “white” thing, wait ‘til you see what Hillary Clinton does with the whole “male” thing. That’s why this November, I encourage all men to vote with their dicks.