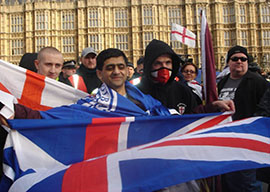 The English Defence League (EDL) is a white-power sect of the British National Party that hates Jews, gays, and blacks but REALLY hates Muslims. In short, they”re Nazis.

It’s easy to find images of their supporters Sieg Heiling and standing next to Nazi flags. Yet they claim they aren”t Nazis. As Jim Carrey once said about the vaccine industry, “How stupid do they think we are?”

Top-brass EDL member Kevin Carroll is a particularly vile human being who happily supported the BNP several years ago and thinks all blacks need to go back to Africa where they…hang on…I just found out that he signed a BNP petition before he knew anything about their politics and thought they were only a patriotic organization. He says he had asked them if they were racist, and they assured him they weren”t. Shit, it gets worse. Turns out his wife and daughter are black. Apparently Kevin hates the BNP and makes sure the EDL has nothing to do with them whatsoever.

All right, all right, but there’s no doubt the EDL’s actual leader is a racist, especially when it comes to East Indians. A News of the World reporter recorded him saying, “Fuck the Pakis,” and he also said all Muslims are going to hell. This xenophobic skinhead scumbag calls himself…wait, “Guramit Singh”? He is a Paki? Hmmm. When he said the “Pakis” quote, he was specifically referring to Pakistanis, not the large Asian swath the term usually includes. It’s still rude. And when the BBC confronted him with the “hell” quote, he said he screwed up a speech that had been posted the day before on the EDL’s site. The speech said that militant Muslims are going to hell. Hmmm, I heard militant Muslims believe infidels need to convert or die. That sounds proactively crueler than the Singh quote. This is getting confusing. I”m not even sure I get what the word “racist” means anymore. How can you be racist about a religion that includes almost every race there is?

The EDL are still Nazis, though. A group called UAF (Unite Against Fascism) uses communism and socialism to lecture working-class people about how wrong they are to worry over their jobs. Alongside LMHR (Love Music Hate Racism), UAF shows up to all EDL marches waving their hammers and sickles in a show of force against all the, uh, all the Nazi flags they expected to see the EDL waving. Like all Marxists, they know religion is the opiate of the masses and it needs to be preserved all costs. Viva the UAF and down with the EDL Nazi scum!

Oh my Lord, you”re not going to believe this. The EDL made a video where they burned a Nazi flag to show people once and for all how they truly feel about the swastika. I learned this from their Jewish division, a group that regularly fights Islamic anti-Semitism in Britain. I”m getting a headache.

“Guilt by association can get pretty flimsy. Hitler used toilet paper. Does that mean I have to start wiping my ass with my left hand?”

So what is the EDL all about? Apparently the organization was formed in Luton after Muslim extremists protested a welcome-home parade for British troops. These Muslims with British accents were carrying signs that said, “Anglican Soldiers Go to Hell” and “Butchers of Basra.” The native Lutonians went ballistic. A pro-Britain, anti-extremist-Islam group was born. Within a few weeks, the EDL had thousands of members across the country. They seem to be made up of blue-collar Brits who are mostly white, with a light peppering of blacks and even a Muslim member who goes by the name of EDL Abdul.

Wait, what am I saying? This group is evil.

They”re almost definitely homophobes. These big, tough, repressed, soccer-hooligan types would love to kick some poof in the teeth on their way to a Muslim-bashing. I just know it. Crap. They have a “Lesbian, Gay, Bi, and Transgendered” division. Apparently UK gays feel a lot more affiliation with poor patriots than with the Muslim immigrants who see their lifestyle as a capital crime.