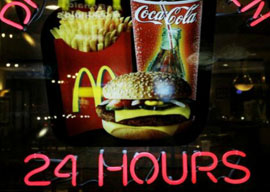 American has a “youth” problem or, as sometimes put, a problem with “youfs” or “teens” or even “thugs.” Most people correctly understand this as underclass black teenagers (of both sexes) waging a violent war on whites. In some instances the targets are individuals”the knockout game and polar bear hunting“while other victims are innocent whites caught in black-on-black chaotic “flash mob” brawls at shopping malls, movie theaters, and just about anywhere else young blacks congregate.

Statistically speaking, it’s hardly a big deal compared to “traditional” crimes. In 2012, for example, the FBI reported a little over a million assaults and I”d guess that whites victimized by these teens were a tiny fraction of that figure.

Leaving aside the possibility of an impending race war, this violence is consequential for its destructive impact on public space, which in turn undermines civilized life. Further add killing off brick-and-mortar businesses and all the associated jobs. Why visit the mall if you are unlucky enough to arrive the day when the newest Air Jordans go on sale? Better to stay home, order online, and avoid human contact altogether. Youf attacks resemble neutron bombs”the people vanish, but the now empty buildings remain untouched.

It is their randomness that makes these attacks so terrifying. Normal prudence is no defense. A purse-snatcher will ignore a little old lady who wisely left her handbag home; not so for a knockout artist”a victim can be anybody who is handy, provided that they are white. Even surveillance cameras cannot deter”perpetrators love the publicity and happily post their exploits on YouTube. (For a peek into this world, see here.)

So what is to be done? Draconian punishment to “send a message” is futile. Harsh justice only mobilizes grievance mongers complaining about sentencing disparities. I can already see the apprehended culprit’s tearful mother on TV defending her son as “a good boy” who was on the verge of turning his life around. Similarly forget about aggressive policing since the inevitable “incident””i.e., forcefully arresting a looter”will only inflame fellow rioters. And since such violence is now enabled by social-media coordination, who knows where the next incident will occur? Most of all, few can rule out finding these feral youngsters well-paying jobs, ending invisible racism, and similar expensive doomed-to-fail “root cause” nostrums. An armed citizenry would suffice, but this seems applicable only in places such as Montana, where few knockout artists reside.

We need to make certain public spaces youf-unfriendly”an environment that makes predators so uncomfortable that they cannot even imagine going there. A place where little old ladies can safely go to and fro talking on their latest iPhones.

It’s not nearly as difficult as it might initially seem. Millions of businesses successfully do it daily, though they dare not admit it publicly. Nobody wants to be accused of racial discrimination or sued for a racially “hostile environment.”

Consider one of those rare publicly admitted successful “Teen-Be-Gone” campaigns. An Australian McDonald’s open 24/7 attracted groups of late-night young loiterers, hardly a situation conducive to business. The manager solved the problem by loudly playing classical music, including opera. Sure enough, most of the youngsters fled elsewhere. Other Australian McDonald’s restaurants favored Barry Manilow.

I have long known of the power of music to empty a room. My first college roommate filled our small dorm room with his talkative friends. When I played Arnold Schoenberg’s profoundly irritating screechy 36-minute “Pierrot Lunaire,” the exodus was instant.

On the other hand, if you want to attract a middle-class female clientele to a restaurant, pipe in softly audible Vivaldi, Telemann, or Corelli. Middle-class women love this ambience, but teens can”t stand it. Similarly, I had a friend in Illinois who owned the local jukebox business and told me that when scruffy blacks entered his redneck-friendly bars, the bartender immediately put a quarter into the jukebox to play hardcore country-and-western music of the “Stand by Your Man“ ilk. In some instances the prescription might be “white” folk music such as The Kingston Trio or Judy Collins.