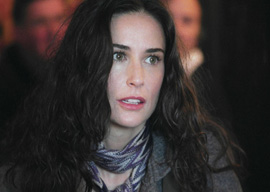 Hollywood made a silent film in the 21st century. Big whoop. Now they’re acting like they pioneered something “groundbreaking.” Originality is clearly not Hollywood’s forte. Perhaps their sanity is also in question. When the industry touts a film such as The Artist merely because the movie features a cute dog and a handsome unknown French actor, I wonder who exactly should go to rehab. Now the French acteur is going to win lots of awards, and the boorish Weinstein Brothers will plow ahead with their grand careers despite the fact that Harvey “The Punisher” Weinstein is rumored to be fond of hurling unbelievable insults as well as office paraphernalia at his underlings. I guess people take his movie choices seriously because he has produced so many great movies in the past. Either that or they’re scared to say he’s a big fat demon who will get an Oscar for convincing us his crappy silent film actually deserves one.

“Originality is clearly not Hollywood’s forte.”

In more clichéd news from Los AN-hell-eez, it has been reported that Demi Moore collapsed and entered rehab because of her addictions to…get ready for it…the list is a doozy…here it comes…wait for it…wait for it…Red Bull, nitrous oxide, Adderall, and synthetic marijuana. All this with huge doses of no food. She has been in AA for years and her sponsor just died. Is this the reason for her relapse? Poor dear has no clue what it means to age gracefully. Dare I say her greatest addiction is to youth? Get up, get out of Hollywood, and get over it, lady. Your kneecaps are too wrinkled to wear short skirts. You are an embarrassment to your children. Go back to Sun Valley and grow old gracefully and in obscurity. Your mind is befuddled. Cut your hair, get some air, or push up daisies. Please.

Nutbags are just as ubiquitous over in England. Nothing compares to Sinead O’Connor. She was famous about 25 years ago because she shaved her head, tore up a picture of the Pope, and sang a song called Nothing Compares to You. O’Connor has been in the news recently because she decided to get married in Vegas looking like a fat, pink, tattooed version of Britney Spears when she was mad at Kevin Federline. Or maybe she looked more like a sea lion that was undergoing chemo. Either way, Sinead left her new doofus of a hubby two weeks after tying the knot. After that she Tweeted that they reconciled, but it only lasted a few days before they broke up again. Guess what? Now they’re back together! The guy looks normal, but he is a drug counselor so maybe he’s a bit bonkers himself. Maybe he’s looking for new clients? Too bad Sinead doesn’t look like she did back when she was actually famous for something, but the sex is probably still good, as it always is with the non compos mentis.