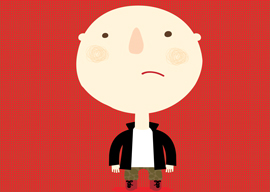 Late one night last week, radio host Anthony Cumia nearly became the Bernie Goetz of shock jocks. But unlike Goetz, he didn’t use his gun, even though he says he was carrying one when he was assaulted. Instead, he went on Twitter and ran his mouth after it happened. As a result, he lost his satellite radio gig and, presumably, the $3 million yearly salary that goes along with it.

Cumia, the cohost of The Opie and Anthony Show”which has been broadcasting in various incarnations for nearly twenty years and until last week had been running on Sirius XM Radio”says that after midnight on July 2 a black female approached him and punched him repeatedly under some scaffolding near Times Square. Cumia says he was out taking pictures”he’s allegedly a photography geek”when he captured a shot of the woman walking under the scaffolding. She’s framed almost in the center of the photo, so it would seem that she didn”t accidentally wind up in the shot.

“As far as I can tell, the term “shock jock” refers to any broadcaster who says things that no one would have found shocking 50 years ago.”

According to Cumia, the woman saw him snap the photo, indignantly stomped up to him, called him a “white motherfucker,” and belted him in the face. On Twitter shortly after the incident, Cumia wrote that he replied by calling her a “&$;;-:””since it’s six characters and the middle two characters are repeated, I’m going to go way out on the banana-tree limb and assume he means “nigger””whereupon she punched him five more times. Cumia says that about five black males then started hassling him.

He seems to have extricated himself from the situation without any significant loss of blood, at which point he went into full-on Charles Bronson/Clint Eastwood/Travis Bickle mode in the middle of the night on Twitter:

It’s really open season on white people in this day and age. No recourse. Fight back and you’re a racist. The predators know this. Good luck….They run things now. We’re done….There’s a deep seeded [sic] problem with violence in the black community. Try to address it and you’ll be exiled to racistville. But it’s real.

Here are a dozen of the more incendiary tweets from Cumia’s midsummer night’s verbal haranguing.

As far as I can tell, the term “shock jock” refers to any broadcaster who says things that no one would have found shocking 50 years ago. Though Cumia has buttered his bread for two decades as one of the country’s better known “shock jocks,” last week’s lava-belching Twitter tirade proved too shocking for his employer:

SiriusXM has terminated its relationship with Anthony Cumia of the Opie & Anthony channel. The decision was made, and Cumia informed, late Thursday, July 3 after careful consideration of his racially charged and hate-filled remarks on social media. Those remarks and postings are abhorrent to SiriusXM, and his behavior is wholly inconsistent with what SiriusXM represents.

But Cumia is far more than merely the latest celebrity victim of the ongoing Great Anti-Racist Purge. What adds an entirely different dimension to his case is the alleged real-life violence. At the time of this writing, his purported Negress assailant has yet to emerge to tell her side, but if Cumia’s not lying, his firing and one-way boat ticket to Racistville are evidence that in modern America, it’s considered worse for white people to say or think bad things about blacks than it is for blacks to physically assault whites. I suspect that Cumia drew more wrath upon himself for daring to mention black-on-white violence than he did for using words such as “cunt” and even the time-honored “nigger.” Acknowledging blacks’ overwhelming edge in American interracial-violence statistics these days is one of the things you can”t say if you expect to have a lucrative media career, no matter how true it might be. To keep your job, you have to pretend that the White Hate Nazi Klan Machine is still rolling along Mississippi Burning-style.