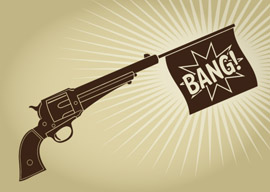 Last week, the 2016 Los Angeles Jewish Film Festival (LAJFF) concluded its weeklong series of screenings here on the L.A. Westside. It’s always a special time when the LAJFF comes to town, because when else are you going to see Jews in Beverly Hills? I didn”t attend any movie screenings (I was too cheap to buy a ticket), but I did attend one of the after-parties, as it was held just a few blocks from where I live. The movie chosen by the Chosen to open the festival wasn”t technically a movie, but an episode of the hit Israeli TV series False Flag. In Israel, the series is titled Kfulim, or “Doubles.” The opening-night gala screening was cosponsored by the Consulate General of Israel.

At the after-party, I paced my drinking well enough to speak coherently with some of the attendees. I asked several of the people associated with the series to explain the name change. Why not call it Doubles here in the U.S.? I received basically the same answer every time I posed the question. In America, claiming that something is a “false flag” is the newest conspiracy craze. It’s a hot, trendy buzzword among American conspiracy buffs (including conspiracy “celebrities” like Jesse Ventura, Steven Seagal, and Exene Cervenka). After the Umpqua Community College mass shooting last year, the local sheriff who investigated the crime turned out to be a false flag enthusiast. Following the San Bernardino massacre last December, attorneys for the family of the killers suggested that it was all a false flag setup.

False flag mania has now reached the point where the producers of a massively popular, high-profile Israeli TV series think the term is hip and familiar enough to garner their show attention and success in the U.S. There was a small air of condescension among some of the people with whom I spoke, a sense of (and I”m paraphrasing here) “if the goyim want to believe every Muslim act of terror is a false flag, we might as well profit from it.” Truth be told, I share that condescension. I wrote disdainfully about false flag conspiracy theorizing over a year ago, and after my experience at the LAJFF after-party, I thought it might be edifying to revisit the topic.

First off, it’s important to get an understanding of the definition of “false flag” among the conspiracy-minded. Initially, the term had a fairly simple meaning. It’s an operation designed to hide the true identity of the perpetrators of a crime while at the same time framing an innocent person or entity. Soldiers from country A dress in the uniforms of country B and carry out atrocities to make country B look bad. That has happened, no question. In fact, it’s an age-old war tactic, although so is claiming that something was a false flag when it wasn”t (country B actually does commit an atrocity and tries to weasel out of it by claiming, “No, it was people from country A wearing our uniforms! We wuz framed”).

Thanks to a dynamic partnership between trolls and lunatics, “false flag” has transmogrified into something very different these days. Now it is used to refer to fake events, hoaxes that were completely staged. “Crimes” (mass shootings, bombings, etc.) that involve no actual crime and no real victims. The “perpetrators” are all conspirators and the victims are all “crisis actors.”

Not only did Sandy Hook never happen, there is no Sandy Hook. Obama faked a town called Newtown and a school called Sandy Hook. Thousands of average people were hired to portray residents, neighbors, students, and administrators, and every member of the media was bribed to play along. There was no gunman, no victims. And of course, not one of the pretenders”not even the small children”has ever betrayed the secret (because we all know that 6-year-olds are the world’s best secret-keepers). Bataclan never happened. The Boston Marathon bombing and the Brussels airport attack? Never happened. The Santa Barbara mass shooting? Aurora? Roanoke? Charleston? San Bernardino? Fake, fake, fake. Crisis actors and stage blood.

I”ve had several prominent false flaggots tell me that I was an “inspiration” for this lunacy during my Holocaust revisionist years. “You”re the one who taught me, man, to, like, examine film clips and photos for tiny clues to expose hoaxes!” I hear that more times than I”d like to say, so permit me to set the record straight: If you think my work poring over documents and taking a magnifier to historical ruins is in any way equal to what false flag nutjobs do these days, you”ve completely missed the point of my work. Please stop giving me credit, and, while you”re at it, stop sending me so many damn friend requests.

As a way of trying to make karmic amends for any role I might have played in encouraging false flag mania, I”ll outline just a few reasons why this kind of thinking is sloppy, wrong, and counterproductive.

To begin with, none of the celebrated false flag experts can point to a single provable example of a thousand people staging a crime scene and keeping it secret. In a widely disseminated piece, found on just about every false flag site in existence, detailing 56 “government admitted” false flags, not one example involves actors pretending that a crime or war atrocity occurred. There is not one single example of a faked incident in which the victims were playacting. The closest thing on the list is the case of an Italian cop who cut his own jacket in order to claim he was stabbed (and this was not a “government” crime; the cop was prosecuted for lying). All of the other examples are of genuine crimes that were, in some cases, falsely blamed on an innocent person or entity. And some of those examples aren”t really false flags at all.

The list includes the Katyn Forest massacre. That wasn”t a “false flag.” The Soviets invaded the eastern half of Poland. They rounded up Polish nationals and killed them. They committed the crime as themselves, as Soviets; they didn”t pretend to be anyone else. When the Nazis discovered the bodies, the Soviets panicked and said, “We didn”t do it. The Germans found the bodies; they must”ve done it!” (In international law, this argument is known as the “He Who Smelt It” defense.) Saying “I didn”t do it” isn”t a “false flag”; the Soviets simply lied. The list also claims that the Reichstag fire was a “false flag.” That’s sheer pseudohistory. Very few historians still believe that the Nazis were behind the fire; most agree that communist agitator Marinus van der Lubbe was the sole arsonist.

If there’s zero proof for previous “playacted” mass crimes, there’s an equal paucity of evidence that they”re suddenly, for some reason, happening every month now. False flaggots are incompetent when it comes to evidence because they work backwards; they reach their conclusions first, and interpret the evidence to support what they”ve already decided to be true. This is the exact opposite of everything I tried to impart as a revisionist historian. Having decided in advance that an event is a false flag, they look for rationalizations, a way to claim that a particular piece of evidence supports their conclusion, even if the claim contradicts one they made a week ago.

Speaking of Lanza, another “proof” is that he was supposedly too small to adequately handle a firearm. The San Bernardino killer’s family attorney mirrored this sentiment when calling false flag in the case of female shooter Tashfeen Malik: “She’s probably about 90 pounds, so it’s unlikely she could even carry a weapon or wear some type of a vest or do any of this. It just doesn”t make sense for these two to be able to act like some kind of Bonnie and Clyde or something.”

Too petite to be like Bonnie Parker? Parker was 4-foot-10, 90 pounds. But what are facts to a false flaggot? After the Boston Marathon and Brussels airport bombings, flaggots claimed that scenes of victims with their clothing torn by the explosions were proof of a false flag. “Look at those pants”they look like they were shredded with scissors! Only a “sheeple” could believe that a bomb can blow off clothes but not the skin underneath.” Now, you can show a loon like that the footage of a man in China standing next to an exploding manhole and getting his clothes neatly blown off while his white undershirt stays intact, but they”ll just accuse you of being part of the conspiracy (hell, they”ll probably claim that the Chinese faked the manhole explosion just to trick “em). I have one false flaggot among my Facebook friends who used the “pants blown away” argument to declare the Brussels attack a fake, only”a month later”to post photos of what he agreed was a real terrorist attack, the ANC’s 1983 Church Street bombing in South Africa. And guess what? Those photos show a victim with his pants similarly blown away.