Fatalism Attraction Part I: The Protocols of the Larry Elders of Zion 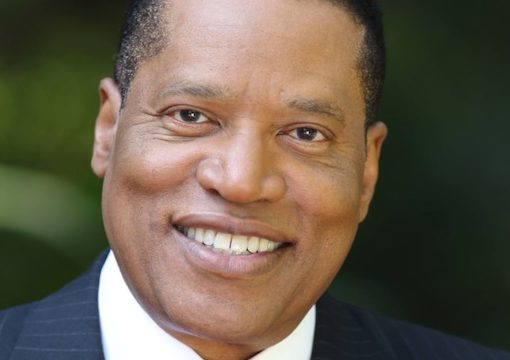 When Larry Elder announced his candidacy in the goober-natorial recall election, I had a gut feeling that I’d be hearing from the media. Larry and I used to be close friends (before I got “canceled”), and these days I’m what I like to call “toxic twice removed,” meaning that I’m often used to tar someone who knows someone who knows me (Matt Gaetz was attacked in the press for knowing someone who knows me, as was former congressman Dana Rohrabacher). Therefore anyone who actually knows (or knew) me is vulnerable.

So it seemed highly likely that at some point some media hack would come a-callin’…especially if our unbiased journalistic betters became fearful enough that Larry might win.

And fearful they became, about three weeks ago when the recall polling was neck and neck. It genuinely looked like Newsom was in trouble, so the media got desperate. Real desperate. Desperate enough to call me.

“This is not the guy I knew; my Larry Elder wouldn’t have been so clumsy.”

It was a lazy Thursday August morning and I rolled myself out of bed around 11:30 a.m., early for me but hey, I’m a go-getter. And I saw that since 9 a.m. a reporter from the L.A. Times had been emailing me and calling my landline. “I’m on deadline,” she declared, and she simply had to speak with me about Larry Elder!

The woman in question was Harriet Ryan, the L.A. Times’ star investigative reporter who’s one prize putz (correction: She’s won a Pulitzer Prize). I was impressed that she found my landline, as I never give that out to anyone but friends. Then again, I should’ve expected such dogged investigative skills from someone with a Wurlitzer.

I called the lady back. Even tired and hungover, I never fear talking to the press. Plus, she was transparent as a jellyfish. I knew exactly what she wanted. I knew it the moment I saw her email. And she was not being subtle about it now that we were speaking. She wanted me to tell her that at some point in my friendship with Larry, I’d said something Holocaust deniery to him, and he’d concurred. She was not even fishing for it; fishing requires patience. She was as unsubtle as Gallagher smashing a melon, but much funnier, if unintentionally.

What she wanted to hear was, “Well, there was this one time Larry and I were sitting by his infinity pool in the backyard of his hilltop McMansion, and I said to him, ‘You know, them Jews dun faked the Holohoax,’ and he said ‘Hah, I knew it!’”

But I couldn’t give her that. First, because it never happened. Second, because it’s not something I would ever say (because I’m not a denier). And third, if I ever had said something as asinine, Larry would’ve severed our friendship…which he eventually did, but out of cowardice not conscience. Although he didn’t precipitate my cancellation, Larry furthered it and profited from it. So there’s some bitterness in play, and Ms. Kibitzer Prize knew it. She kept trying to poke me on that sore spot (I’m paraphrasing here, but basically she was like, “He abandoned you when you were canceled! He’s a man of poor character! Why cover for such a guy?”).

And yeah, for a brief moment—one of those “time stops and you step out of your body” moments—I thought to myself, I could totally get revenge against Larry without harming my own rep, because even though I’m not a denier, I could concoct some story about telling Larry something that an actual denier had said, and then being shocked when he agreed with it.

Dave (sipping a poolside drink): “You know, Larry, there’s this French denier, Robert Faurisson, who says the proof the Holocaust is a lie is that Jews are inveterate liars.”

Larry (loading handgun with Confederate flag on the grip): “Well, I’m glad someone has the guts to admit it.”

If I’d have invented such a grotesque tale, the Times would’ve run with it, because when it comes to attacking Larry Elder and defending Gavin Newsom, all matters of journalistic ethics get tossed out the window. But I’m not a monster. That’s kinda the point about why my cancellation was unjust. I repeatedly stressed to Ms. Ryan that I’m not a denier (I taxed her patience with digressions about how I even have a judicial ruling attesting to that fact), I never say denier things, I never said anything deniery to Larry, and I never heard Larry say anything deniery to me. I told her that of course, as “David Stein the mainstream Holocaust filmmaker,” I discussed the Holocaust with Larry on multiple occasions. Everyone back in those days knew me as a respected Holocaust expert. But I made sure she understood that Larry had no idea I was the infamous David Cole, and while we often discussed the fascinating minutiae of Holocaust history, denial never entered into it.

I furthermore added that my opinion of Larry’s character was irrelevant. As a lifelong Californian, I told her that I’d love to see a Governor Elder. “I voted for the bastard, and I’m glad I did.”

After about forty minutes, Ryan finally gave up, defeated. No Howitzer for this one. I emailed a few of my friends: “I think I may have thwarted a Larry Elder hit piece.” They were skeptical, but I was fairly confident. I hadn’t given Ryan a single usable sentence, and even though the Times is not above outright fabrication, generally—in much the same way that cops rely on the stupidity of criminals to make arrests—mainstream media hacks rely on the stupidity of interview subjects to feed them something they can exploit. I’ve been dealing with these monkeys for 32 years, and I’ve learned a thing or two.

So when three weeks passed and there was no Elder/Cole “exposé,” I allowed myself a moment of smug self-satisfaction: “Well, sonofabitch, I’m the most clever and virtuous mutherfucker alive. I outsmarted the L.A. Times and, in so doing, did a huge favor for a guy who, though he wronged me, is badly needed by our state, because that’s the selfless little saint I am.”

But reality soon delivered a swift kick to my dirlywanger, because the fact is, the Times editors abandoned the story not because I outfoxed them, but because they didn’t need to run it. Following my interview, Larry began nose-diving with the speed of a Millennial Germanwings pilot.

Rather than sponsoring voter drives, rather than making use of the (unfortunately) totally legal paths to voter, if not fraud, let’s say “assistance” made possible by California’s mail-in ballot system, our local MAGAs held weekend brawls in which they’d rumble with Antifa, sometimes about masks, sometimes about vax mandates, sometimes for no other reason than just because (it’s important to note that the MAGA street brawls were not defensive; the MAGAs were often the instigators). This is BLM’s last laugh, and as much as I despise those thugs, you gotta give the debbil his due. BLM managed to tear up this city, then manipulate our MAGAs into thinking that rioting is the coolest thing ever, so that the MAGAs would get in on the action, at which point BLM could pivot and be like, “Egad, these violent right-wing rioters must be stopped! Where are the police when you need them?”

Kinda like if Tom Sawyer had wanted to burn the fence instead of paint it, so he chars a small portion, makes a big show of how much fun he’s having, and entices his friends Maga McImbecile and Trumpo Tardigan to burn the rest. And then Tom runs to the cops and casts himself as the champion of fence preservation, demanding that the vandals be thrown in solitary confinement for nine months.

When you get outplayed by BLM—an org comprising people many of whom can’t read beyond a third-grade level—you really should go home and rethink your life.

And as some MAGAs employed “street action” in opposition to things (vax and mask mandates) that would disappear if Elder simply won the election, others descended like locusts upon poor Larry when he told a local newspaper that he didn’t believe the vote-stealing Venezuelan robot pedophile adrenochrome satanist 2020 vote fraud theories of Powell, Wood, and Liddell. Larry started to lose so much support on the right that he humiliatingly reversed himself, giving a “redo” interview that was such the opposite of the first one, the side-by-side clips went viral as an example of how the guy can flip like a light switch if a few hundred Capitol-riot-supporting dipshits bully him.

Then came the biggest stumble of all: Larry, who’d initially made it clear that he was not in the race to talk about abortion, was manipulated by pro-lifers into talking about abortion. Larry’s camp tried to do damage control, but there was no unringing that bell curve.

This is not the guy I knew; my Larry Elder wouldn’t have been so clumsy. Maybe it’s the pain meds he takes for his bad back.

We were “abortion on demand” before Roe v. Wade. It’s written into our fucking state constitution. No governor could reverse it on his own, period (it would take a state constitutional amendment). Threatening to outlaw abortion is guaranteed political suicide in California. Larry knew that going in…but the foolishly suicidal demands of his base proved stronger than his spine.

The polls now show Newsom doing so well, there’s no need for reporters to dredge up ol’ Dave Cole. They’re gonna win this one without having to invoke my name.

And MAGAs (and rightists in general) will attribute that defeat to voter fraud while denying any complicity in the loss, as they revert to the fatalism that’s become their security blanket since Trump lost (“Why bother even trying to win? Venezuelan satanist robots are gonna steal it from us anyway”).

That aspect will be explored next week in Part II.