Fear of an Erudite White 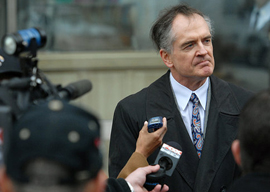 In a culture where “the racist””who is always white”has been the most crudely stereotyped stock villain over the past generation, Taylor stubbornly (yet politely) breaks the mold. You can tell he’s a different breed merely by the way he pronounces the word “white””rather than an illiterate cracker drawl that sounds like “waht,” he ever-so-properly aspirates the “wh” so that it sounds instead like “hwite.”

He’s one erudite white. And they hate that. The foot soldiers of egalitarian thought control would rather that all “racists” range from mildly to severely retarded. But to their preciously inviolable little narrative’s detriment, Taylor is a trilingual Yale grad who has written two books, edited several anthologies, and published the monthly newsletter American Renaissance for two decades. What confounds, perplexes, and infuriates his antagonists is that he’s obviously not stupid, yet he stubbornly refuses to see the world as they do.

Bereft of solid arguments against him, they rely on the crutch of false accusations. He’s been consistently mislabeled a “white supremacist,” an odd moniker for someone who once said, “I think Asians are objectively superior to whites by just about any measure that you can come up with in terms of what are the ingredients for a successful society.”

“He presents his case like a District Attorney, minus the moralistic grandstanding and cheap appeals to emotion.”

And though he’s always painted as a “hatemonger,” I”ve never seen him huff and puff with genocidal glee at a specific racial demographic’s literal death as that fat little hamster Tim Wise has. In fact, I”ve only witnessed hatred being directed at Jared Taylor. At a scheduled 2007 debate in Halifax, a crew of violent agitators wearing masks”you know, just like the Klan!”forcibly ejected Taylor from the room before the debate started. Anti-racist busybodies were able to shut down the last two American Renaissance conferences merely by engaging in such compassionately humanitarian tactics as phoning in death threats to the hotels where they were to be held. They even show up to hassle him when he holds press conferences about being hassled.

This is not the behavior of intellectuals, but of religious fanatics. Their hysterically censorious actions are not those of people who feel they”ve won the debate, but of those who fear that if their god were held up to the harsh light of logical scrutiny, it might shrivel up and die.

White Identity is Jared Taylor’s first full-length solo opus since 1992’s Paved With Good Intentions and is written in the same dispassionately lean, brick-by brick, Wall of Facts style. He presents his case like a District Attorney, minus the moralistic grandstanding and cheap appeals to emotion.

Taylor notes that by today’s definition of what it has supposedly always meant to be an American, every US president up to JFK would be deemed a virulently hateful white supremacist merely for expressing the sort of group instincts that remain uncontested”even loudly encouraged”among nonwhites to this day. He says American society’s downward slide was greatly enabled by the 1944 publication of Gunnar Myrdal’s landmark sociological tome An American Dilemma, which posited that white racism was the primary (if not sole) cause of black poverty. Nearly ten years later came Gordon Allport’s The Nature of Prejudice, which proposed the idea of “contact theory””that racial and ethnic tension were caused by a lack of contact among divergent racial groups rather than, say, unwanted, coerced, and persistent contact in cramped quarters while competing for dwindling resources. Armed with the untested and unproved hypotheses that white racism was alone to blame for black underachievement and that lack of contact rather than direct contact led to racial tension, social theorists and their political bedfellows set about to radically transform American demographics.

In one passage Taylor trots out an Orwellian litany of American politicians mouthing nigglingly slight variations on the platitude that “Diversity is our greatest strength,” yet his open challenge for anyone to explain what benefits diversity has brought us beyond a wider selection of restaurants remains unanswered. He presents a devastating case that forced integration has been a titanic failure as well as a direct cause of cultural Balkanization and national decline. In neighborhoods, churches, prisons, and school cafeterias”everywhere that they aren”t forced by law to mingle”the seemingly intractable natural tendency is for ethnic groups to self-segregate.