Feminism As a Mating Strategy Among Beta Males 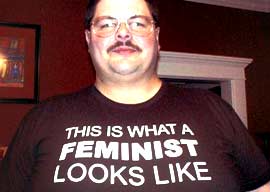 First they came for the male feminists, and no one spoke out”because no one likes them, not even the female feminists.

Dearest faithful reader, I”m a man who finds something to dislike about nearly everything and everyone, yet even I find male feminists to be especially grating”they”re perched wayyyy up near the top of my “Don”t Like “Em” list. The very term “male feminist” seems as masochistically counterintuitive as “black Klansman,” “Jewish Nazi,” or “white Democrat.” Sure, one expects women to be feminists, just as one should expect all living organisms to be motivated by self-interest, but there’s something downright gender-traitorous about male feminism. Self-loathing is not an attractive trait in any of God’s creatures, and these dweebs are the Benedict Arnolds of the Invisible Biological Brotherhood.

The white knight gallops in quickly and wants you to look at his shiny white horse, because if you took a long hard look at him, you”d never agree to get on that horse and go galloping into the sunset with him.

Seriously”have you seen many of these self-proclaimed male feminists? When I see all these sullen dorks standing like political prisoners holding their “I NEED FEMINISM BECAUSE…” signs, I wish that one of them could be honest and say they need feminism because they”re not naturally attractive to women.

I therefore posit that in at least some cases, male feminism is a mating strategy for men who aren”t getting laid on the virtues of being men alone. So they switch gears and attempt to get laid on the merits of proclaiming to be feminist “allies.” The “allies” thing is all lies. It is a sneaky way of trying to appeal to women by loudly proclaiming that you hate the type of guy who normally appeals to women. I believe the most reasonable explanation for the very existence of the modern “male feminist” is rooted in evolutionary biology: Calling oneself a male feminist is a deceptive and despicable little shame-dance, a pathetic self-puffing mating ritual that beta male lizards do to garner even a scrap of female attention.

It’s like going to some pro-marijuana rally because you know someone there is going to have weed. If you hang around enough girl feminists long enough and claim to be a feminist, sooner or later one of them will fuck you…maybe…right?

I theorize that these genetic-lotto losers”who tend to be either too fat or too skinny yet are invariably too unhandsome”obviously aren”t going to sow much seed being the uninspiring specimens of near-manhood that they are, so they appeal to feminine wiles in a sort of Hail Mary pass.

But their untrained and unskilled minds don”t grasp that you don”t have to be a male feminist to get laid; in fact, all the available evidence suggests it’s an impediment. I would go so far as to pay top dollar for verified scientific evidence of a woman lubricating to the sound of a man saying, “I’m a feminist.”

For all that they claim to be women’s natural allies, these schmucks don”t have the first clue about female psychology, or they wouldn”t need to turn to feminism as a sort of invisible date-rape drug. To these self-centered bitter little men bouncing around in their baby bubbles, it’s not really about empathizing with women at all, because they obviously don”t understand how women operate; it’s about scoring with women. It is in this sense that male feminists are more misogynistic than, well, you know, the misogynists. Failing desperately in the categories of natural charm and sex appeal, male feminists seek to gain access to women’s bodies via deception.

Male feminists are therefore, by my own tortured logic, the biggest enemy that modern women currently face. They excuse and thereby enable the worst excesses of female feminist behavior while symbolically cuckolding their own entire gender on the outside chance that one of these girls will sooner or later consent to giving him oral.