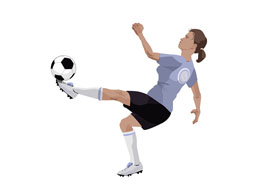 “Equal pay for equal work should be a fundamental principle of our economy,” bellowed President Obama on Tuesday while commemorating Equal Pay Day. “It’s the idea that whether you”re a high school teacher, a business executive, or a professional soccer player or tennis player, your work should be equally valued and rewarded, whether you are a man or a woman.” Somebody get this guy an editor. He could do with a researcher, too, if the soccer mention was a shout-out to the complaint the U.S. women’s soccer players brought to the Equal Employment Commission. They have had enough of getting paid less than male soccer players, and the left is taking the ball and running with it.

Unfortunately, breaking down exactly who earns more and why involves boring man stuff like running numbers. The U.S. Soccer Federation figured they would take in about $24M last year but were surprised to discover they earned almost twice that and women earned $5.8M more than men. There are dozens of other factors involved in this supposed coup. The Women’s World Cup brought in a lot of money, but the whole event was so expensive it actually lost money. Women get a base salary whereas men don”t. Obama can pretend it’s as simple as equal work for equal pay, but it’s not even close. Even The Guardian admits that the pay structure is a “tangled web.” It would be like proving actors make more money than bankers. You”d have to find a candidate from each side with the exact same experience and then focus on an area that shares the same demand. You”d also have to factor in the history of both cultures. Men’s soccer in America goes back to 1913 and the women’s team has only been around since 1985. The demand for women’s soccer is definitely on the rise, but it’s still in its infancy and dwarfed overall by the men’s, especially when you factor in the rest of the world. Manchester City is the richest club in England. They”re in the semifinals of the Champions League and also own New York City FC in the MLS. The average gate at the Etihad Stadium is around 50,000, while the women’s Man U is lucky to get 2K.

“I haven”t heard this many complaints come from the island of Lesbos since we sent half a million refugees there.”

The U.S. women’s soccer controversy isn”t an example of sexist oppression. It’s a new team in a culture of sport that goes back at least 100 years demanding instant gratification after having a good year. Oh, and one more thing. The deal they”re complaining about was set up by their union. There is no way this will hold up in court because it’s nobody’s fault but their own. All this boring math doesn”t make for a sexy feminist slogan so a Facebook meme was born that claims the U.S. women’s soccer players “generated $20M more than the men’s team and were paid almost 4 times less.” This is the version of events the left ran with and they”re still running with it, hard. Hillary Clinton jumped in right after Obama and now the presumably predominantly lesbian team is threatening to boycott the Olympics. I haven”t heard this many complaints come from the island of Lesbos since we sent half a million refugees there.

To question any of this is to deny women their equality. Sorry, ladies, if you want to play with the big boys, you”re going to get hurt. Apparently even their injuries are the result of sexism. Most of us assume the higher rate of concussions and knee injuries comes from the fact that women are different from men. They”re not. It’s the artificial turf that keeps hurting women. Every Women’s World Cup has been played on turf and wiping out on it is way more painful than grass. The science behind this is elusive and has something to do with the plastic grass sticking more than real grass so you get more severe road rash when you wipe out. Poor babies. I come from a world of real soccer, where men would play in thunderstorms on pitches that looked like mud pits. Real soccer doesn”t include bitching about a rash. It doesn”t include any injuries. When Bert Trautmann broke his neck in 1956 he played through, hoping it would get better. When Stuart Pearce broke his leg in 2000 he tried to run it off. Feminists would like to subject women to these same kinds of standards. That’s downright dangerous.