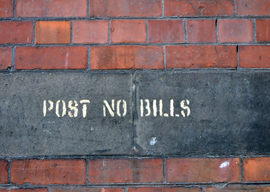 Congratulations, Taki’s! You made the big time!

And by “big time” I mean, er, a bunch of telephone poles in one Toronto neighborhood.

Right after Trump’s election, this poster was discovered duct-taped around East York:

HEY WHITE PERSON!
Are you tired of political correctness?
Wondering why only white countries have to become “multicultural”?
Figuring out that diversity only means “less white people”?
Sick of being blamed for all the world’s problems?
Tired of being told you”re “racist” for celebrating your heritage?
Disgusted by the garbage on television?
Don”t see a future for yourself and your family?
Questioning when immigration will stop?
Join the Alt-Right

There follows a list of recommended “alt-right” websites, one of which is Takimag.com.

I recognize only a couple of other sites mentioned, not because I”ve ever visited them, but because they get talked about online as notoriously “white nationalist.”

So basically, this is a handbill advertising mostly obscure blogs, beneath questions that tens of millions of folks would categorize as “valid, if a little brusque.”

“Why are we poo-pooing the very notion of increased “racism” when that gives us another thing to blame on Obama?“

Now, because Canada in general and Toronto are peaceful, prosperous, and problem-free, moral-preeners treated the appearance of these posters as the sequel to Kristallnacht“and, more important, an opportunity to parade their own smug superiority across various media outlets for days. “Police are investigating,” we were constantly assured, while residents put up their own super faggoty posters praising “love” and “diversity” and “tolerance” and “immigrants.”

“This is not what Toronto’s all about,” was the oft-repeated phrase, a particularly ironic choice of words considering another bunch of recently seen posters, this time professionally produced and displayed all over public transit. This series of ads warns that Toronto is a hotbed of racial intolerance.

So, the message conveyed to the public by both posters is:

Head’s up! There are lots of angry white people around here!

But of course, only one of these “campaigns” is being investigated as a “hate crime”…

Speaking of public transit, the virtue-signaling volume amplified as the week went on, after a “racially charged“ exchange on a Toronto streetcar was caught on someone’s cell phone and uploaded to Twitter:

A white guy (in a hard hat, no less) allegedly asked a nonwhite guy to turn down his music, yelled, “Go back to your fucking country,” then claimed he was being attacked even though no physical altercation was captured on video. “At one point,” said a witness, “I called the [white] guy a racist and he said, “Yeah, so what? Go Trump.””

Now, a lot of conservatives were eager to write off this flurry of “hatred,” including a rash of anti-Semitic graffiti in Toronto and elsewhere, as stunts staged by desperate “progressives” to advance their losing narrative. And yes, tons of “hate crime” hoaxes have been exposed across the U.S. since Hillary’s election loss. Leave it to Canadians to imitate this pathetic Yankee fad, eh?

These conservatives may very well be right that this “hate wave” is simply a series of political soccer dives.

But what if they aren”t?

Before I elaborate, first permit me to shit on another popular postelection talking point:

Even leftist heroes like Michael Moore and Jon Stewart have scolded their comrades for pushing the “Trump voters are all racists” meme. Both men express incredulity that citizens in the roughly 200 counties that voted for Obama twice suddenly turned “racist” this year. Conservatives are expressing “strange new respect” for both men.