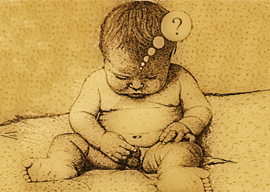 I was recently a guest at my best friend’s house, but I was shocked by the way she lives and was so happy to get out of there! Her place is a dump. Either she thinks this is normal and OK or maybe she is bordering on crazy. I always thought she was a bit off. The house is clean”do not get me wrong”it is also big. However, there are definite issues with running water, water pressure, hot water, leaky roof, bug infestations, and a collection of mangy animals in the backyard. She seems oblivious! Should I tell her in the hopes that she changes her ways?

On a brighter note, just because you should keep your mouth shut and your opinions to yourself does not mean you have to subject yourself to glorified camping conditions. You never have to go back. Talk to her on Skype or meet her in a hotel cocktail lounge”anyplace but her house!

“You all expect your son to have the same chin, build, and nose as his father. So why would you ever exempt the penis?”

My 70-year-old father recently committed suicide. He had been diagnosed with cancer and given six months to live. He killed himself about two weeks after the bad news. I am extremely mad because I think it was selfish of him. He was going to die in six months anyway. Why the rush? Why not give us a chance to get used to the idea of saying goodbye and actually have an opportunity to say what we wanted and needed to say to him before he left? I don”t know how to deal with my anger and sadness. I just don”t understand why he did this!

While suicide is the coward’s way out”because it is 100% percent easier to be dead than alive”one must also consider that it is no easy task to actually pull the trigger, step off the ledge, or sit in your garage and inhale exhaust fumes. Next time you go to the beach, try drowning yourself in the ocean; it is impossible! Your survival instincts will overcome your conscious intentions and your body will force you to head back above water to breathe (assuming you know how to swim). This only goes to prove how determined, scared, or desperate a person must be to follow through with taking his own life.

The prospect of dying slowly and painfully was obviously too much for your father to bear. He was a scared man. He could have decided to drink or experiment with drugs to pass the time. He could have chosen to travel and see the things he always wanted to see but never did. He could have recorded video messages for all his loved ones as an eternal memento. So it’s OK to be mad”very mad”because he gave no consideration as to how his actions would affect his family. He was profoundly selfish when he decided to not say goodbye or give you a chance to say goodbye. He robbed you of your last moments with him, and you can never get them back.

Maybe his impatience was a result of the frenetic world we live in where everything has to get done, and get done now. Maybe he thought, “Why wait around? Let’s get this thing over with and move on” while completely ignoring the fact that life’s only certainty is death, so there is absolutely no reason why anyone should be fussed about getting it done.