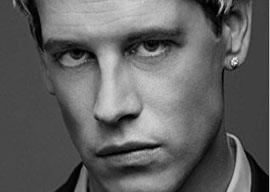 In the lead-up to the Fahrenheit 451 reenactment planned for Milo Yiannopoulos” upcoming book Dangerous, Buzzfeed and its coterie ran pieces on the incendiary’s previous forays into publishing. Under the pseudonym Milo Andreas Wagner, Yiannopoulos didn”t just self-publish two books of poetry, but also coedited a critical anthology on Buffy the Vampire Slayer‘s fifth season.

Snark aside, they also allege plagiarism with a link to an article documenting how he “misquoted” Tori Amos and “blended lines” of other songs without attribution. (He thanks Amos on an acknowledgement page, but that’s not really proper MLA format, is it?)

And true to Buzzfeed’s form, it features digestible experts of a live-tweeting reacting to Milo’s Eskimo Papoose. Based on the user’s jokes at unconventional numbering, vapors from the page breaks between sections, and appeal to Shakespeare’s restless grave, it’s safe to assume that neither he nor Buzzfeed has ever read any poetry published after the invention of Times New Roman.

So in the spirit of those journalists who sought to disprove that Meryl Streep was overrated by showing she was highly rated, we might employ a bit of fact-checking of our own.

Firstly, poets haven”t used footnotes unironically since T.S. Eliot ruined them for everybody. Eliot also said that “good writers borrow, great writers steal,” but we needn”t go that far. So despite plagiarism becoming the new weighing witches against Bibles, found poetry”the unclassier the better”has lain in postmodernity’s foundation for decades.

And fourthly (see what I did there, would-be poetry readers?), painting Milo with the failed-artist-turned-fascist brush doesn”t address the performance art he depicts off the page. Not only does this line of attack reflect the “failing pile of garbage” epithet Trump uses against these publications, but wasn”t “Daddy Trump” offensive because it embodied the left’s yearning for a president who is both a responsive lover (ibid.) and understanding father (Andrew Sullivan)? What’s more, as he holds the mirror up to liberal nature, he conforms to modern art’s mantra: If you”re not seen, you don”t exist. And lately he’s been existing a lot.

In fact, one might wonder whether this idealism of Berkeley (both the philosopher and the campus) isn”t also reflected somewhere else. Just as views and clicks translate to aesthetic success, who now contends that elections and airtime amount to successful policy?

But we can learn other lessons besides that what’s sauce for the liberal goose sucks for the conservative gander. In one of the article’s telling moments, the live-tweeter finds an allusion to Milo’s autobiographical brush with sexual violence and lets his heart bleed only momentarily enough to feel “kind of sad.” Sadder is the way too many believe saying the F-word on a crowded campus is more violent than the actual physical assault on its speaker.

Furthermore, Milo’s performance art also reveals something about our use of tokens. Whether it’s the minority Republican or the rich Democrat, both sides have employed their own versions of ecce homo: “Behold the suffering partisan, a stumbling block for the left and foolishness for the right.” Thereby they mitigate the fears of one constituency or claim the party’s tenets are so convincing that the token follows them against his best interests.