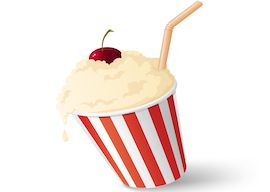 In the grand tradition of primates tossing feces at perceived rivals, leftists in the UK have lately taken to throwing milkshakes at right-leaning figures they hyperbolically refer to as fascists. And as with the multifarious nasty things that they do, they justify it in the name of some “greater good” that they are comically incapable of quantifying or even articulating.

Once again we see the absurd and grating tendency of leftists to justify physical assault based on the warped notion that certain ideas inevitably lead to…well…physical assault.

The trend apparently began early in May when Danyal Mahmud, a 23-year-old Muslim living in England, threw a milkshake in the face of anti-Islamist agitator Tommy Robinson, who was born Stephen Yaxley-Lennon. By Mahmud’s own admission, he had joined a group of leftist protesters in taunting Robinson by chanting that he was “scum”—again, leftists see nothing wrong with dehumanizing others based on the premise that the people they are dehumanizing deserve it because they, um, dehumanize others—before Robinson and some cohorts came over to have a little chat about the prevalence of Muslim grooming gangs in England. Mahmud apparently couldn’t handle the discussion and dumped his shake on Robinson’s head, which immediately led to Mahmud receiving a beating.

Just like a woman who hits her partner and then claims victimhood when he hits back, the man who called Robinson “scum” and assaulted him with a milkshake is now whining that he feels under threat:

I’m a low-key person, I didn’t anticipate this publicity and I don’t want it—I’m getting death threats on social media and I am worried about me and my family being targeted.

“In the grand tradition of primates tossing feces at perceived rivals, leftists in the UK have lately taken to throwing milkshakes at right-leaning figures.”

Well, maybe you shouldn’t have targeted him by calling him “scum” and pouring a milkshake over his head, no? (I realize the question is an exercise in futility, because by definition, ideologues are blind to their own hypocrisy.)

It wasn’t the last time Robinson would be “milkshaked”—a “protestor” assaulted him with a shake the very next day. In case you weren’t aware, the mainstream media have now taken to referring to leftists who assault people on the streets as “protestors.” If you doubt that, when was the last time you heard the American press refer to the violent leftists in Charlottesville as “rioters”? Nope, they were almost exclusively referred to as either “protestors” or “peaceful protestors.”

Next in line for a milkshaking was Carl Benjamin, a UKIP candidate who is best known as the YouTuber Sargon of Akkad. It would be the fourth time he received this treatment and likely not the last.

The milkshaking trend had metastasized to the point where last week, police in Edinburgh asked a McDonald’s to cease selling milkshakes near where Brexit Party alpha dog Nigel Farage was scheduled to speak. McDonald’s complied, but Farage got milkshaked anyway by a fat, balding, bearded, bespectacled male progressive—why do they ALL adopt that most hideous of styles?—who purchased his banana-and-salted-caramel shake from a local Five Guys restaurant and then made the atypical decision to not guzzle it down and pack more suet on his frame. The perp, 32-year-old Paul Crowther, justified the assault in the name of a higher cause:

I didn’t know he [Farage] was in town. I thought this is my only chance. It’s a right of protest against people like him. The bile and the racism he spouts out in this country is far more damaging than a bit of milkshake to his front.

Hey, tubby—care to wipe the self-satisfied smirk off your face long enough to prove how saying “England should get out of the EU” amounts to bile and racism that causes massive damage? No? Didn’t think so.

Crowther was arrested and charged with assault because in England, as in America, tossing a milkshake at someone is legally considered an act of violence.

On Twitter, Farage bemoaned the fact that the modern left is so assured of their unimpeachable goodness that they don’t even bother to discuss things anymore:

Sadly some remainers have become radicalised, to the extent that normal campaigning is becoming impossible. For a civilised democracy to work you need the losers [sic] consent, politicians not accepting the referendum result have led us to this.

Last week an 81-year-old Brexit Party member was assaulted with a milkshake, as was a reporter for Breitbart UK.

Unless you count the scene in the 1971 film Billy Jack where the local rednecks pour flour over a Native American girl’s head to make her white, I can’t recall the last time an alleged “right-winger” decided to throw food on someone as an act of political protest. And in the film, the rednecks get their brains beaten out by Billy Jack—and it’s considered a perfectly righteous thing to do. And, mind you, this was a movie.

Yet for most of my life I’ve witnessed leftists throw eggs and glitter and pies and shoes at people they consider unacceptably “right-wing.” One thing the leftist press neglected to mention about all those “peaceful anti-racist protesters” in Charlottesville is that they threw urine-and-feces-filled balloons at their perceived ideological opponents and justified it because that’s just what you do to “Nazis.” And though these types would likely cheer the scene where Billy Jack stomps the rednecks into the ground, it never seems to occur to them that they might be begging for a similar ass-whipping.

Mainstream media outlets such as The New York Times and CNN earnestly attempted to justify “why” this milkshaking trend is happening.

Newsweek paints the phenomenon as harmless “absurdist memetic humor,” while The Guardian, blithely ignoring 100% of reality, argues that the trend “represents a frustration with traditional media’s failure to hold the far right to account.” Why, it’s almost is if the “traditional media” hasn’t portrayed the “far right” as Satan incarnate for at least a generation!

Benjamin Franks, a professor at the University of Glasgow, twists himself into a pretzel to justify milkshaking as a noble reaction to the cancerous scourge of whiteness:

It turns a symbol used by the alt right — milk — to symbolize ‘whiteness’ and to mock ethnic groups with a greater predisposition to lactose intolerance, into an image of dramatic opposition.

All right, then, in the name of fairness, would it be wrong to suggest that perhaps some right-wing “protestor” should accost Mr. Franks on the street and shove an unpeeled banana up his ass? Or, as podcaster Mike Enoch recently asked, if tossing a milkshake at someone isn’t an act of violence, would it be OK if he threw one at a Jew?

Milkshaking apologists have also scoffed at the idea that this is a slippery slope and that if we justify tossing milkshakes, soon we’ll justify throwing bricks. Sorry, but this has already happened: Muslim activists recently threw bricks at supporters of Tommy Robinson, while an English woman said that Nigel Farage should have acid lobbed in his face. And just as Burger King appeared to suggest that they supported milkshaking, a British beer manufacturer recently said that its clients shouldn’t waste their beer on “fascists” and should instead clobber them with bricks.

And the modern left is so predictable, we all know that even after 100,000 milkshakings, if one intrepid “right-winger” were to respond by knocking out someone’s teeth, this would be all the evidence the left would need to “prove” that the right wing is violent and needs to be exterminated.

Noble cause corruption refers to the tendency of hardcore ideologues to perform a psychological trick upon themselves whereby they justify the most rancid and despicable acts of aggression so long as these deeds are committed in the name of a higher cause. Modern leftists are champions at arguing that it’s perfectly good to preemptively kill someone merely based on the notion that the victim’s ideas will inevitably lead to murder. So long as you’ve identified a “folk devil” and tagged them as bad, it’s impossible to be guilty of doing anything bad to them.

The modern left’s heads are so far up their own asses with the idea that they are unimpeachably good, I suspect they may all soon suffocate to death. Or maybe that’s simply wishful thinking.