First They Came for the Bakers 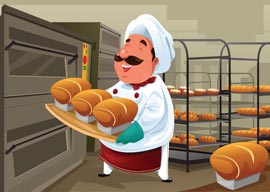 All countries are traditions based on religion and genetics, though in irreligious countries they don’t know it. And all European countries these days seem to be in very big trouble.

The Republic of Ireland, where until the 1990s divorce was illegal, is about to vote on whether to institute homosexual marriage. Incredibly – in Ireland! –  all the political parties are in favor and people who are opposed are being told that they are bigots. Society is constantly persecuting and the intolerance of the old days has given way to a new intolerance. It’s sad for those of us who thought Eire used to be a shining city on a hill.

It’s customary at this point to deny being a homophobe, so I had better do so. The two closest friends I ever had were lesbians and I am completely broad minded in practice, if not in theory. I share Garrett Fitzgerald’s mindset. After reading some complicated text from his civil servants when he was Taoiseach he was reputed to have said “Well, that’s alright in practice, but how does it work in theory?”

“What if a Muslim baker was asked to bake a cake for a homosexual wedding?”

But why should homosexuals want to marry? What was attractive about them was the secrecy and sense of being outsiders, like Communists or Catholics. They should, one feels, drink absinthe and read decadent French poetry. Instead they want respectability, children and PTA meetings.

The Irish referendum result will be affected by the decision yesterday in Northern Ireland to convict some devout Presbyterian bakers who refused to bake a cake with the slogan ‘Support Gay Marriage’ on it. The bakers didn”t refuse to sell cakes to homosexuals, as until a few years ago it was any baker’s ancient Common Law right to do, but they simply refused to bake one saying “Support Gay Marriage” as you or I might do if we didn”t support gay marriage. There were no doubt socially liberal or venal bakers who would have done so, but someone was trying to make a point. The poor bakers were being set up.

It’s always devout bakers whom homosexual activists pick on and try to ruin. There have been many cases in different countries involving bakers being asked to bake cakes for homosexual weddings and what splendid moral courage the Christian bakers show, quite unsupported by the clergy. Some have lost fortunes in fines. Meanwhile, bishops talk of global warming.”¨”¨

The backlash against the court’s decision might just be enough to swing the vote against homosexual marriage in the South but if it does there will be another vote, as always happens. The electorate originally voted not to legalize divorce in Southern Ireland but in these circumstances the electorate continues to vote until they get the answer right. Then no more votes. It’s the same with referendums on European treaties. “¨”¨

Before homosexual marriage is on the statute books in one country after another, even religious ones like the USA, it becomes socially unacceptable to oppose the idea. Homosexuality has become one of the few things European societies hold sacred, as it was in some cults in pagan Rome.

What would the Guardian and liberal clergymen like Dr. Giles Fraser say then? It would be an irresistible force meeting an immovable object. Liberal Anglicans pretend to think that Jesus, a first-century rabbi, would have thought homosexual acts were fine and dandy. Though they don”t care what the early church thought about the matter they do respect the view of the Koran. But liberals, who canted about freedom and free speech when the cartoonists in Paris were murdered, don”t think free speech should extend to what you write or don’t write on cakes.