Fit to Be Fat 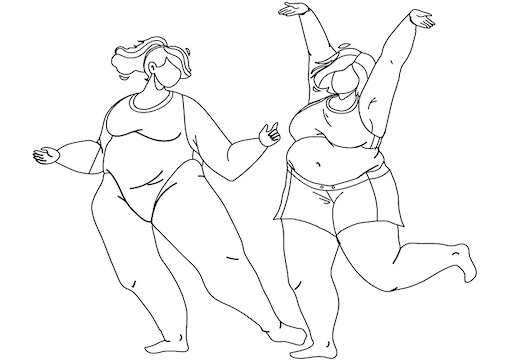 A curious example of the power of social trends on thought is that two years into the Covid pandemic, nobody of any influence has yet bothered to launch a campaign to persuade Americans to do the one obvious non-pharmaceutical intervention that would make Americans healthier whether the virus stays or goes: lose some weight.

Instead, 2022 has seen new gains in the long, grinding campaign to make the fat another of those privileged classes whose self-image cannot be affronted.

For example, Nike, with its $3.6 billion ad budget, tweeted out under the title “Styles for Self Love” a picture of a 250-pound black woman dressed head to toe in Nike garb and looking mighty pleased with herself.

“The idea of making yourself more resilient against Covid by dropping ten or twenty pounds has not caught on.”

Similarly, Self magazine devoted its “Future of Fitness” issue to Maoist-style self-criticism, with articles like “The Relentless Reality of Anti-Fatness in Fitness.” (Well, yeah, that’s kind of the point of all that exercising: to not be fat.) Not surprisingly, that article was also illustrated with a photo of another smug 250-pound black woman.

Yet, it’s not a secret that heaviness is a major risk factor for both Covid and a host of other ailments. The Centers for Disease Control advises:

Having obesity may triple the risk of hospitalization due to a COVID-19 infection.

But the idea of making yourself more resilient against Covid (not to mention heart attack, stroke, diabetes, and so forth) by dropping ten or twenty pounds has not caught on.

Why not? Unlike the unvaccinated, who are widely seen as worthy of hate and unlikely to ever be powerful enough to get revenge, the fat are increasingly to be feared.

It’s not that the fat rank terribly high on the pyramid of intersectionality…yet. But you can imagine that they might someday, and thus you can foresee yourself having your career canceled in, say, 2029 over some fat jokes you told in 2022.

You never know. I mean, did you foresee in 2013 that dudes in dresses would soon be sacred? Granted, the average fat person isn’t as tirelessly diligent in forcing the rest of us to acknowledge and submit to his or her preferred self-image as is a heterosexual man in a frock with one tasteful strand of pearls. But there are a lot more fat folks than there are ex-men.

So, better not to say anything for your permanent record.

Of course, it’s by no means assured that the overweight will ever garner one of those much-coveted spots high on the totem pole of wokeness.

One factor that is likely to retard the rise of fat power is that few members of the American Establishment are personally fat. Indeed, they haven’t been for a long time. I can recall finding it puzzling around 1980 when my father (born 1917) would launch into a populist diatribe against the “fat cats” since few of the rich were overweight then, or now. I believe he was thinking of J.P. Morgan (1837–1913).

That helps account for the paradox of how few famous people still in the prime of their careers have died of Covid. (See this Wikipedia list of people who are notable enough to have a Wikipedia page and who expired of Covid. Count how many you’ve heard of in the past decade.)

One cluster of still-active minor celebrities who died of Covid are several anti-vaccine talk-radio hosts. Perhaps that’s because radio is one of the few performing careers where you don’t have to watch your weight.

Among whites, blue states like California tend to be skinnier than red states like Texas. For example, the state with the fittest residents is likely to be high-altitude Colorado, which at the beginning of the century was the pride of the Republican-leaning states but has since trended Democratic.

So, the fat set off alarms in the media that in a rematch they might vote for Trump rather than Biden (who, for all his flaws, has managed to stay practically the same weight his entire half-century in the national eye).

On the other hand, black women rank very near the top of the intersectional heap, and they are the heaviest of them all.

Even among American women these days, African-American women are particularly obese. In the most recent federal NHANES study from 2017 to 2018 (NHANES periodically measures the girth of Americans so the clothing industry can know how much to inflate their sizes), 57 percent of black women were classified as obese (BMI of 30 or greater), compared to 44 percent of Hispanic women, 40 percent of whites, and 17 percent of Asians.

In the previous NHANES report for 2015–2016, the average weight of black women was 186 pounds versus white women at 171. This is age-adjusted to take into account that whites are older on average. White women (averaging 5′ 4.3″) are 0.3″ taller than black women, so it’s fair to compare weights.

Among the shorter races, Latinas average 169 pounds and Asians only 132.

Black men, however, may be in better shape than white men, weighing 198 pounds compared to 202 for whites (who are, however, a fraction of an inch taller on average.)

This quantifies a general problem that black women face in the modern marriage market in which interracial marriage is not only accepted, but is increasingly promoted in television commercials.

As I pointed out 25 years ago in my “Is Love Colorblind?” article, in the 1990 Census black men were about 2.5 times as likely to be married to a white woman as black women were to be wed to a white man. So, black women tend to be the biggest losers from the growth of interracial relationships.

A fair amount of the current craziness in American life is due to black women feeling threatened by women of other races, which, according to the custom of the time, they must blame on our society’s all-purpose whipping boys, white men.

Black women might be happiest under the old antimiscegenation laws outlawed by the Supreme Court in 1967, but that’s inconceivable to the contemporary mind. So, educated black women have tended to ardently adopt Foucaultian social constructionism because it seems to assure them that black men can be badgered into changing their tastes away from skinnier white (not to mention Asian) women. Hence, during the Racial Reckoning, black women demand to be admired for their fatness, as they would be in some African countries.

(It’s hard to know what M. Foucault himself would say about the widespread belief in 2022 that he proved that, come the revolution, fat women will attract handsome men: Personally, he never bothered to deconstruct his own sexual proclivities, which killed him via AIDS.)

Still, black women’s desire to have their body shape and hair type be more appreciated isn’t a wholly ridiculous hope. Different looks have gone in and out of fashion: After WWI, for instance, flat-chested flappers were all the rage, while after WWII, voluptuous Italian movie goddesses were the ideal.

More radically, in Mauritania on the southern edge of the Sahara, extreme fatness is the feminine ideal, with girls being force-fed up to 16,000 calories per day by professional “fatteners” to make them more attractive to suitors.

Perhaps much of many white women’s current enthusiasm for all things black and antiwhite is motivated by their hoping black women will serve as the cutting edge of Fat Liberation? Maybe white women are enthusiastic about black women being presently idealized as the epitome of beauty because they sense that if the media can force us to adore large-and-in-charge black women, then they can ease off on the dieting themselves, without having to worry about competition from Asian women?