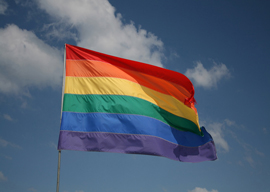 My gay cousin once told me that the beauty of modern living is that there are so many different ways to have a family. I was inclined to agree with him, although my unorthodox upbringing gave me a desire to either have a conventional family or none at all. For people like me, the traditional family trumps the modern family hands down. But that’s my choice, and I don”t seek to impose my preferences on others.

When the subject of gay marriage became a hot-button issue a few years back I remember thinking that if enough people want something they should be allowed to have it without anyone or anything”especially the government”standing in the way.

But at this point I would be happy if I never heard another word about gay marriage again. Against my naive hope that people might be able to live and let live, gay marriage has divided the country, if not the world. I am sick to death of having gay marriage stuffed down my throat by supporters as well as detractors. Why am I being punished for minding my own business?

Unfortunately it doesn”t look like I will find relief anytime soon. Freak flags and anti-freak flags are flying higher than ever before. Damn you all!

“Why can”t we all agree that the freedom to choose our own identity is no one’s business but our own?”

Last week in the Netherlands a plump and balding man in his mid-forties married two”yes, two”pudgy, ginger-haired women. The bisexual thirty-something pudgy gingers married each other as well”it was a mariage Ã  trois, so to speak. Technically it was a civil union, but both brides wore white. The trio are treating their unusual partnership like any other. And why not? However ridiculous it might seem to you or me, it obviously means a lot to them.

In Scotland, two lesbians recently held a mock wedding outside of the Parliament. Whether they will also lobby for the right to a mariage Ã  trois in a religious ceremony remains to be seen. Congressman Barney Frank just tied the knot with his partner James Ready. Clearly the modern marriage has gone mainstream. Yet there are still busybodies and do-gooders who have the time and energy to care about how other people live their lives.

Brad Pitt’s mother is not a fan of gay marriage. She recently chastised the president for his stance in her local newspaper, supporting Mitt Romney and his “Christian conviction concerning homosexuality.” She’s clearly misinformed about Romney’s stance on gays, and her comments obviously didn”t go over well in her son’s community. Now she’s the target of nasty attacks from the Hollywood media and has even received death threats. We all know how relentless those liberal bullies can be.