For Whom the Cat Calls 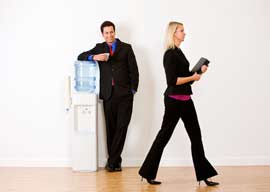 A video that shows a Jewish woman being sexually harassed while walking on New York City streets has engendered tremendous outrage”not so much for the fact that she was sexually harassed, but because there weren”t enough white guys doing it.

Watching the two-minute clip”which was released last Tuesday and already has over 30 million views”I have to agree that blacks and Hispanics outnumber white men on it. The film’s director and producer Rob Bliss”who had a camera concealed in his backpack as he walked Manhattan’s streets in front of female stunt harassment victim Shoshana Roberts“claims that of the 18 incidents of sexual harassment documented in the video, six of them were by white dudes.

It’s hard to judge since all of the street creeps” faces are blurred out and many white fellas these days pathetically emulate the black urban street patois, but like Bliss I also counted six peckerwoods among the 18 “harassers.” And I put the term “harassers” in quotes because apparently asking a woman, “How are you doing today?” and “How are you this morning?” now constitute sexual harassment. As anyone familiar with heterosexual female psychology knows, it’s a scientifically established fact that women hate when men find them desirable and would much prefer that men ignore them entirely as if they were old and ugly.

The creepiest segment involves a man who silently walked alongside of Ms. Roberts for what the captions claim is a total of five minutes. That man, as luck would have it, is black.

“There is a definite racial bias in rape”it’s biased against white women, with black males as the perpetrators.”

Black female author Roxane Gay tweeted that “the racial politics of the video are fucked up. Like, she didn’t walk through any white neighborhoods?”

Writing for Slate, Hanna Rosin“professional yenta and author of The End of Men and The Rise of Women“throws facts to the wind and accuses Rob Bliss of “editing out all the catcalling white guys.” Also at Slate, the mostly black Dee Lockett (she obviously has some cream in her coffee) carps that “White men…have no use for that sort of catcalling. They marked their territory centuries ago.”

Chris Hayes of MSNBC, the most lesbian-looking male currently on television, claimed that he declined to air the video because, again, white men were not pulling their fair share of sexual harassment.

Because the worst possible thing throughout history, from the Big Bang to here and then unto eternity”in this universe and in all the universes from here to Timbuktu and even Cleveland and its surrounding surburbs”is to be called a racist, director Rob Bliss gingerly tried explaining that white harassers weren”t intentionally edited out for racist reasons:

We got a fair amount of white guys, but for whatever reason, a lot of what they said was in passing, or off camera. So their scenes were a lot shorter, but the numbers themselves are relatively even.

Whew. That’s reassuring. Because sexual harassment is wrong, we wouldn”t want men of any given group not performing a sufficient amount of it, right?

So let’s take a look at the best available statistics regarding interracial rape and sexual assault, shall we?

I pored over all 13 PDFs from the U.S. Department of Justice’s National Crime Victimization Survey from 1996-2008. In case you”d like to peruse these documents yourself, interracial sexual-assault stats for each year are listed on a table entitled “Percent distribution of single-offender victimizations, based on race of victims, by type of crime and perceived race of offender.”