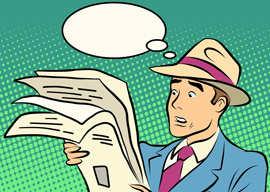 Let it not be said that I started the indignant repulsion. That honor belongs to Takimag’s own Joan of Snarkadia, the great Kathy Shaidle.

Her latest call to arms over the trans-tyrants and their political enablers is beyond noble. Telling these private-parts despots to cram it is a necessary counteroffensive on the quickly receding culture-war front. If liberals aren”t stood up to in the most explicitly forceful terms, then they win.

In that spirit, I welcome the mordant fusillade Donald Trump has launched on the corrupt fourth estate. In a recent press conference, he let loose over inquiries about his donations to veterans groups. The media, Trump maintained, has been dishonest about his charitable work. “I have never received such bad publicity for doing a good job,” the billionaire bawled. He went on to call the political press “among the most dishonest people that I’ve ever met,” and even referred to ABC News reporter Tom Llamas as “a sleaze.”

At one point, Daily Mail reporter David Martosko attempted to clear the air by telling Trump, “You”ve set a new bar for the press corps, calling us losers to our faces.” He followed up by asking, “Is this what it’s going to be like if we”re covering you?”

“Trump’s screw-you approach to the media is more refreshing than a midnight plunge in the Arctic.”

Be still my beating heart.

Trump’s screw-you approach to the media is more refreshing than a midnight plunge in the Arctic. It disarms all criticism because it’s shameless and unrelenting. Trump’s smart enough to know that the press will never give him a fair shake. He’s a Republican, after all. The GOP presidential nominee has been, since time immemorial, a veritable piÃ±ata for journalists to bash with leftist sound bites.

Remember when, in a 2012 debate between President Obama and former governor Mitt Romney, CNN’s Candy Crowley openly sided with the president? Romney criticized Obama for not immediately describing the attack on the U.S. consulate in Benghazi as an “act of terror.” Obama denied the charge. Crowley, seeing the liberal president in peril, interjected herself into the back-and-forth and backed Obama, falsely corroborating his claim.

Are Republicans really supposed to keep cowering to this blatant favoritism in the media? If Trump had been debating Obama, he would have told Crowley to shut her burrito-gorging mouth and know her place.

The Crowley debacle was by no means new. Painfully apparent liberal bias is almost a daily occurrence in what passes for professional journalism. Journo heavyweight Katie Couric was just caught fabricating a part of her antigun documentary to make gun owners appear stupid. The Daily Show edited footage of Gavin McInnes to again make right-wingers look like backwards, idiotic rednecks. Last year, The New York Times distorted Loyola University economist Walter Block’s words to depict libertarians as supporters of slavery, even though Block said that slavery is the antithesis of free association.

On and on it goes, with little pushback from conservatives outside of their own echo-chamber blogs. Instead of directly confronting the insidious press cabal, many on the right are quick to surrender for a few minutes of fame. Several weeks ago, after a whistle-blower revealed that Facebook censors conservative content from the social platform’s news feed, the supposed luminaries of conservatism sold out to Lord Zuckerberg in his palatial headquarters. King of the cucks Glenn Beck even wrote a glowing admiration of the creator of the new thought police.