Friends (With Benefits) of the Earth 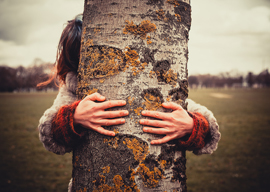 I hate the Earth.

Yeah, I hate all the other planets, too, but what I mean is:

Nowadays, conservatives are supposed to pretend to care about stuff like equality and gay “marriage” and the poor and the environment. I don”t.

I feel like I did when I joined AA: A group that I”d heard was all about bootstrapping, strong coffee, and God turned into New Age loser headquarters pretty much the second I walked through the doors.

Likewise, I thought the right was where a misanthropic, Scrooge McDuck snob like me could finally find a home, and what happened? “No Child Left Behind” and “crunchy conservatism.”

In Canada, we”ve got people running for the party leadership who appear to actually believe in global warming instead of simply (and unconvincingly) pretending to, like the last guy. Some are even vowing to bring in”get this”carbon taxes. Whereas I think recycling and composting are gay, and intentionally turn on all the lights during Earth Hour.

“Those who devote their lives to annoying the rest of us with their make-believe “identities” now have a novel alternative to gender-bending.”

Across the West, it’s become depressingly commonplace to hear alleged right-wingers yammer on about planetary “stewardship.” Whereas the faster Earth is clear cut and polluted, the closer I”ll be to living in a Jetsons apartment on stilts, eating pills for food.

Look, I like nature as long as it’s domesticated and cultivated: a well-kept-up public park or lovingly tended botanical garden. One of my favorite places, Niagara Falls on the Canadian side, strikes the perfect balance: Come for the thundering cataracts, stay for the casino and the Flying Saucer Restaurant.

But in general, I”m not a fan. For one thing, nature is mostly brown and green, the two ugliest colors. It’s also full of bugs and other nasty creatures. It’s dirty.

Seeing the Rocky Mountains or the Grand Canyon doesn”t make me feel small. Quite the opposite: Instead, they remind me of mankind’s potential for greatness. Those things are beautiful accidents, thrown up by mindless tectonic twitches. They”re nowhere near as awe-inspiring as Hearst Castle or even the Vegas strip. The Group of Seven‘s landscapes are infinitely superior to the real things.

And that’s exactly what some people are reportedly doing.

Ecosexuality is a term with wide-ranging definitions, which vary depending on who you ask. Amanda Morgan, a faculty member at the UNLV School of Community Health Sciences who is involved in the ecosexual movement, says that ecosexuality could be measured in a sense not unlike the Kinsey Scale: On one end, it encompasses people who try to use sustainable sex products, or who enjoy skinny dipping and naked hiking. On the other are “people who roll around in the dirt having an orgasm covered in potting soil,” she said. “There are people who fuck trees, or masturbate under a waterfall.”

I see Annie Sprinkle is deeply involved, as she has been in every “sexuality” trend or cause since the “70s. She’s basically the Ralph Nader of screwing. Also inevitably, this “movement” boasts its little batch of books and documentaries, and of course, they”re campaigning to get “E” added to that ever-metastasizing perverts” acronym.

In fact, some of those involved seem to possess something like a sense of fun, describing “ecosexuality as a means of moving beyond the “depressing Al Gore stuff” that people often associate with environmentalism.”

But why? That “depressing” aspect hasn”t prevented millions of idiots from adopting Gore’s junk science as their new religion, and making him and other hucksters breathtakingly wealthy. In that respect, ecosexuality is a solution in search of a problem.