From Beautiful Bullock to Ghastly Gaddafi 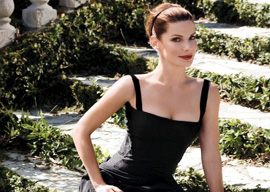 NEW YORK—They say when sexual attraction sets in, all other brain functions shut down. It’s nature’s way of ensuring procreation. My brain shut down last week, and for a Hollywood actress to boot. Of German extraction, Sandra Bullock is not the classic Aryan goddess, but she’s most attractive in the flesh, more so than on the screen. I ran into her at Michael Mailer’s birthday party. He threw the bash in his famous father’s old house in Brooklyn, a wonderful location overlooking New York Harbor, a place that brought back many memories of wild nights with Norman Mailer. Jimmy Toback, screenwriter for Bugsy and the director of Harvey Keitel’s gem of a movie, Fingers—the only American film ever remade as a French movie—has directed some of Michael’s films, so we talked about sons and old movies. (Jimmy is an avid Spectator reader and likes it when I make it obvious how much I love my son, as he has an 11-year-old.) Under the much maligned studio production code, sexuality’s elemental power was ever-present for a very simple reason. There was no nudity, only steamy buildups. Sophisticated innuendo will do more for sex than any full frontal. These days there’s no more mystery, no flirtation, no romance, no sizzle. Even the female body has changed. I used to die for Ava Gardner’s and Betty Grable’s curves, but today’s so-called men go for the efficient, sterile, athletic, desexualized look. What I’d like to know is whether people in their 20s really are as stupid as the characters in today’s movies. Most definitely, I’d say, especially if they listen to rock music.

“In my experience, when people vow to fight to the last bullet, they flee at the sound of the first shot.”

The party broke up at dawn, and I left just before John Taki and his beautiful girlfriend hit the road. “Go home, daddy, you’re going to have a heart attack,” was the last rude thing I heard.

The next day I read in the paper how Sandra Bullock had given one million dollars for Japan’s victims, a small fact she failed to mention the night before. Now that’s what I call true giving. Every last penny will go where it’s needed, unlike so many charities which spend the majority of donations on themselves.

Speaking of Japan, here’s an American black female professional basketball player, a college grad who can hardly write or speak coherently, Tweeting about the earthquake: “God…makes no mistakes….They did pearl harbor so u can’t expect anything less.” Four years ago, this muscle-bound, brain-dead, poor excuse of a woman demanded that a radio host be fired for some on-air racial insensitivity—he called her teammates mop-topped—and managed it. Tells us a lot about bogus diplomas and bogus racial sensitivities in the home of the depraved.