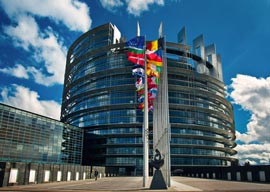 The Charter of Fundamental Rights of the European Union was drafted in 2000 and came into force in 2009 when the European Union countries signed the Treaty of Lisbon. The aim of the charter was to “enshrine political, social and economic rights for European Union citizens and residents,” and like the Convention on Human Rights it is legally binding. All EU legislation must be consistent with the charter when it comes into effect.

When the Treaty of Lisbon was signed in 2009 and the charter became legally binding, the European Parliament was also granted increased legislative power and was put on equal footing with the Council of EU Ministers. This was an unfortunate concurrence of events for the future of the European Union for a number of reasons.

Someone once described the European Parliament to me as being like “a massive NGO” based on the reality that “the left” here holds absolute sway. The parliament’s ongoing interpretation of the Fundamental Rights charter”the Fundamental Rights report”is a perfect case in point. For a mechanism that was supposed to protect the various “rights” of people in the EU, the charter is rather becoming a means to terrorize Europeans whilst granting rights to anyone and everyone else.

“The Fundamental Rights reports get more authoritarian every year. What is most striking about them, though, is that they don”t appear to address the rights of actual Europeans.”

The Charter of Fundamental Rights preaches “tolerance,” “freedom,” and specifically “freedom of thought.” Yet it is obvious that the European Parliament interprets this in a very specific manner. It allows you freedom to think what you like only so long as you don”t think certain things and only think like it tells you to.

The Fundamental Rights reports get more authoritarian every year. What is most striking about them, though, is that they don”t appear to address the rights of actual Europeans.

The language is the first giveaway. The report consists of countless paragraphs that “express deep concern” about, are “alarmed at,” or even “strongly deplore” all sorts of activities of Europeans. For example, it expresses concern “at the alarming increase in the number of violations of fundamental rights in the EU.” But this refers to the rights of non-Europeans specifically. The report is in fact berating EU citizens for “discrimination and intolerance especially against certain communities” and lists immigrants as the most vulnerable community.

What is most worrying for the future of the European Union is that the content of the reports is also frequently utterly detached from reality. This is proving dangerous as Europe is trying to deal with the current migrant crisis. In fact, the EU’s interpretation of the Fundamental Rights charter in this context is in large part to blame for the scale of the problem.

For example, at a time when unbelievable numbers of people are coming to Europe, the 2015 Fundamental Rights report puts particular emphasis on “fundamental-rights-sensitive border controls.” This is the European Parliament’s way of saying that anyone is welcome to come in and stay. The report actually flags up that taking someone’s fingerprints against their will could be a violation of their fundamental rights.

An extreme example of how irresponsible this is would be a member of ISIS not being checked upon entry to Europe. The man or woman could then pass through Europe from one country to the next. They would remain unchecked and their presence unknown because of the EU’s Schengen Agreement, which means there are no borders between EU countries.