Gates ’n’ Guns in the Ghetto 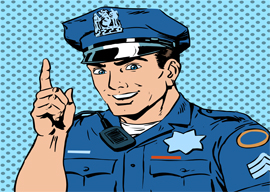 I hate to say this, because the last thing I ever want to sound like is a writer for Salon, but damn, this “debate” over school shootings is so very…white. I’ve mentioned before, and it bears repeating at the moment, that as a child I attended majority black L.A. public schools. Well, “majority black” is an accurate label for my junior high. My high school would be better described as Zimbabwe. This was during the first half of the 1980s, when the crack epidemic was in full swing, and black gangs, specifically the Crips and Bloods, ruled the streets of “black L.A.” and routinely battled over turf and drug profits.

Yet I don’t have a single story to tell about on-campus violence. Not one. No on-campus shootings, stabbings, or gang fights. Why? Because the campuses of my junior high and high school were always on lockdown. There were only a few designated entry and exit points, and armed security officers stood at both. Everything else was gated up, chained up, and sealed up. The point of the gates and the guns was twofold: prevent truancy by making escape harder than at Rikers, and prevent off-campus gang members from sneaking onto campus to buy or sell drugs, or to fight. And wouldn’t you know it, the parents of the minority white students were fine with this arrangement. No weepy-teary cries about how “we’ve militarized our schools! We’re mentally scarring the poor baby-wabies!” But these days, I turn on cable news and inevitably there’s some white suburban soccer mom wailing about how “we can’t turn our schools into armed compounds!” Funny how the leftist parents of my white and Jewish schoolmates never had that attitude when those gates and those guards were there to keep little Rachel and Josh and Becky safe from the specter of gun-totin’ pipe-smokin’ niggas. Back then, gates and guns were not just unobtrusive, but welcome.

And guess what—nobody got “scarred.” You know what would have “scarred” us? Daily gang fights, and the constant threat of stray bullets. Not only did the gates and guns not scar my precious little peer group of white and Jewish kids, but in fact, we found the security reassuring. We’d have been the first to complain had some blubbering leftist hag come on campus screeching about how “schools are not a place for guns and chained doors!” We’d have told an old biddy like that to get bent. But now, as the nation amuses itself with its newest “soul-searching debate,” this time over school shootings, we’re told that the notion of gates and guns on campus is the worst thing since Auschwitz.

“Folks, we’re not dealing with James Bond villains here. These are teens.”

It should be noted that the schools I attended didn’t just have gates and guns. We also had security officers with nads of steel. At my junior high, our security guy was nicknamed “Baretta,” after Robert Blake’s TV crime-fighter (our “Baretta” was Hispanic, but to a black kid, that might as well have been Italian). And Baretta would take your ass down if you misbehaved. I never saw him draw his weapon, but boy, did I see a few choke holds (always preventative, always in order to stop a brewing fight between students).

At my high school, our head of security was a suave, middle-aged black gentleman who was packing, and he made sure we knew it. I saw him draw his weapon only once. My fellow theater geeks and I were rehearsing a production of A Soldier’s Play (plays with black majority casts did well at my school), and one of the white actors, a blond-haired, redneck hillbilly type with the last name of Rocheford (which I always found humorous, as I tend to associate a surname like that with someone of class and breeding), thought it would be hilarious to take the toy gun he was using in the play and “draw” on our security guy (there’s them hillbilly smarts for ya!). Rocheford crept up behind the dude, pulled out the gun, and yelled, “Reach for it.” And within a split second Rocheford found himself staring down the barrel of the kind of gun that makes black men mull just how lucky they feel. But Rocheford, being white, merely pissed himself. And, far from being “scarred” by having witnessed a gun drawn on campus, the rest of us found the episode quite funny.

So how can I possibly relate to the howling harridans of white suburbia who bemoan turning schools into “armed compounds”? For six years that was my life, and nothing seemed out of the ordinary. Just the opposite; the “gates ’n’ guns” policy made perfect sense to me, my friends, and our parents.

Look, I get the argument. Some Americans worry that “guns ’n’ gates” means giving in to fear and “surrendering” to the shooters. But that’s like saying that wearing a condom means surrendering to AIDS. Like it or not, school shootings are a “thing” in the U.S. We can debate for the next 200 years why they’re a thing, but that doesn’t change the fact that they are, just as crack and gangs were things of concern to L.A. schoolkids in the early ’80s. Yes, school shootings are not as common as the media likes to make them seem. But frankly, incidents in which Muslims ram vehicles into crowds of pedestrians are not exactly commonplace either. But still, this type of terrorist act has become a “thing” among Muslims, and the fact that it isn’t a daily occurrence hasn’t stopped cities in the U.S. and Europe from installing traffic barriers. Whatever the long-term solutions to that problem (well, there’s really only one: stop importing Muslims), it’s simple common sense that in the meantime we put up traffic barriers. In other words, stem the bleeding in triage before sending the patient into surgery.

Everyone is so obsessed with finding a “cure” for school shootings. We debate, over and over, the correct “final solution,” without stopping to ask if there can ever actually be one. Now, maybe one day we’ll hit upon a perfect one-size-fits-all answer. But as we debate, let’s at least acknowledge something that everyone, from the gun grabbers to the gun hoarders, from the “blame mental illness” crowd to the “blame violent video games” advocates, knows to be true: School shooters always reference (and appear to be influenced by) previous school shootings. This is because teens are prone to fads, which is because teens are very, very stupid. They are tiny-brained, feebleminded followers who rarely think things through and have not yet grasped notions like “consequences.” Throw a little mental illness, or a few bottles of prescription “behavioral control” drugs, into that mix, and you don’t just get a monster, but a moronic and highly impressionable monster. What’s necessary at the moment is to stop the fad, slow the trend, halt the cycle of shootings. If that means that a generation of poor widdle kiddies has to go to school with gates and guns (as I did), so be it.

To be sure, the recent Parkland shooting is unique in that every possible ball that could have been dropped was. Literally, no one did anything right, beyond the concerned tipsters who bafflingly believed that the FBI would take a pause from partisan hackery to investigate an actual crime. But the FBI isn’t going to get any better, at least not while Trump’s in office and FBI agents continue to dedicate their lives to “the resistance.” So fuck ’em; let’s not even consider those dolts. Let’s just look at Deputy Barney Fife (a.k.a. Scot Peterson), the scared-of-his-own-shadow, do-nothing Parkland school security chief. To reiterate a point I made earlier, at my high school, our head security guy, though always polite, nevertheless made it clear that he would drop you like a skeet pigeon if he had to. And at the start of every day, and during lunchtime (when students were allowed to go off campus to eat), there were only two points of entry to the school, both flanked by security guys, and no one was allowed in without proper student identification. Had a Nikolas Cruz type—an ex-student with no current school ID—tried to gain entry, he’d have been surrounded by two armed men with guns and a willingness to use them.

The tandem guards were located inside the school, so they could not be targeted from outside. You walked through the doorway, and there’d be one on each side of you. Sure, under such circumstances a teen could still come in blasting, but I would add that, along with being stupid and impressionable, teens are also very, very cowardly. The idea of engaging in a firefight with someone they know will shoot back is probably unappealing to most of them. Teens only find courage in large groups or when their opponent is helpless. And yes, potential shooters can still climb a fence or a wall, but forcing them to do so adds one more piece of suspicious activity that, in theory, could be spotted and reported. Plus, along with being stupid, impressionable, and cowardly, teens are also preternaturally lazy. Nobody shirks hard work like a teen, so a few physical obstacles might not be a bad idea.