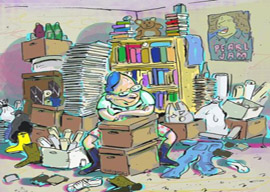 I am 25 and my 56-year-old dad, who is still married to my mother, just came out and announced his intention to leave us for his lover”his male lover. He was very apologetic and sad about the whole thing but I am angry”very angry”and I feel betrayed. I foresee a lot of therapy in my future and have NO desire to speak to my father, that two-faced lying bastard. I want to get back at him for lying all these years. Any suggestions?

Fortunately or unfortunately, whichever way you please, your father did not grow up in a time when gay men were allowed to prance around in the streets and sing of their gayness with pride and delight.  He did what most gay men did before him: He found a wife, started a family, and led a double life. The problem is that by the time he was 40, the world had changed. Gay men became Ãber-chic and society celebrated them as if they”d discovered the Fountain of Youth.

Should he have stayed his planned course that was drawn up under the long years of oppression? Of course. However, all the prancing men laid out before him on TV, movies and in magazines, receiving all sorts of praise and kudos for bravery, style, and flair was probably more than he could take. To his credit, he obviously tried to resist the need to belong to the popular crowd and be the cool kid in town because he waited until 2011 to shave his “beard.”

“You have to understand and try to accept your New Gay Dad.”

You have to understand and try to accept your New Gay Dad. Hopefully he is actually a secret weapon, a stealth bomber of sorts because he, like a woman, can tell you which dress looks better and he can chit-chat about boys, but unlike any other woman he has gone under radar into the men’s realm. Use him wisely!

Had he been a man of your generation who married and had children, the only thing to say would be “Shame on you,” but given the timing of your father’s predicament I think you have to forgive him for his deceit.

My son, age 25, is a teacher, and I am embarrassed. I know that sounds snobby and terrible but I can”t help myself. When you have a little boy, at least when I had a little boy, the absolute last thing I thought he would be is a grade-school teacher”an astronaut, an investment banker, or even a fireman, but not a teacher. I am not sure if it is because of the money or the lack thereof involved in teaching or maybe it is the fact that teaching is 100% un-flashy and un-fun, but I hate telling my friends what he does and I want him to quit. I am hesitant to bring it up. Do you think I can say something?

No, no, no, I don”t think you should breathe one molecule of negative energy in his direction. It seems you are more interested in telling your friends your son works on Wall Street, or is headed to the moon on Monday, or is starting up a company or saving people from burning buildings simply for your own amusement. Not many flashy stories to share with the girls on bridge night or by the pool on Wednesday afternoons? Hopefully he did not choose his occupation to supply you with electrifying stories to outshine your friends.

Ideally a teacher should be patient, interested in others, and interesting enough to hold people’s attention long enough to teach them something. If such traits embarrass you, then I am embarrassed on his behalf over your shallowness! Be proud of him. It takes a brilliant person to interest schoolchildren of any age”much more brilliant, not to mention socially valuable, than any number-cruncher or astronaut will ever be. We don”t really need to fly around Mars 10 times, but we desperately need to teach children how to read, write, and think.

If you absolutely must, tell your friends he works for the police or the CIA and his teaching job is only a cover. Then you can tell flashy stories to your heart’s content. Make sure they understand you are breaking all sorts of rules and breaching national security on very delicate matters, and if anyone”anyone“talks, they can”t even give a knowing nod to your son or people will be eliminated.