Give Hate a Chance 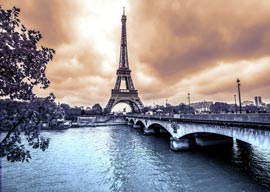 J”aime Paris. And by “aime” I mean “love,” not “like.” I proposed to my wife under the Eiffel Tower and have been visiting regularly since the “80s when the biggest problem the authorities seemed to have was those goddamn punk rockers and their irreverent hairdos. When I heard of the attacks I was stricken with fear: not of terrorists or Muslims but of the weak-kneed FranÃ§ais. There appeared to be no retaliation. Forget hate crimes. There wasn”t even any hate. I bet the jihadists felt the same way. They screamed, “Allahu Akbar” and committed an act of war in the name of Islam. The president agreed with them that it was a war, but the French people seemed overcome with malaise. They were treating it like a train crash. To them it was an unfortunate accident that was totally unpreventable so let’s have a good cry and get on with our lives. France has become so consumed with Ã©galitÃ©, they”ve turned their backs on libertÃ© and fraternitÃ©.

So, I hopped on a plane. When I arrived and started talking to locals, I realized the situation was far worse than I ever could have imagined. Yes, they saw it as a train crash, but it wasn”t a Muslim or even a French train. It was an Israeli train built by Americans. They disagreed with their president and denied it was a war. They even denied the terrorists were Muslims. “They were on drugs,” said a Muslim taxi driver. “That alone proves they were not Muslims.” He went on to explain that the Koran states that all evil deeds must be met with kindness. He said that his religion forbids you to murder the innocent and that these are all traits the Christian Bible is sorely lacking. That’s right, I was getting lectured on the immorality of Christianity days after a Muslim attack. I also met an American tourist who insisted the attackers weren”t human. He said we can”t discuss their behavior because nonhumans have no context. This cognitive dissonance was the norm in Paris.

“Can France take a break from pleading and singing and be irrational just for a day?”

Les banlieues are the concrete suburbs where all the Arabs live. The movie La Haine (“The Hate”) documented the radicals there and all but predicted this war twenty years ago. It’s where the terrorists responsible for the attacks came from. I was too chicken to go there, but I did go to northern Paris where most Muslims live. It’s worth noting that Paris has had assimilated Muslims in it for hundreds of years. They don”t pray five times a day; they avoid cochon, but they”ll catch themselves having the odd glass of wine because “We”re not perfect,” as one man in a kebab shop put it. “The prophet said so.” The kebaber told me the radicals represent a fraction of 1%. Another said it’s one in a million. Studies show the numbers of Muslims sympathetic to radical Islam are at least one in four. At a cafÃ© nearby, some Algerians told me this is all the Jews” fault. I asked why we”ve been having trouble with jihadis since way before Israel existed and they denied it. Late one night I went to the Bataclan, where the most people were killed, and argued with Muslims on the street. They told me Hitler killed people too, ya know. They also asked me how I felt when I heard of the IRA bombings. I told them I don”t like terrorism in any form and one yelled, “We are all human beings!” They asked me what my problem is with Muslims and I pointed to the thousands”yes, thousands”of flowers and candles littering the street below us. “But that’s not Islam!” they shouted. Yeah, tell that to the terrorists.

When I spoke to young people I got the exact same message but with America instead of the Jews. I can”t tell you how many times I heard hipsters say, “I “ate America.” Their reticence was particularly galling because this attack was aimed directly at hipsters. They didn”t go for the west end where all the rich people live. They didn”t go for a tourist spot like Champs-ÃlysÃ©es where they could have made a global impact. They went for what is the equivalent of Williamsburg, Brooklyn. The 10th and 11th arrondissements are where the “bobos” (French hipsters) hang out. As is usually the case with these neighborhoods, it’s a mix between young creative types and recent immigrants. In France’s case, these immigrants are moderate Muslims. ISIS hates this lack of conviction and chose this target as a way to polarize the area. They wanted to incite rage from the hipsters and drive them to Le Pen and they wanted to radicalize the Muslims. It worked on Hollande. He said, “Le France est en guerre” and ran out of the room like Belushi in Animal House. I was with him, however. You want a war? Let’s do it. After 9/11 we had all kinds of Americans sign up to fight. Special Forces soldier Terry Schappert told me he was shocked to see how many Wall Street brokers ended up fighting next to him. Terry himself came out of retirement after 9/11. My cabdriver was right. Christianity is about an eye for an eye. If you hate us, we hate you back. Let’s go into les banlieues and close down all the “illegal” mosques (what the French call unsanctified mosques with self-appointed radical imams). Islam is so inbred and fanatical, they actually think they can win. Let’s show them how wrong they are. France bombed Syria, and the police did begin to storm the suburbs. A Muslim just blew herself up during a raid. The Parisian people I met would blame the police for her death. “Let it be,” as the Beatles say.

I”m not kidding. At one of the memorials, I heard dozens of young people singing “Give Peace a Chance” together. They were also singing Top 40 ballads from the likes of John Legend. They smoked pot and took selfies and provided meaningless gifts to the dead like a Jim Morrison flag with the eyes painted black. Can we have just one hate crime, please? Can one skinhead throw a brick through one window? Can France take a break from pleading and singing and be irrational just for a day?