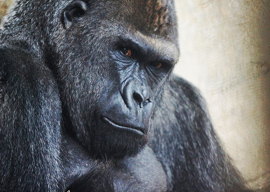 Of all the bans I’ve drawn on Facebook (yes, I’ve been on a bit of a bender about this in recent weeks, so I promise this’ll be the last mention), the oddest one I ever received was last year, after I posted a video of a gibbon playing with a hedgehog. There was no political context…I just thought it was a funny clip. Of everything I’ve ever put on Facebook, that video was by far the most innocuous. Yet it was removed. Facebook claimed I’d violated its policy regarding hate speech. No, I’m not making that up.

As Roseanne Barr found out last week, apes have become “problematic.” A few months ago, social justice lunatics forced the removal of a gorilla statue from a Texas public park because the statue was deemed “racially insensitive” and “a metaphor for the institution of slavery.” After weeks of mockery, city officials agreed to return the statue, but only after it was repainted monochromatic gray, so that it would no longer be black.

And about a month before that exercise in mental retardation, Google banned the words “gorilla,” “chimpanzee,” and “monkey” from its Google Photos algorithm, because apparently the AI couldn’t distinguish between apes and black people (that’s not a joke…read the story here). The AI was grouping photos of black people with labels like “gorillas,” and no matter what Google did, their developers couldn’t teach the AI the difference (again, I’m not joking. Look, here’s the friggin’ story in The Guardian, okay?). Google’s solution? Erase gorillas, chimps, and monkeys from the AI’s knowledge bank. In order to avoid giving further offense to black people, Google created an alternate universe in which certain primates simply don’t exist. Basically, Google lied to its own AI. And now, Google Photos will not allow a pic to be labeled “gorilla,” because its programming rejects the existence of such a creature.

A costume store in New Jersey was recently forced to move its ape masks to a less visible area (within a few years, expect a campaign to have stores remove such masks entirely), and a big-budget animated film was protested for featuring a gorilla character. It’s a wonderful irony that all of this ape redacting is being done by the very same leftists who scream, “You can’t forbid cannabis, man. It’s put on earth by nature. How can something natural be so bad that the government has to keep it from people, man?”

“An insult is not an ideology.”

Apes are becoming in the U.S. what pigs have become in Europe’s Muhammadan districts. There are areas in the U.K. where you can’t have a pig figurine in your window, lest a Muslim glance upon it while passing by. Expect the U.S. left, with its secular religion of “fighting racism,” to increasingly push for ape images to be removed from public view across the country.

At the center of this “ape-artheid” (see what I did there? Where’s my Pulitzer?) is the undisputed fact that black Americans have, over the centuries, been subjected to racist taunts in which apes are invoked. And that sucks. I’m certainly not here to defend that kind of cruel, dehumanizing stupidity. But we live in a time in which the left’s goal is not “overcoming” racism but wallowing in it, obsessing over it, inflating the importance of every offhanded racial remark (except the ones directed at whites) and using “white racism” as a handy excuse for every ill that affects people of color and their communities. As a result, incidents that might have been laughed off in the past are seen as hate crimes today.

Chick Hearn was a sportscasting icon. As the voice of the L.A. Lakers for damn near forty years, he was one of the undisputed legends in his field. During a Lakers/Clippers game in February 1997, Clippers defender Bo Outlaw, who is black (no!), after dunking the ball, hung by one arm from the rim for several seconds, swinging back and forth. Hearn, who is white, in a spur-of-the-moment, off-the-cuff remark, joked that Outlaw was “up there so long he could have eaten a banana.”

And you know what resulted from Hearn’s comment? Nothing. A few black activists tried to whip up some hatred, but Hearn’s friends and colleagues came to his defense. “It was just a stupid little joke, he’s not racist” was the common response. Hearn apologized for any offense his comment might have given, and Lakers star Byron Scott told the media, “People who don’t know him might take offense, but that’s just Chick trying to be funny. Bo did look funny, hanging up there.”

Hell, even the L.A. Times, a paper so prone to racial hysteria it makes Der Stürmer seem color-blind, supported Hearn, with sports columnist Randy Harvey writing, “Here’s hoping a few ill-chosen words after the millions he has spoken don’t tarnish Hearn’s career…. The sooner this episode is in the refrigerator, the better.”

See what happened? A white person made an ape joke about a black person, and people kept their heads. Sanity prevailed. Hearn was not fired, suspended, or even fined. And guess what…the world did not end. Racists did not take the forgiveness afforded to Hearn as their cue to rampage through the city. Blacks were not dragged down Wilshire Boulevard tied to the back of BMWs, and the palm trees lining Rodeo Drive were not blighted by strange fruit.

Everything was fine…everybody was fine.

But that was 1997, before the social media age (and still in the infancy of the cable-news 24-hour cycle. Indeed, Fox News and MSNBC were only a year old at the time). Hell, back then, Democrats were still against illegal immigration (in other words, in leftist parlance, these were the Dark Ages). More recently, in 2003, during a roast of NFL Hall of Famer Emmitt Smith, caustic insult comedian Jeff Ross made a series of “Shaquille O’Neal is an ape” jokes, including “C’mon, I’m not saying Shaq looks like a gorilla, but I saw him trying to peel a microphone.”

Again, a white person made ape jokes about a black person, the black person laughed it off, and the world didn’t go all Turner Diaries in response.

But now, like hypochondriacs, black people have convinced themselves that, in the “age of Trump,” the very sight of an ape can cause them irreparable harm. And, like doctors who think their job is to promote hypochondria, white media elites are egging black folks on, encouraging them to treat every ape incident as an existential crisis, a threat to life, liberty, and self-esteem.

To be sure, Roseanne Barr’s ape dig at Valerie Jarrett was different from Chick Hearn’s jovial offhanded comment and Jeff Ross’ “Hey—it’s a roast, and if you show up you get burned” zingers. Barr absolutely meant to insult Jarrett in a mean-spirited way. Barr insists she was unaware that Jarrett is black. That’s certainly possible, as Jarrett is the very definition of “high yella,” and the fact that she was born in Iran probably leads most people to think she’s Persian. Plus, lots of celebrities, including white ones, have used the Helena Bonham Carter character in Tim Burton’s cinematic guano pile Planet of the Apes as a comedic touchstone. But Barr is being treated like a mass murderer for one tweet that mocked the appearance of a corrupt public figure who frankly shouldn’t have entered politics if she can’t take a cheap shot.