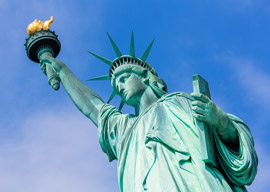 The core of the Trump Phenomenon is the question of freedom of expression.

Donald Trump has come to be seen by both his enemies and his supporters as the living embodiment of a potential revival of the American tradition of free speech after the Obama ice age of political correctness. Trump’s backers tend to believe they have more to gain from frank, outspoken debate (whether in pragmatic advantages or simply in entertainment value), while his opponents assume that they, personally, have more to lose from a return to a freer market for ideas.

This is one of those rare cases in politics where both sides may be right.

For example, back in March, Senator Marco Rubio warned, shortly before losing the Florida primary and dropping out of the race, that this new craze for honesty had America careening toward chaos and anarchy (not to mention poorer career prospects for establishment Republicans):

“This is what a culture and a society looks like when everybody says whatever the heck they want, when everyone just goes around saying “I”m just going to speak my mind,”” Rubio said at a morning press conference in Largo, Fla. “Well, there are other people that are angry, too. And if they speak out and say whatever they want, it all breaks down. It’s called chaos. It’s called anarchy. And that’s what we”re careening towards.”

Rubio had prospered under the old rules of the game that had limited the topics for Republican rhetoric to questions of who liked the corporate income tax least and loved Israel most. But in the unexpected new Trump Era when Republican voters were suddenly allowed to offer their opinions on more fundamental topics such as who should be allowed into America, Rubio withered.

Of course, Rubio didn”t stumble quite as humiliatingly as onetime front-runner Jeb Bush, whose central theme”that he loved Mexicans more than he liked Americans“had been considered electoral genius by the GOP brain trust in 2012″15. Before Trump reminded voters that your candidate really ought to at least claim to be on your side, it was thought clever for Republican candidates to offer American voters an attitude of disdain and a platform of dispossession.

“The fact that Trump is offering a less filtered version of how a typical New York City voter views the universe is probably a good thing.”

One odd thing about all this is that Trump, who prides himself on his salesmanship, had never seemed during his long celebrity career to be a likely candidate for the role of leader of the awkward squad of tellers of inconvenient truths. Even more than most salesmen, Trump has been famous over the last three decades for using generous helpings of what he calls “truthful hyperbole“ to promote his offerings as the greatest things ever. (On the other hand, in contrast to the rather abstract business life of Mitt Romney, Trump’s career of building giant buildings that rappers and pro athletes want to live in is the kind of tangible accomplishment that citizens can identify with.)

Trump’s evident love of making money meant that he wasn”t seen as a threat to the established order, because our system is practiced at controlling dissent through economic squeezing.

The key month in the emergence of the Legend of Trump, however, came immediately following his June 16, 2015, announcement of his candidacy, when business behemoths like NBC, Macy’s, Univision, Carlos Slim, and the golf tours of America and Britain all threatened to break their corporate relationships with Trump for pointing out that Mexican elites are dumping their unwanted population on America.

Normally Americans meekly back down with apologies when confronted with that kind of corporate firepower. But Trump responded that he had 10 billion dollars so he could afford to tell the truth. Granted, Trump probably doesn”t have close to 10 billion dollars, but that only made his political audacity seem even more heroic.

This perspective helps explain much of the otherwise hallucinatory rhetoric about what Trump supposedly believes. We are constantly told by both the mainstream media and by a handful of showboating right-wing extremists that Trump must, deep in his heart, support fascism, anti-Semitism, and the Ku Klux Klan. For example, last weekend The New York Times headlined:

…Mr. Trump’s campaign has engendered impassioned debate about the nature of his appeal and warnings from critics on the left and the right about the potential rise of fascism in the United States. More strident opponents have likened Mr. Trump to Adolf Hitler and Benito Mussolini.

Meanwhile, in the depths of Twitter, a small number of individuals with extravagant haircuts tweet agreement with the Times; only, they assert that it’s not deplorable, it’s awesome that Trump is really a secret Nazi.

But nobody ever seems to come up with any palpable evidence for these accusations/hopes, despite the endless hours of interviews Trump has given the press. As far as I can tell, Trump has commonsensical citizenist views on immigrants (why take less than the best?), while having highly mainstream views on the two most divisive American ethnic groups, blacks and Jews. Thus, Trump is well regarded by the more rough-hewn black and Jewish ethnocentrists, such as Ice Cube of N.W.A and Likudnik Sheldon Adelson.

Why, though, the widespread imputation of crimethink to Trump?