Hand in Hand to Hell: The Black/Jewish “Alliance” 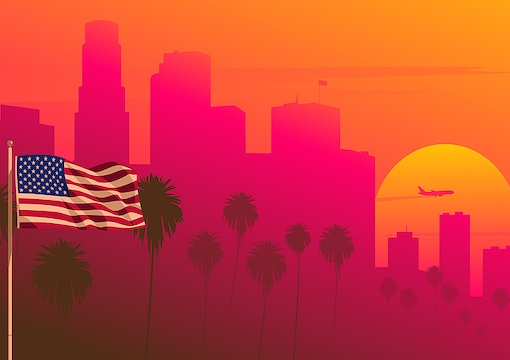 Last week was the anniversary of the siege of Masada. The Jews lost that one, though contemporary scholars spin it as a victory in spirit. Also last week was a more modern-day type of battle: the Great Westside Kosher War. How’d the Jews fare in that one? Let’s take a look.

The war began when the L.A. City Council passed a law mandating that grocery store workers receive a temporary “hero pay” $5-an-hour salary bump for 120 days to compensate them for working during the pandemic. Supermarket mega-corp Kroger balked, and its execs decided to teach L.A. a lesson by closing two of its Ralphs supermarkets (Ralphs is the dominant grocery chain here in SoCal).

The two stores targeted for closure were chosen for a reason. Let’s start with the first one: the “kosher Ralphs” on the border between Beverly Hills and the heavily Orthodox Pico/Robertson district. And yes, it is officially known as the “kosher Ralphs”; it provides the Orthodox with an expanded selection of kashrut fare at low prices. This Ralphs is located two blocks from the Simon Wiesenthal Center Museum of Tolerance, and, like that pseudo-museum, it’s a local institution.

“In the L.A. race war, Soros Jews are losing their berserkers.”

As news of the closure spread, neighborhood Jews took to arms! An online petition to keep the store open garnered over 4,500 signatures in a matter of days. More than that, Jews actually showed up to protest in person (no violence, but much kvetching). All to no avail. I visited the store a few nights ago, and even though the official closing date is May 15, the kosher aisles have already been removed, as if to rub salt in the wound: “For the next month we’ll still be offering bacon and pork chops, but don’t bother coming in here looking for your Jewfood” (Kroger even refused to meet with Orthodox leaders to hear their concerns).

Kroger had been hoping that the threat of closure would compel “the Jews” to use their clout to get the “hero pay” law revoked. That didn’t happen. The Jews in the city’s all-powerful Democrat political machine didn’t budge, regardless of the complaints from the Orthodox.

Well, as Persian-Jewish Beverly Hills and the surrounding Orthodox neighborhoods have gotten redder (as I’ve previously written, those areas went for Trump in 2016 and more so in 2020), the big-money Democrat machine has lost interest in them. High-profile Jewish power brokers now find more in common with upscale white gentile cities like true-blue Manhattan Beach. It’s not an unexpected realignment. For secular Jews, leftism is their religion. They feel more comfortable with suicidal woke whites, who speak the same political language and are much more easily manipulated than “alien” Jews (in nationality or culture) who prefer the Old Testament to Marx and Alinsky.

Some Jews are pro-Jew, others are anti-West. And while there’s plenty of overlap, there are also poles. As we’ve seen in NYC, anti-West Jews are more than happy to toss the Orthodox to the hellstorm of POC crime and anarchy they’ve created in their zeal to destroy Western civ. It’s kinda like Masada, but instead of the Jews saying, “For my principles, I’ll sacrifice myself as a Jew,” they’re saying, “For my principles, I’ll sacrifice you as a Jew.”

One thing those fanatical anti-West Jews realized some time ago is that in the U.S. the “Jew card” pales in power compared with the “black card.” The Holocaust card had a good, long run (especially in Europe), but the black card is the kind of traffic-stopper, the kind of argument-ender, that the Jew card can no longer be. Rich and powerful Jews love using proxies to fight their wars anyway, and that goes for stealthy race wars as much as brick-and-mortar (shell) ones. Civilization-destroying monster George Soros, and those like him in politics, business, academia, and the media, use blacks as their proxies, their fronts. After all, how can you empty prisons and abolish policing if you’re acting in the name of Jews, arguably the least imprisoned, least arrested group in the nation? You can’t disarm whites by claiming they “shoot too many Jews.” You can’t push qualified whites out of the workforce by claiming there are too many unemployed Jews.

No, to accomplish those things, you have to be acting in the name of blacks.

Ah, but there’s the rub. At the beginning of the piece I told you that Kroger chose to close two L.A. Ralphs locations. The first was the “kosher Ralphs.” The second was the “blackityblack Ralphs.” View Park–Windsor Hills is known as the “black Beverly Hills” (that’s the actual nickname). It’s one of the oldest and one of the only remaining black areas in L.A. And that’s where Kroger chose its other politically motivated closure.

Not at all. Kroger execs, trying to pressure the city into revoking the “hero pay” law, targeted two stores that, they assumed, would trigger a response from L.A.’s power elite. After all, what is “L.A. power” if not blacks ’n’ Jews?

Black power in L.A. is circling the drain faster than a 90-year-old in an ICU. As I’ve mentioned in previous columns, L.A.’s arthritic, rapidly vanishing black community can’t even hold a BLM rally without help from white Antifas, and since white Antifas don’t give a damn about some niggardly-ass supermarket, no protests occurred.

Kroger can be excused for thinking it’s still 1980 in L.A.; the company is based in Cincinnati. More surprising—and instructive—is that last week, L.A. Times reporter Greg Braxton made a similar error. Braxton has been the paper’s in-house “black guy” for three decades. I know him; we’ve corresponded occasionally. He’s a hack, but he’s not an idiot. And he’s an L.A. native. On April 9, Braxton wrote about a new TV show that follows a black couple who “journeyed from North Carolina to settle in Compton, which at the time was dominated by whites, a sharp contrast with the city’s predominantly Black population today.”

Braxton, a longtime observer of black L.A., cannot mentally accept his community’s evaporation (both in numbers and clout). He’s in denial, as are the (almost certainly Jewish) editors who didn’t initially catch his blunder. And if Braxton and the Times can be so willfully blind to present demographic realities, obviously Cincinnati-based Kroger can too.

Now, whereas the Persian and Orthodox Jews pissed on by Kroger will be fine—oh, they lost a store? Quel dommage. They’re still in the uppermost economic tier, so they’ll survive this latest Shoah—and whereas the blacks pissed on by Kroger have no future in this city regardless of whether they spend their last few years here buying EBT mac ’n’ cheese at Ralphs or at Habib’s Liquor Mart, the Angelenos most negatively impacted by this demographic shift are the Soros Jews, the ones who banked everything on using blacks as proxies.

That will grow increasingly harder in a city with fewer and fewer blacks.

In the L.A. race war, Soros Jews are losing their berserkers.

Leftist Jews and blacks, mindlessly in alliance against whitey, supported open borders because it just kinda seemed like the right antiwhite thing to do. It was reflexive; it upset whites (“Ah don’t wanna have to speaky no Spanish to order mah cheeseburger, gall-dern it!”), so it must be good!

Okay, so now you’ve got a city full of Mexicans who’ve displaced blacks and, even worse, seem to be really gung ho about law enforcement: The LAPD and the Sheriff’s Department are 50% Latino (the rest are non-Hispanic white, with only a small percentage of blacks).

Soros Jews and their black allies are soiling themselves over the possibility that they imported a people who, for all their faults, might not actually want to “burn it all down” like they do. A people who may not share their obsession with waging war on whitey.

When Tito Toledo the gunslinging niño in Chicago was ventilated by cops last week, whites rioted in Portland and blacks rioted in Oakland. Meanwhile, L.A.’s Mexicans were more concerned about whether any stray bullets damaged nearby buildings. “You have hole in drywall, señor? I feex thee drywall!”

No one knows how Hispanic California will shake out once the blacks are gone. No one. Not you, not me, not Tucker Carlson, not Don Lemon. It’s all conjecture. But I do think that leftist Jews in SoCal are beginning to regret their support and promotion of unfettered immigration, because that knee-jerk mania has replaced a predictable demographic with a wild card. Whether blacks and Jews were always friends is irrelevant. Because no, they were not always friends. Jews have understood from the get-go that among “black leaders” there will always be Jew-haters—the Tony Martins, the Farrakhans. But that was fine, because the “alliance” was not about mutual admiration but mutual hostility toward the white West. Anti-Jewish black demagogues were the price physically nonthreatening leftist Jews were willing to pay for the privilege of aligning with brutish street fighters.

But now that open borders have replaced that demographic with a new one that might be less hateful and possibly more likely to be on the side of the policía than the revolucionarios in a race war, well shit, what’s a Jew to do?

The black-Jew alliance, kind of a sham from the beginning, has imploded in L.A. Ideologically fanatic Jews insisted on an open-borders agenda, and blacks, who…and there’s no kind way to say this…were intellectually outmatched, agreed. So now blacks have made themselves irrelevant, and Jews have imported a new population that might not be as malleable or hateful as the one it replaced.

For Soros Jews, the fact that Hispanics make up 50% (and growing) of L.A. law enforcement is a nightmare. A worst-case scenario.

Jews haven’t quite figured out Mexicans yet, or how to use them (or if they can use them). Hence the feelings of regret. Call it “beaners remorse.” Just like Greg Braxton, the Times editors, and Kroger, leftists—proud “progressives” who love to mock conservatives for pining for the “good old days”—really do wish it were still 1980 around here.

Last week’s column was all about Shakespeare, and I’ll quote the Bard again to close out this week’s piece. As Richard III proclaims before taking on (and falling to) Richmond’s army,

Let us to’t pell-mell
If not to heaven, then hand in hand to hell.

L.A.’s leftist Jews and blacks did indeed march hand in hand to hell. Or at least hand in hand to irrelevance and a future that, while uncertain, is almost assuredly not going to be great for either group.