The Curse of Aaron 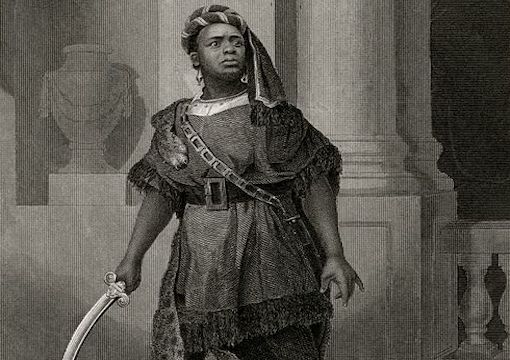 If you ask a casual Shakespeare fan to name the Bard’s most villainous character, odds are the answer will be Richard III. And that’s not a bad response. Richard is indeed a murderous scoundrel. But the thing is, from the very first scene, Richard tells the audience exactly who he is, what he’s planning to do, and why.

There’s no mystery to Richard.

Now, Iago, on the other hand, presents a more complex puzzle. Why does Iago feel the need to destroy Othello? Well, throughout the course of the play, via his interactions with other characters and his soliloquies, Iago offers many possible reasons. Racial animus, professional envy, sexual jealousy. The audience is left with several possible motives to ponder.

But then we come to Aaron, the villainous Moor from Titus Andronicus. And just to save certain Twitter know-it-alls from wasting their time “filling me in” on what I already know, there’s a debate among scholars regarding possible coauthorship of several of Titus’ acts. That, however, is irrelevant to the present discussion.

Whereas Iago is a white guy who torments a black, Aaron is a black guy who torments, well, everyone. He’s the lover and consigliere of Tamora, the Goth queen who marries the Roman Emperor Saturninus. Aaron is firmly in the catbird seat; he has the ear and affection of the empress, who dominates the weak and ineffectual emperor. Aaron’s got power, riches, and babes. And yet…he’s unsatisfied. Material success is not what matters to him. He despises the whites, foes and allies alike, and he’s driven by a compulsion to destroy their society. He arranges brutal rapes, horrific mutilations, and sadistic murders (he even tricks Titus into cutting off his own hand). He foments the unrest that will eventually bring down his own house. Aaron is, in the words of Titus’ brother Marcus, the “chief architect and plotter of these woes.”

Unlike in the case of Richard III, in which the audience is given a clear motive for the character’s villainy, and unlike in the case of Iago, in which the audience is given a choice of possible motives, Shakespeare never offers a glimpse into what makes Aaron tick. No monologue or soliloquy about wrongs done to him in the past or evils perpetrated by whites that made him the monster he is. Aaron is very defensive about his race; he defiantly throws it in the face of other characters. But throughout the course of the play, no one oppresses him because of his race. Indeed, his race does not hinder his estimable success.

You look at Aaron, living the high life—adviser and lover to the empress, a black man basking in luxury among whites…respected, feared, obeyed by those in power, and yet everything he does is geared toward punishing those who elevated him and destabilizing the society that allowed him to achieve influence—and you just want to say to the guy…what the fuck is your problem? You have it so good! Why the need to burn down the system and harm those around you?

My lovely Aaron, wherefore look’st thou sad,
When every thing doth make a gleeful boast?

Vengeance is in my heart, death in my hand,
Blood and revenge are hammering in my head.

But why? Why the anger and hatred? By not answering that question, Shakespeare has inadvertently given us the most relevant 21st-century black character of any playwright in history. A character living in a society in which he is afforded all possible opportunities, while—even as he takes advantage of those opportunities—he harbors nothing but hostility toward the majority population, even if he can point to no specific reason why they deserve such enmity. His very identity is based upon hatred of whites. There’s no tidy origin story, no specific wrong that’s being avenged or injury that served as a catalyst for the rage. There’s just an angry black man who looks gift horses in the mouth and yanks their teeth for pleasure. A black man who finds more satisfaction in being at war than he does from achieving success.

“While Aarons express fury, they also engender it.”

A black man who feels entitled to that war, even if he cannot name a single concrete reason why he should be.

Behold the black New York Times and Washington Post and MSNBC journalists and the black Biden administration officials and the black Hollywood producers and the black athletes and academics who live lives that would make most people green with envy, yet who seem to find fulfillment only in antiwhite, anti-West rage.

Vengeance is in my heart, death in my hand,
Blood and revenge are hammering in my head.

If you could hear the innermost thoughts of someone like the NYT’s Nikole Hannah-Jones, that’s exactly what would be playing on a loop.

Meghan Markle is Aaron in a way that’s almost too on-the-nose. Accepted into a royal house, she proceeded to destroy it from within, in the name of a righteous anger based on nothing more than a belief that she’s racially entitled to be destructive. Presented with a life of luxury and influence, she found greater satisfaction in sowing discord.

Of course, Markle’s an extreme (and, as I said, almost too perfect) example. Plus, in all ways that matter, she’s irrelevant; a bimbo actress–turned–figurehead royal–turned–“famous for being famous” tabloid fodder. The far more pressing matter is that the “Aaron attitude” is fast becoming the norm among everyday American blacks. In last week’s column, I wrote about the process of black radicalization. Aaron is the result of that radicalization.

For the leftist blacks, whites, and Jews who view themselves as shepherds of the black community, Aaron is the ideal, the goal of all the social engineering and propagandizing. Perpetually furious, blindly hateful, vengeful though not for any wrongs actually incurred, unmollified by opportunity or success, and obsessively focused on “tearing it down” while having no idea what to replace “it” with.

An important part of Aaron’s character arc is that he has no exit strategy. Having had no goal beyond destruction, once it becomes clear that his scheming has produced the desired results (the royal house is crumbling, and Titus’ last remaining son Lucius has joined with the Goths to lead an assault on the city), Aaron decides to pick up and leave (a luxury the New York Times Aarons might have, but inner-city Aarons don’t). He grabs his baby, his “son and heir” (the product of his trysts with Tamora), and hits the road.

Unfortunately for him, he’s caught by Lucius and the Goths. Lucius declares that the Moor and his offspring will be killed, a rather understandable response considering that Aaron orchestrated the murder of his brothers, the rape and maiming of his sister, and the dismemberment of his father.

“Save the child,” Aaron implores. In exchange, Aaron offers to reveal all the evils he’s done, every underhanded deed, every plot. “Things that highly may advantage thee to hear.” But only if Lucius swears that the child will be unharmed.

And now we come to my favorite part of the play. Lucius says:

Who should I swear by? Thou believest no god:
That granted, how canst thou believe an oath?

And Aaron essentially replies, indeed, an oath from me is worthless. But I know that you have a belief in morals and ethics. I know that if you give me your word, you’ll keep it,

For I know thou art religious
And hast a thing within thee called conscience.

Aaron despises white society. But he understands that these people he’s waged war against have a thing inside them that can be manipulated, an adherence to a set of values and beliefs. A conscience. Aaron knows how to use this weakness against them; their sense of morality, their allegiance to the rule of law. Their “do-gooder” mindset.

Lucius swears by his God that the child shall not be harmed, and Aaron proceeds to deliver a monologue that doesn’t even remotely “advantage” Lucius, but merely torments the man with vivid details of his sister’s rape and brothers’ murder (and if you want to see that monologue done to absolute perfection, watch Harry Lennix from 1999’s Titus).

Again, we see the similarity to today’s Aarons. Radicalized blacks claim to hate “the system,” yet deep down they understand that the system will treat them fairly. If they commit a serious crime, they know that a hundred “whites with a conscience” will see to it that they get a fair trial, sympathetic media coverage, and the most lenient possible sentence. The present-day Aarons mock white society for this adherence to law and ethics, but they use it, they rely on it, daily.

This is why black radicals have made the dismantling of police such a top priority. A black criminal’s moment of arrest is the only point in the process where there exists a small risk of harm. Once a black suspect enters the system, between the gullible whites who have within them that thing called conscience, and the conscienceless shysters who not only love defending Aarons but creating them, he knows he’ll be treated justly and with compassion.

In the play, things do not conclude well for Aaron. In the final scene, Lucius, the new emperor, orders him buried to his neck to die a slow death from hunger and dehydration (though Lucius keeps his word about not harming the child).

Cold-blooded to the end, as he’s being buried alive, Aaron utters what are likely the most hard-boiled lines the Bard ever penned:

O, why should wrath be mute, and fury dumb?
I am no baby, I, that with base prayers
I should repent the evils I have done:
If one good deed in all my life I did,
I do repent it from my very soul.

Here we get one final glimpse into Aaron’s psyche. “Why should wrath be mute and fury dumb?” Aaron, filled with wrath and fury (for whatever, or for no, reason), saw his acts of violence as “expression.” He was simply “being heard.” It’s not about the lives he destroyed, but about his “right” to give voice to his anger.

Still, in the final act, he’s as doomed as those he victimized.

Because while Aarons express fury, they also engender it. Aarons make no friends and many enemies. It’s a risky road for a stagnant demographic surrounded by a growing demographic of people who don’t exactly share Lucius’ “thing called conscience,” especially when it comes to blacks.

Black Americans should be wary of their own leaders, and the leaders of certain other communities, who encourage the Aaron path. As fun as it is to watch the character, and, I’m sure, to play the character, in the end, he meets a very bad fate. Dying in misery, mourned by none.

To be, or not to be, Aaron. That is the question facing black America in 2021.