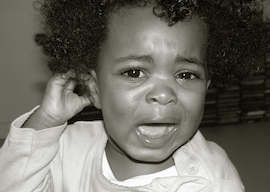 In Box v. Planned Parenthood, Justice Ginsburg quips that one of Justice Thomas’ footnotes to his opinion “displays more heat than light.” The description is equally true of Thomas’ opinion itself. For, concerned that abortion not become “a tool of modern-day eugenics,” Thomas strangely provides a history of eugenics, as if there were any reason to believe that current abortion laws and practices in this country merit comparison to it. In the future, Thomas seems to think, abortion might become eugenic in character. Current abortion law in Indiana, he writes,

makes it illegal for an abortion provider to perform an abortion in Indiana when the provider knows that the mother is seeking the abortion solely because of the child’s race, sex, diagnosis of Down syndrome, disability, or related characteristics…. Each of the immutable characteristics protected by this law can be known relatively early in a pregnancy, and the law prevents them from becoming the sole criterion for deciding whether the child will live or die. Put differently, this law [i.e., that signed into law by Governor Mike Pence in 2016] and other laws like it promote a State’s compelling interest in preventing abortion from becoming a tool of modern-day eugenics.

The use of abortion to achieve eugenic goals is not merely hypothetical. The foundations for legalizing abortion in America were laid during the early 20th-century birth-control movement. That movement developed alongside the American eugenics movement. And significantly, Planned Parenthood founder Margaret Sanger recognized the eugenic potential of her cause.

Merriam-Webster’s dictionary defines eugenics as “the practice or advocacy of controlled selective breeding of human populations (as by sterilization) to improve the population’s genetic composition.” Eugenics historically describes reproductive controls imposed on other people by paternalistic powers that be. And pace Thomas, it’s inaccurate to equate or liken eugenics, as historically understood and advocated, to a “mother who is seeking…[an] abortion solely because of the child’s race, sex, diagnosis of Down syndrome, disability, or related characteristics.” For here there is no powerful, paternalistic group advocating that members of certain groups be aborted because of their allegedly inferior or undesirable characteristics, let alone “to improve the population’s genetic composition.” In Indiana, as throughout America, there are individual women who get abortions for any number of reasons, but none of these are eugenic.

“[A]bortion is an act rife with the potential for eugenic manipulation,” says Thomas, and “from the beginning, birth control and abortion were promoted as a means of effectuating eugenics.” Very true—but none of this means that performing an “abortion solely because of the child’s race, sex, diagnosis of Down syndrome, disability, or related characteristics” would be eugenic.

Nor is there any reason, in contemporary America, to believe eugenics is likely to become legal. Indeed, Americans have such sentimental faith in what they call equality—a confused artifact of Christianity, and which should not be confounded with justice—that getting eugenics on the table is about as likely as repealing the Nineteenth Amendment.

“If a baby is not consistent with one’s intentions, desires, expectations, and so forth, may one abort it?”

“[A]bortion in the United States is…marked by a considerable racial disparity,” Thomas observes. And he goes on:

What Thomas doesn’t tell us is that black women have more abortions because they have higher pregnancy rates, and earlier and more unprotected sex. Furthermore, their marriage rates are low, and therefore their pregnancies and births are burdensome and more often occur in poverty. This is an awful situation, but it has nothing to do with eugenics, because nobody is making black women do what they do.

Still, we may be grateful for the passage, as it’s just the sort of thing that leads David French and other neocons to twaddle about the “racist nature” of abortion—always a droll spectacle: “Get off the Democrat slave plantation! You have rights, and you are my equal, but you’ve been duped for too long!”

Nearly all pregnancies are preventable: Either don’t have sex or use contraception (which prevents nearly all pregnancies). In choosing to have sex, women know, whether or not a baby is intended or wanted, that pregnancy may result, and as such, they’re responsible for the consequences of their actions. This scenario comprehends most pregnancies, which are consistent with what I called the autonomy principle in last week’s column.

Yet the abortion question is far more difficult than simply determining whether a pregnancy is consistent with the autonomy principle, and the primary value of Thomas’ opinion is that it serves to highlight this terrible truth. “In Iceland,” Thomas notes, “the abortion rate for children diagnosed with Down syndrome in utero approaches 100%…. Other European countries have similarly high rates, and the rate in the United States is approximately two-thirds.” Again, since such abortions result from the decisions of individual women, they shouldn’t be confounded with eugenics. But there are, nevertheless, deep problems here, moral, legal, and philosophical.

A baby is a result of a genetic roll of dice. The many couples, and single women, who use the eggs and semen of healthy, educated, and high-IQ persons to produce babies they cannot conceive themselves, never know for sure that they won’t end up with a baby who has Down syndrome (or whatever commonly undesirable characteristic), although it’s certainly possible to know that such an outcome is highly unlikely. There is no case for making a woman have a baby who was conceived by rape, because unlike nearly all pregnancies, such a pregnancy is not reducible to the woman’s own choices. To maintain otherwise contradicts natural law, and makes women objects of the state’s subjection, even though women and men alike are governed only by virtue of their consent. But suppose a couple conceives a baby and, using sophisticated modern technology, learns at some point in the pregnancy that he or she has Down syndrome. For them, to raise that baby would be an enormous burden, much greater than that which they’d anticipated, and so one that they don’t want to assume. Would they be justified, then, in having it aborted?

No, some will say, reasoning that being an enormous burden on other people does not constitute sufficient grounds for terminating human life. This seems to me a pretty strong objection. But is it sufficiently strong that the state—that is, other people—is justified in making citizens answerable to it? To be sure, nobody, in conceiving a baby, intends to conceive one with Down syndrome, so if a baby is not consistent with one’s intentions, desires, expectations, and so forth, may one abort it? After all, though they surely know that raising any child is never a wholly positive experience, it’s generally positive criteria that motivate a couple to reproduce. Is it true, nevertheless, that chosen conception entails an absolute obligation (and concomitant labor and care) to a baby, irrespective of its nature?

Do we have incontrovertibly objective justificatory criteria here? Or is this case so difficult that it’s best for people to work it out for themselves?

Whatever one thinks about all this, with respect to the evaluative process (as it happens in people’s self-interested minds), we shouldn’t underestimate the weight of raising a child with Down syndrome, a condition that, for many people, justifies abortion, at least in practice, if not morally. The figures Thomas cites, whatever one thinks of them, are representative of how many people have judged the value of babies with Down syndrome, relative to the labor and care necessary to raise them. And though people, in their abstracting minds, are quick to affirm what they believe to be universal truths, in actual practice their behavior tends to be conveniently flexible.

To be clear, I haven’t been arguing for a position on the issue of unwanted babies myself, but trying to outline it and how people think about it.

Significantly limiting abortion by no means entails solutions to the practical problems that would result from doing so. For instance, according to the Centers for Disease Control and Prevention, between 1970 and 2015, there were 45.7 million legal induced abortions. It is largely poor women who get abortions, and a disproportionate number of those women are black. Of those 45.7 million aborted babies, many would have had children of their own by now, had they lived. Many believers think that the solution to abortion is adoption, but the data on adoption, both national and international, suggest that adoption is no more than a partial solution.

Assuming for argument’s sake that henceforth there would be vastly fewer abortions, who would support and care for all these babies? Seventy percent of black children are born out of wedlock. Would limiting abortion, or making it illegal altogether, significantly change that? Would rolling back the welfare state? Believers can assert “the sanctity of life” all they wish; doing so tells us nothing about how to deal with these formidable problems.

Influenced by liberalism and sentimentalized religion, with their delusions enabled by material wealth, many people today assume that every moral and social evil, if we just do the right thing, can have a good outcome. Therefore, they impose their biased perspective (as opposed to an unflinchingly disinterested one) on the very perception of hard problems, so that the subsequent evaluation and reasoning suit their comforting prejudices. Behind all this is the fear of death and of the harshness of life generally. Meanwhile, in reality, there are situations where only bad or indeed tragic outcomes are possible. “Wisdom is learning what to overlook,” said William James. And yet sometimes overlooking things only makes them worse.