Has Pot Become a Hard Drug? 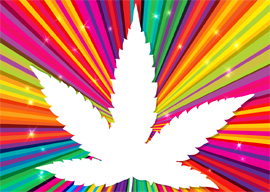 More than half the country says they think pot should be legalized. This is due in part to a brilliant PR campaign that frames cannabis as a valuable medicinal herb instead of a party drug. “[T]he medical marijuana movement has refurbished cannabis’s image,” says a recent cover story in Fortune, “properly reorienting connotations away from intoxication and irresponsibility and toward wellness and spirituality.”

However, a funny thing happened on the way to the courthouse. As the talk of decriminalization became more mainstream, the drug itself became more hardcore. The cannabis they”re talking about legalizing today feels more like magic mushrooms than the joints people were smoking when the discussion began.

A Slate article from last month entitled “Not That High: Today’s Marijuana is Too Strong, and That’s Bad for New Business“ claims the technology has become so advanced, THC levels are now running at 25%.

I quit smoking weed because when you have kids, you need to be on call in case someone has a nightmare. You can”t tell your daughter monsters don”t exist when you”re starting to think that maybe they do.

I spoke to some young pot-smokers, and they all agree things have gotten out of hand. An intern named Dan told me he has to dilute his joints with 75% tobacco. Another said that she had to give up joints and that even one small puff of a one hitter can be too intense.

That’s all fine and dandy, but to really understand how intense marijuana has become I can”t merely harass kids all day. I need to try it. So I had a friend of a friend hook me up with a very strong strain called “Master Kush,” and I”m going to smoke it right now.

(The remainder of this article was written”and published unedited”after half a toke of today’s weed.)

A half hour has gone by and this is what happened. First of all. It’s very hard to type. I don”t think I could write with a pen. I had a big rip off a bong (I sound like a narc) and had a huge coughing fit that got so intense I honestly thought about calling 911. It was totally involuntary and it kept going on and on and on. People were laughing at first but then I could see them get concerned and that got me concerned. It was one of those coughs where you start thinking you”re going to barf but you never quite barf. Man, just thinking about it makes me want to barf.

I felt like I was going to throw up or maybe just have diarrhea so I went to the bathroom but nothing happened. I was still coughing at that point. The guy in the stall next to me must have thought I had the plague. I was acting like a guy in one of those virus outbreak movies where you see the first few people dying.

So, I come back to the couch and then things get really bad. I was panting and having a slow tortuous panic attack that made both my hands go numb with pins and needles. I took my shirt off and lay on the cold floor to cool down but then my feet went numb too. It was hell. And it kept getting worse. I was writhing around on the floor trying to find a position that didn”t feel like the world was going to end. The room was spinning and every time I opened my eyes, it felt like I was looking through someone else’s glasses. My friend said, “I”ve never seen pot do that to anyone before” and I could sort of laugh but it was hard work. I vascialted [sic] from panting panic attacks on the couch to lying on the floor to cool down. I started thinking about calling 911 again but the thought of being in a loud ambulance seemed too scary.