Has the Time Come for Jon Stewart to Run for Office? 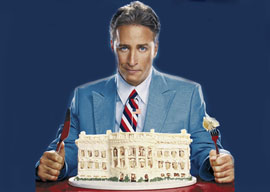 Two large-scale rallies held the past few months in Washington, D.C., present an interesting contrast. Glenn Beck, an entertainer who poses as a political pundit, held a rally to “Restore Honor” in late August. Jon Stewart, a political pundit disguised as an entertainer, held a rally to “Restore Sanity” on October 30. Beck, who doesn”t shy away from theatrics, used his rally to restore his base’s honor and motivate them politically. Stewart, the entertainer, swung and missed at an opportunity to mobilize his followers toward a saner America”if only he hadn”t shied away from his politics.

Jon Stewart made the transition from a failed actor to a moderately successful stand-up comic to one of America’s most charismatic and influential figures. He’s a multimedia phenom who publishes best-selling books, appears on TV, has a multinational corporation hosting his interactive website, goes on speaking tours across the country, and hosted a weekend barbeque for hundreds of thousands of friends on the Capitol building’s front lawn.

According to one estimate, nearly 300,000 people showed up for Stewart’s event. It was poignant at times, had some nice sentiments, good musical guests, and yes, “The light at the end of the tunnel is just New Jersey” joke was very funny. But Stewart’s rally let down those who traveled, some across the country with money they didn”t have, to watch the progressive left’s de facto leader hosting what was essentially a variety show.

Jon”can I call you “Jon”?”here’s the thing: I was at the rally, and I want to let you in on a few important nuggets you seemed to overlook.

“Stewart, the entertainer, swung and missed at an opportunity to mobilize his followers toward a saner America”if only he hadn”t shied away from his politics.”

You are, whether you like it or not, a star of the free entertainment that is modern American politics. That army of progressives didn”t turn up for a song-and-dance number; they came to see you, this generation’s Edward R. Murrow, speak the truth about the state of our nation. Every night, they tune in to watch you make the country a saner place, and they want to know what they can do to help. They showed up because they thought you might have some answers. You didn”t. You didn”t even ask any questions. You didn”t even remind people to vote.

You see, Jon, liberals are desperate for someone with some balls to stand up and tell it like it is, what needs to be done, and how they need to do it. Democrats lost the House because no liberal politician is out there saying, “Yes, I am for this party”the one that is for progress, for keeping the globe healthy, for embracing inevitable change, and for accepting people from all walks of life because we are all immigrants in this country. We must provide people with safety nets because sometimes shit happens no matter how hard you try. We love our country, and we love capitalism. We are here to help, and we will fight for our beliefs or die trying.”