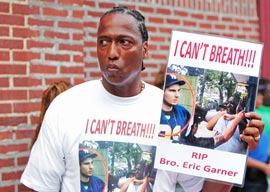 Had Freddie Gray been robbed, beaten and left to die in the streets of his Baltimore neighborhood, no one would be mourning him today.

No one would care, three weeks later, but his family and friends.

It was the manner of his death, suffering a fractured spine in police custody, that makes Freddie matter. For he can now be credibly cast in the victim’s role in the great new narrative against America—that ours is a society of unequal justice where racist cops routinely brutalize black men and boys and are rarely called to account.

In this narrative, the liberal is always the hero.

Hillary Clinton knows the narrative by heart and has rushed forward to cast herself as the champion of black America.

As The Washington Times reports, Hillary declared Wednesday she would help to end a “pattern” of cops killing black men.

“There is something wrong when a third of all black men face the prospect of prison during their lifetimes. And an estimated 1.5 million black men are ‘missing’ from their families and communities because of incarceration and premature death. …

“My heart breaks for these young men and their families. We have to come to terms with some hard truths about race and justice in America.”

We certainly do, Hillary.

“Hillary Clinton knows the narrative by heart and has rushed forward to cast herself as the champion of black America.”

But Trayvon died when he was shot sitting on top of and beating senseless a neighborhood watch guy, “martial arts style,” and banging his head on the sidewalk as he screamed for help.

Michael Brown died of gunshot wounds when, after knocking over a convenience store and throttling the clerk in Ferguson, Missouri, he tried to wrestle a gun from a cop, and, told to halt, charged the officer.

This latest great narrative against America—that the men in blue are a threat to us all, especially black America, rather than the last line of society’s defense from its criminal class—is but another big lie, rooted in a tiny truth.

Yes, some black men and boys are killed every year in clashes with cops. And, yes, blacks are incarcerated in far greater proportions and suffer, on average, more early deaths. But who is killing them?

As for incarcerations, every imprisoned male has confessed to or been convicted of a crime. And many of the drug charges for which blacks are in prison were a result of their being allowed to plea bargain to a lesser offence.

Freddie Gray had a rap sheet of a dozen arrests.

In pursuit of equality of result there began one of the most massive transfers of wealth in all history. Trillions of tax dollars were plunged into programs of social uplift. The results in black America?

Where the illegitimacy rate was 23 percent in 1965, it is 72 percent now, and the gap between black and white test scores endures. In the black community, the dropout rate, crime rate, drug use rate and incarceration rate are now far higher now than in 1965.

And one notices something else in America. The lawns are being mowed, potholes filled, ditches dug, fast-food served, dishes washed and buildings cleaned increasingly by folks who are newcomers. It is they who are, in Jesse Jackson’s phrase, “movin’ on up.”

Looking back to when LBJ’s Great Society was launched, and the moral, social and cultural revolution of the 1960s began, what has liberal ideology done for black America?