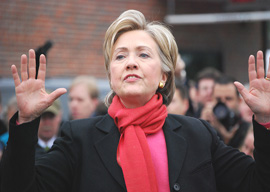 As demonstrated by a weekend of immigrant Muslim terrorism in Minnesota, New York, and New Jersey, Mrs. Clinton has left herself a hostage to fortune. While still the overdog in the campaign, her repeatedly passing up opportunities to pivot away from the Establishment’s extremist conventional wisdom on border security, Donald Trump’s best issue, has left her at the mercy of events.

Trump is not a deep reader, but he has watched a whole lot of television news over the decades and appears to have a pretty accurate sense of the rhythm of events, of how often bad things are likely to happen. He has positioned himself on the issues to benefit from incidents like this weekend’s that, while they can”t be predicted exactly, can be foreseen statistically. With 48 days left until the election, that’s plenty of time for various more bad news that will hurt Hillary.

Meanwhile, Trump has triangulated in Hillary’s direction on her women’s issues like maternity leave, while nimbly staying strong on his core issue of borders. Trump understands not just Will Rogers” Law of Holes, but also its counterpart: If you find yourself in a goldmine, don”t stop digging.

Hillary, though, has been stuck in a rut on borders, and just keeps digging.

Why is open borders looking more and more like the ditch she’s choosing to die in?

First, though, note that as the quasi-incumbent, Hillary is vulnerable to a number of different kinds of potential incidents, only some of which she and her allies have much control over.

“America now has a more-than-adequate supply of angry young Muslims. And the more the terrorier. “

There are the usual risks over foreign or economic crises, such as the Sept. 15, 2008, financial crash that sank the McCain-Palin ticket. (It is now forgotten, but McCain had been narrowly ahead in the polls during the first two weeks of September.) Obama’s Fed appointee Janet Yellen, however, is unlikely to make Ben Bernanke’s mistake and allow interest rates to rise before the election.

Hillary and her friends also appear to have some control over the level of violence leftists unleash against Trump supporters. Last winter the mainstream media played up the meme of “violence at Trump rallies.” But in an age of cell-phone videos, it soon became evident that the vast majority of criminality was anti-Trump. Attacks by Mexican-flag-waving thugs in California on white women peacefully assembling to hear their candidate speak looked exceptionally bad.

By the time of the Republican convention, though, the Democrats appeared to have gotten the message out to their shock workers to ixnay on punching Trump supporters and smashing their cars, because chaos was turning into a vote-loser.

On the other hand, the media have been so berserk with anti-Trump rage lately that all the hate propaganda might stimulate another lone-nut-with-a-gun to try to save the world from Trump, the way that Hillary’s allies in Black Lives Matter helped get all those cops shot in July.

The ineffectual assassination attempt on Trump back in June has been stuffed down the media memory hole. Hillary’s partisans, other than some black ex-soldiers like the Dallas shooter, tend to be inept with guns and bombs.

But Hillary ought to worry about a worst-case scenario: a press-inspired shooting or bombing that leaves Trump wounded but triumphantly alive.

Still, Hillary can hardly ask her network allies to tone down their hate, because without the respectable press venting vitriol against Trump 24/7, where would she be? She”ll just have to take the risk that one of her supporters won”t wing Trump.

More Blacks Lives Matter supporters murdering cops would be another vote-loser for Hillary. Two more mass shootings like Dallas and Baton Rouge would be bad for her candidacy. On the other hand, the national media can bury single incidents of BLM-inspired killings as long as they transpire quickly. Cops get shot all the time, so who knows what inspired the shooters?

The nightmare scenario for Hillary is another drawn-out firefight like the one in Dallas that riveted the nation to their televisions.

Black riots, like the one in Milwaukee last month following a black cop shooting a black criminal, aren”t good for Hillary either. But the long hot summer of 2016 is finally cooling off as autumn begins. The BLM leadership and the media presumably have been notified to go easy on the outrage over any incidents of cops shooting blacks, like the latest in Tulsa, until after the election.

Still, the kind of blacks who might riot don”t read The New York Times and think the BLM top leadership are a bunch of careerist weirdos playing at being black. Thus, stoking black rage isn”t something that can necessarily be shut down when it’s tactically inconvenient for the Democrats.

The BLM-inspired spike in the homicide rate isn”t beneficial for Hillary either. The liberal Brennan Center for Justice at NYU has a new study out looking at the 30 biggest cities. The Wall Street Journal summarizes:

But the good news from Hillary’s perspective is that it’s mostly black criminals being shot by black criminals following anti-police protests. So she can probably safely assume the press can obfuscate it a while longer, with claims such as that it’s happening primarily in Chicago. After all, what responsibility do Democrats bear for governing Chicago?

And besides, only 38 people were shot in Chicago this weekend. Maybe climate change will bring an early November blizzard to Chicago and slow down the slaughter?

The bigger risks for Hillary, however, involve border security, a complex of issues upon which she has refused to give ground despite Trump’s demonstration that borders matter to voters.

A notable long-term threat to the United States would be a rush by migrants to overwhelm the southern border, such as the flash-mob assault Europe endured in September 2015. We had a preview of that in the summer of 2014 when the Obama administration invited Central American juveniles to overwhelm the frontier.