How Trump Can Use Racial Resentment to Get Reelected 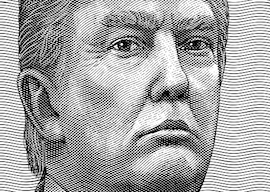 On Monday, in a rich discussion with Amy Wax, Glenn Loury said blacks “have to establish through their actual performance” that they are “up to snuff.” Affirmative action is profoundly corrupting, the refreshingly honest host of The Glenn Show observed, because lowering the bar for blacks means they don’t have to meet objective standards of competence that are necessary independent of one’s race. In consequence, blacks not only need not develop or demonstrate sufficient merit; society as a whole suffers, people who aren’t necessarily qualified, or anyway, less qualified than others, getting into schools and getting jobs simply because they are the right (underperforming) race.

A right-leaning black economist at Brown University, Loury may enjoy a bit more freedom to be politically incorrect than ordinary Americans, although he too has been criticized over the years for noticing things. Certainly, anyway, Loury is right. A distinguished academic doctor told me recently that, while nobody in medicine, for obvious reasons, wants to be known for doubting the competence of minority doctors, some of whom get into medical school because of affirmative action, there are nevertheless many doctors who perceive the relative underperformance of minority doctors in medical school and in medicine generally. Similar stories are often heard these days among lawyers, although they too are anxious to protect themselves from accusations of “racism.” It is not unusual for a minority to get into a prestigious law school for which he or she is not qualified. Of course, there’s little skin in the game in diversity-crazed academia, but the racial advantage ends for many an affirmative action recipient once, a few years later, the white-shoe law firm decides that the young lawyer doesn’t “produce” as well as the other junior sharks. For all that, affirmative action will be here to stay if the Supreme Court continues to rule that universities have the discretion to consider racial diversity in admitting new students.

Nevertheless, holding blacks accountable, and not making excuses for them, remains an important cultural value, especially for the right, where it may be effective politically. In the 1960s, high black crime rates and race riots led to white flight, and the GOP turned into the party of law and order. In the 1990s, being tough on crime was a winning issue for New York City mayor Rudolph Giuliani. Bill Clinton had to show he was tough on crime to get elected president, and he instituted harsher penalties once in office, at the request of black pastors. And yet, amid the decay of Christianity and of liberalism’s inexorable decadent advance, many of those who supported Clinton and his policies are now unquestioning supporters of Black Lives Matter and enthusiastically embrace an attitude of racial self-hatred.

“Whenever Trump says something that is crude but true, it goes over very well with his white voting base.”

So, there is greater racial division in the culture today. Now President Trump, if he wants to get reelected in 2020, should use this to his advantage. “If black people kill black people every day, why not have a week and kill white people?” asked the rapper Sister Souljah in 1992. In a shrewd move, Bill Clinton used an appearance before Jesse Jackson’s Rainbow People’s Coalition to criticize Souljah, comparing her controversial comments to remarks by former Ku Klux Klansman David Duke. After his speech, Clinton said he criticized Souljah because “she has a big influence on a lot of people.” Thus Clinton emerged from the incident looking rather impressive. By contrast, President Trump’s recent tweets about the rapper A$AP Rocky made Trump appear ridiculous. “Very disappointed in Prime Minister Stefan Löfven for being unable to act,” Trump tweeted on July 25. “Sweden has let our African American Community down in the United States. I watched the tapes of A$AP Rocky, and he was being followed and harassed by troublemakers. Treat Americans fairly! #FreeRocky.” Rocky and “his crew,” you see, had fought with some other knuckleheads, that is, Afghan immigrants, on the streets of Stockholm. Rocky and two friends were convicted of assault, but having been freed from jail earlier this month pending the verdict, they will not have to serve more time or pay any fines. What makes the matter so ridiculous is that President Trump took the trouble to intervene on Rocky A$AP’s behalf after Kanye West had urged him to do so. The assumption that A$AP Rocky is synonymous with the “African American Community” indicates a desire to pander to blacks. Yet why bother? Conservative candidates, after all, never get more than a trivial percentage of the black vote. Besides, no matter what Trump does, the left is going to hate him and call him a racist, and indeed, that was precisely its reaction to Trump’s efforts to help A$AP Rocky.

Instead of vainly trying to win over blacks, Trump should use white resentment toward black crime to solidify his white voting base. To this end, he must resist the cheap partisan habit of blaming black misbehavior and cultural dysfunction on Democrat policies. Trump should go after those policies, to be sure, but he shouldn’t stop there. In his recent spat with Rep. Elijah E. Cummings (D-Md.), Trump sounded as trite and generic as Ben Shapiro or Dinesh D’Souza. Needless to say, most Democrat policies are bad in themselves, and the president was quite right to take Cummings to task. Still, such policies don’t explain why other racial groups, living under the same policies, have lower incidences of violence and of cultural dysfunction than blacks. Whether the liberal city is Baltimore, New York, or Portland, Oregon, Asians and Jews have very low incidences of violence and of cultural dysfunction, while blacks abound in each. The problem, then, is black culture, and the family in particular. Like Glenn Loury, Trump should take a no-nonsense approach to this issue. Black-on-white crime is a grave national problem, and just as Trump has received abundant support from whites by appealing to their anger regarding excessive immigration, so he may get support from them by calling for nationwide broken windows policing, emphasizing that it’s vital to protect whites from black crime.

For many blacks and liberals, broken windows policing entails “racism.” No matter. Trump should say frankly that he won’t be manipulated by groundless moralistic accusations—a principled stand that his white voting base would appreciate. Blacks will be held accountable, and that’s that. This strategy may seem extreme, but as a rule, whenever Trump says something that is crude but true—for example, that Ilhan Omar and the rest, if they’re going to be mere ingrates, should return to their backward countries—it goes over very well with his white voting base. Indeed, whites are understandably sick and tired of being scapegoats, and for black problems in particular, so by fomenting racial division among whites and blacks, Trump may get more support from the former, who are the only group out of the two that he should be concerned about in an electoral sense.

A strong law-and-order campaign may also allow Trump to distinguish himself from the Democrat candidates. Prison reform is a popular issue among them, but there are two questions that Democrat politicians never ask: Why should ordinary, law-abiding citizens have to live in a less safe society just because Democrat politicians, in order to get minority votes, favor lenient sentences? And, who is it that is most harmed by prison reform? Minority communities themselves, for the inevitable result of prison reform is more criminal characters on the streets. Trump might also note, assuming he looks into the matter, that despite popular misunderstanding, most people in prison are not there because of a petty drug crime, but because they have a history of violence and repeated criminal offenses. In short, ours is an unusually unlawful country, and there are many people who should not be out on the streets.

It is certain that Trump needs to find some way to win over his white voting base. For he has turned out to be a standard Republican president, and to get a second term, he has to do more than remind us that he isn’t Hillary. True, the economy is much improved, but the principal beneficiaries are the middle and upper classes, not the working class. On immigration—which is in part a labor issue—Trump has been lousy. We don’t need more immigrants, and “merit-based immigration” does nothing to preserve what America was meant to be—namely, an Anglo-European nation—but rather increases the likelihood of a future Democratic one-party state. Trump has had an awful Congress to work with, of course, but he hasn’t given it much of a fight, either, and the dreadful Jared Kushner never should have been involved with the crucial issue. In the Middle East, American foreign policy largely serves Israeli and, to a lesser extent, Saudi interests. Like any Republican president, Trump can count on heavy support from vulgar Chamber of Commerce types, but by trying to force “regime change” in Venezuela, whose citizens he’s cruelly sanctioned, the president has surely lost some of his more serious supporters. We wanted an anti-interventionist administration, and though it was always known that Trump was an Israel partisan, he has still proved to be a disappointment.

Finally, Trump has called for more red-flag gun laws, and if these are passed, he will probably lose even more support from his white voting base. Trump also has said that he is “directing the Department of Justice to work in partnership with local, state, and federal agencies and social media companies to develop tools to identify mass shooters before they strike.” Exactly what such monitoring will entail is unclear, but it doesn’t seem to be a good sign for those who value free expression, and doubtless that for some in Big Tech, to be a Trump supporter is in itself a suspicious thing.