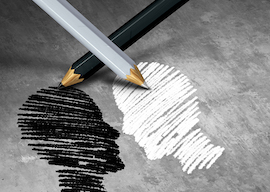 Man is an animal who gets lost in his own ideas, rosy abstractions obscuring the hard realities he’d do better to behold. Consider multiculturalism, that mad fantasy. Different groups, we are to believe, can all flourish together provided they work hard, follow the law, be good neighbors, and so forth. In actual practice, multiculturalism is a huge liability, and in our country today it is white liberals who most demonstrate this.

The organization GenForward, of the University of Chicago, recently surveyed a number of people from ages 18 to 34. Of the four ethnic groups—whites, blacks, Hispanics, and Asians—whites had the lowest in-group bias. Asked their opinion about whites becoming a minority, projected to happen in about thirty years, 57 percent of white liberals said that that would be a strength for the country.

The American National Election Studies data, which include voters of all ages, show that of the four major ethnic groups, and three political categories (liberals, moderates, and conservatives), only white liberals lack a significant in-group bias. Blacks have the highest in-group bias, independent of political affiliation.

Commenting on the data at American Greatness, Jeremy Carl describes the white liberal problem as

ethnic sado-narcissism, a demonstration of self-love that perversely manifests itself as a desire to denigrate and punish the broader ethnic group to which one belongs. We saw it with [Jussie] Smollett…[and] we saw it with the Covington high-school boys in their MAGA hats.

By “sado-narcissism,” a very interesting notion, Carl seems to mean what is often called virtue signaling combined with “a desire to denigrate and punish” your ethnic group. Vanity is served, and advertised to others, by demonstrating awareness that your group is the bad guys. How else, after all, can you keep up with the intersectional royalty, whose superior victimization entitles them to superior social standing and other goodies (hiring preferences, awards, grants, and on and on)?

[W]hite liberals are suffering from a particularly pernicious form of self-hatred.

If self-hatred is the explanation, it would explain why so many white liberals celebrate the prospect of their ethnic group ceasing to be a majority by the middle of this century.

“It is the irrational character of human nature that makes ‘social justice’ so very dangerous.”

There surely are many self-hating white liberals, and such hatred does (partially) explain why white liberals disproportionately think that whites becoming a minority would be a strength for America. I suspect, though, that in his contempt for self-defeating white liberals, Carl was motivated to have a simplistic understanding of a complex subject. Indeed, his underlying bias and lack of nuance are suggested by the strange word “celebrate,” which is not justified by the data he cites or the events he references.

Liberalism derives from Protestant Christianity, and like much of Christianity itself, a relative lack of in-group bias may represent a greater sense of impartiality and fairness, a desire to do what you believe is right, irrespective of what serves your interests and those of your group. A white liberal who thinks it would be good to become a minority group may do so because he thinks “diversity is our strength,” or should be. To be sure, none of these possibilities excludes self-hatred as an explanatory factor. There is no reason they cannot all be true.

It is only too easy to assign the worst of motives and beliefs to those who disagree with us. In reality, moral psychology is nothing if not complicated. In some cases, for example, what seems to be self-hatred may be well-intended sympathy or guilt. The sympathy or guilt may not be warranted. It may be a pernicious delusion. The point, in any event, is that it’s quite implausible to think that the sole or main explanation for white liberals’ relative lack of in-group bias, and apparent wish to become an ethnic minority, is self-hatred. Like any large human group, white liberals are a varied lot, and their differences from other groups concerning bias, and the desirability of becoming an ethnic minority, are unlikely to have a single, simple explanation.

It seems that Jews were included in the category of whites. It would have been more useful to separate the two groups. Among ethnic groups, only blacks vote Democrat more than Jews do, but when it comes to liberalism, no minority group exercises a more outsize influence than the Jews. We see this in academia, the media, and Hollywood, and in liberal issues from feminism and abortion to open borders and endless interventions in the Middle East. Although Jews are only about 2 percent of the population, it would have been interesting to know their answers to the survey questions.

Carl’s take on white liberalism would have been more accurate and comprehensive, I think, if he had considered the role of Christianity. Just as liberalism arose in response to the corruption and exploitation that had characterized the European monarchies and aristocracies, so Protestantism was born as a reaction to the corrupt and exploitative Catholic Church. The liberal notion that everyone has dignity and is of equal value comes from Christianity, and it endures even as Christianity has declined.

This brings us to one of the most difficult issues of our epoch—namely, moral values after Christianity. It is both a virtue and a vice that liberalism is negative in regard to moral value. After centuries of religious wars, men learned that state-enforced religion is not a good idea. Nevertheless, the need for moral cohesion does not go away for that reason. And one lesson we are learning today is that the negative moral character of liberalism allows for endless moral confusion and conflict. Christians believe they are discriminated against by gays. Gays believe they are discriminated against by Christians. Viewing each other from antithetical perspectives, the groups can only talk past each other, their conflicts having no rational solution.

Such phenomena betray the true character of those laughably optimistic and superficial abstractions: multiculturalism, pluralism, diversity. It pleases the shallow moral sentiments of intellectuals to say, “Although we have conflicting values, we can nevertheless live well together thanks to tolerance.” Usually, though, this amounts to sheer hypocrisy. People make others conform to them, so that there is really nothing to tolerate, and no pluralism or diversity, either.

Generally speaking, impartiality and fairness are excellent things. Nobody wants a doctor, or lawyer, or accountant to give him lesser treatment just because he doesn’t have the “right” group identity. The political problem is that people tend to use group identity (nation, religion, ethnicity, gender, sexual orientation) to advance their personal interests. Here, then, is what makes multiculturalism such a liability. Most people are neither exceptionally fair-minded nor acute in their understanding of things. Thus, groups are by no means willing to accept unequal outcomes, even if fairly arrived at, because deep down, their desire to matter in the eyes of other people trumps their sense of fairness. Certainly, it is not easy for a person, with his group identity in mind, to say to himself, “We have simply achieved less than you.” For many, it is preferable to cry foul, or practice some other manipulation, in order to obtain their ends and appear more worthy of esteem to others. Nor are people necessarily aware of what they are doing. Man has a knack for lying to himself, and constantly strives to impose his will on the world.

For all that, whether owing to nature, to nurture, or most likely to both, group differences persist. It is to be hoped that a more responsible and foresighted politics will produce better jobs for more Americans, along with other goods—health care, education—whose costs do not continue to spiral out of control. As a result, intergroup resentments would decrease. Unless that happens, the lesser performances of certain groups—and blacks and Hispanics in particular—probably will become greater liabilities as demographics change and “people of color” gain more political power. The growing trend of insisting on group parity in every high-status field is not compatible with remaining internationally competitive and maintaining an edge on the Chinese. Already hatred for whites is widely seen as a form of moral sophistication. If things continue apace, conditions for whites will certainly be worse in thirty years. So, Jeremy Carl and others are not at all wrong to worry about whites no longer being an ethnic majority. Such concern is merely rational, and hardly makes one—trigger warning!—a “white nationalist.”

The general problem of group differences and conflicts comprehends the sexes. Because of the greater male variability in intelligence, most geniuses continue to be men, a reality one can confirm by examining the most accomplished people in virtually any field. Men are also higher (on average) in motivation than women, in no small part because they must be to have a competitive sexual market value. None of this means there aren’t lots of highly talented and deservedly successful women. Still, as with ethnic groups, there is no such thing as meritocratic gender parity, and again, as with ethnic groups, women are hardly inclined to accept that.

It is the irrational character of human nature that makes “social justice” so very dangerous. “Social justice” should be understood as a kind of neo-Protestant Puritanism, individualistic and freewheeling. The Catholic thinker Joseph Bottum writes:

The new elite class of America is the old one: America’s Mainline Protestant Christians, in both the glory and the annoyingness of their moral confidence and spiritual certainty. They just stripped out the Christianity along the way.

[T]he post-Protestants believe the best way to know themselves as moral is to define themselves in opposition to…bigotry and oppression—understanding good and evil not primarily in terms of personal behavior but as states of mind about the social condition. Sin, in other words, appears as a social fact, and the redeemed personality becomes confident of its own salvation by being aware of that fact. By knowing about, and rejecting, the evil that darkens society.

Like Christianity itself—which was amorphous and incoherent at its inception—moral values are not static, but readily change according to circumstances and human interests. However crude and destructive, “social justice” does represent an attempt at providing moral cohesion. Nor is this changed because the concept is largely motivated by envy. And yet, as people are increasingly unconstrained by past traditions and customs, their liberty to pursue their own moral values (as they understand them), and their liberty in general, become greater burdens for the state, and greater threats to liberty itself.