How “Gary” Lost Its Glitter 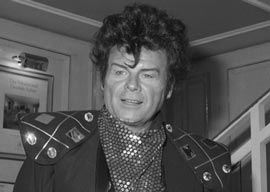 The Punch editor (and all around crusty old fart) observed late-ish in the 20th century that modern life’s absurdities rendered the satirist’s role redundant.

But too many self-appointed satirists out there apparently never got that memo (or should that be pink slip?) They certainly don”t understand their chosen medium.

Surely no one who made it all the way to the end of Swift’s most famous essay believed he was seriously advocating cannibalism. It’s that cocktail of mock-reasonable tone and horrific content that makes “A Modest Proposal” the ur-text of modern Western satire.

Apparently (and not surprisingly) a lot of latter-day pseudo-Swifts haven”t read him, or Punch, or probably much of anything at all. Judging by these fellows” confounding popularity, neither have their readers.

No doubt the guys behind that fake Salon.com Twitter account are flattered by the number of people who fall for their tweets, but by rights, they should be embarrassed. How is “Fox News is only America’s most trusted news channel because the nation is full of crypto-fascists” indistinguishable from the average authentic Salon.com story?

Likewise the CBC radio show “This Is That.” In a country where this and that are genuine news stories, how exactly is it self-evidently outrageous that a Canadian strip club would get a six-figure arts council grant?

See, The Onion at its very best twists each conceit just enough to make you almost imperceptively twitch. “Wall Street Firm Develops New High-Speed Algorithm Capable Of Performing Over 10,000 Ethical Violations Per Second” “ or, my (non-9/11 issue) favorite, “Fun Toy Banned Because Of Three Stupid Dead Kids” “ won”t be mistaken for genuine headlines, but only after a nanosecond’s beat. That tiniest of time-delays gives great parodies their frisson of fun.

England’s The Daily Mash gets it, too. An obvious parody of the Daily Mail, its occasional lapses into blind, blundering Farage-bashing mars its otherwise impeccable content.

(No doubt you”ve noticed that liberals are at their dumbest, and unfunniest, when complaining about how stupid and humorless conservatives are?)

Great fun was had by all after a BBC morning radio show recently ran a Daily Mash story as real, but the Beeb got the last laugh because, like almost all Mash parodies, the piece had sprung from a grain of truth.