How to Cheat Fairly, Date a Model Safely, and Discipline Teenagers Effectively 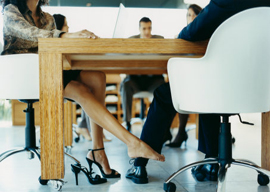 I am a 48-year-old man and have been married for about 25 years. My wife and I have not been intimate for the last 17 years. So I have engaged in a number of affairs (most of which she found out about) over that time. Most of the time these were serious emotional attachments and not just sex. On two occasions (once in the late 1990s and then again about a year and a half ago) I actually moved out of the house for about a year, but the break was never total. (I’d come back to fix things; we would talk”or she would just rant at me sometimes”at least daily.) My latest transgression was a much younger single woman from my old job; I really lost my head over that one and still have a lot of fond feelings for her, but I just know we cannot have a life together.

Although my wife and I have a lovely, successful adult daughter who lives a few hours away, we have both acknowledged that we probably never should have gotten married. That said, there is a genuine connection between us. Although I am very unhappy with my situation, I feel a strong sense of obligation and because of the guilt, I know I could never leave her again”especially given her lack of any support network (almost no family or friends), her lack of a career outside of the home, and a number of serious health problems she has developed over the past few years.

My wife has said to me, “Look, I know you need nookie”go ahead and do what you want, but (1) I don’t want to ever know or hear about it; (2) don’t fall in love with whoever you are messing around with; (3) you better be at home every Saturday night; and (4) don’t EVER EVER go near that little putanella from your old office again!”

“You are allowed to lie to all women; it is not a privilege merely for your wife to enjoy!”

This seems like a reasonable set of ground rules, though I find it doubtful I will ever find a gal willing to put up with such a situation. More importantly, the succulent younger cookie (a k a “la putanella”) is letting me know that she’s still interested, and I am sorely tempted. Aiuta me, per favore!

Dear Attempting to Stay Lashed to the Mast While the Siren Sings in NYC,

You are a downright disgrace to cheating men worldwide if you can’t follow those four very generous and basic rules of cheating. Obviously you need a refresher on how to be a respectful and considerate cheater:

1. To avoid that your wife ever finds out or hears about your philandering ways:
a) cheat with women outside of your office, her social scene, or her age group;
b) don”t tell your friends or allow them to be a party to your activities;
c) empty your pockets before you get home;
d) only give women your direct line at work; and
e) don”t keep your condoms at home.

2. To avoid falling in love, change women constantly. You have a huge green light staring you in the face to have as much sex as you want with as many women as you want, and you are going to form a lasting relationship? Establish a one-month rule; after a month they get dumped, no matter what.

3. Take the women out during the week. Tell them you have to travel for business on the weekend, or that you spend Saturday night with your daughter, and throw a sick grandchild in the story as well. You are allowed to lie to all women; it is not a privilege merely for your wife to enjoy!

4. Forget about the “putanella”; they are a dime a dozen. As they say in Italy, “When the Pope dies, they always make another.”

Your wife has given you more than a “reasonable” set of ground rules! She seems to believe the only problem with your marriage is the lack of sex, so she generously set up rules to allow for sex, not intimacy. So NO, you will never find a girl willing to enter a serious relationship and live within your wife’s rules unless you take a trip to your local loony bin. If you can”t follow the rules, then you don”t simply want more sex”you want an entirely different life! If you have the audacity, you can always try to renegotiate the deal by offering your wife some serious perks such as a new house in the location of her choosing, a new car, a personal chef, and a pool boy just for her. Yes, money, money, money, and more money is your only hope if you can neither follow the rules nor leave her.