How to Fly in Comfort 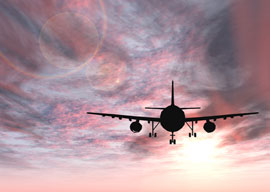 About 44.3 million Americans are going to be flying this holiday season, which is a million more than last year. This is ironic because flying becomes about a million times worse every year. Here are ten ways to make it easier to hurl through the sky at 600 miles an hour and get there ten times faster than you would by any other means.

1. PRINT OUT YOUR BOARDING PASS
If you”re not checking bags (why are you checking bags anyhow”don”t you have sweaters at your mom’s?), having a boarding pass in hand means there is almost no limit to how late you can check in. When it’s a small airport that I know won”t have a big line, I”ll show up as the plane is boarding and still make it with plenty of time to do a couple of shots before the flight.

2. GET WASTED
The space you”re provided has shrunk to POW-in-a-bamboo-cage size, so you need to rub numbing cream all over the inside of your body to survive. That means getting to the bar fast and piling in as much hard liquor as your body can hold. That also means no hogging the bartender’s time with girl drinks like blackberry margaritas. If you time it right, you”ll slump down in your seat right as your body turns out the lights.

If they delay the flight, you will fall asleep at the gate and miss your flight. This happened to me once. Waking up at 2AM in an abandoned LAX is about as depressing as it gets.

“We’re all in this together, so maybe try to compose yourself a little, you gigantic fucking baby.”

3. TOLERATE FLIGHT ATTENDANTS
Anyone who’s ever flown first class knows that when Alec Baldwin got thrown off that plane, he”d been dealing with some of the biggest cunts the service industry has to offer. It takes years of “service” to get that gig, so the stewardesses who finally make it have entitlement issues out the wazoo.

The ones in coach are better, but what’s with the eye rolling when you push that button asking them to bring you a drink? The icon on the button is a stewardess bringing you a drink. I”ve noticed they”ve recently begun announcing, “We are here for your safety but we can also provide assistance if need be.” No, bitch, it’s the other way around. “You ain”t nothin” but a waitress in the sky.”

However, as with cops, being a dick is only going to bite you in the ass, so kiss their butts and stay as calm as possible. Start all drink requests with “I hate to bother you, but…” and keep smiling. Sliding a male steward $20 usually garners a 200% return on your investment, although it doesn”t work with stewardesses. Male stewards will swipe their card to buy you movies and bring you enough free drinks to fill your briefcase. I’ve never asked for a hand job, but I don’t think it would be out of the question.

5. IT’s NOT A SLEEPOVER
I”ve railed against pajamas before, but every time I go to the airport, I”m shocked to see how few people got the memo. Women take this cuddly culture a step further by bringing a stuffed animal into the mix. It’s bizarre to look at a woman over 20 carrying a goddamned teddy bear on a plane. This is after she and her pajama-wearing brother get up from the nap they just took on the floor at the gate as if someone accidentally built an airport in their bedroom. When you indulge yourself like that, it’s a visual fart to the eyeballs. We”re all in this together, so maybe try to compose yourself a little, you gigantic fucking baby.

6. DON”T RECLINE IN YOUR CHAIR
If a tiny child is behind you, or if it’s an overnight flight and the person behind you already has their chair back, then go bananas. However, those are the only two exceptions. I am consistently mortified by the number of people who have no problem impaling me on my tray just so they can watch a movie at a slightly more comfortable angle. They don”t even look back. That’s like a dude walking into a crowded bar and sitting on a stranger’s lap because there aren”t any seats.