I Know Why the Caged Bird Is Hilarious 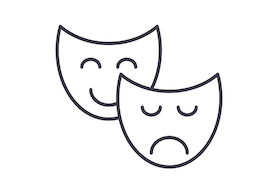 The most important lesson I ever learned about comedy was inadvertently taught to me by an old, fat black woman. The year was 1977. My fourth-grade English teacher, Mrs. Dilworth, spoke with the kind of Southern drawl that let you know she was old-school…not West Coast-born, but from someplace where the greens were collard and the peas were as black-eyed as an uppity nigra tryin’ to book-learn. Old Mrs. Dilworth probably thought she had it pretty good in L.A.

Until she met me.

I was never a class clown. Class clowns will do anything for a laugh. They get humor by debasing themselves. They’ll eat glue or shove worms up their nose. Class clowns are pathetic. I was the class satirist. Satirists get laughs by making jokes not at their own expense, but at the expense of others. The class clown’s job is to entertain; the satirist’s job is to terrorize. Isolate someone’s weakness—appearance, cadence, a humiliating moment (farting in class, falling off the jungle gym)—exaggerate it for effect, and make it stick to them like glue.

I had one rule: Don’t make fun of the retarded kid. We had one retarded boy in our class, and I made it clear that he was off-limits, not just from my barbs, but from those of my classmates. Because mocking the tards is easy. But teachers? It was open season on them. My social-studies teacher that year was a marble-mouthed white spinster named Miss Byers. And Miss Byers could not say the word “revolution.” It would always come out as “relvotution.” After bringing this to the attention of my classmates, I would, day in and day out, force her to say the word by asking the same questions over and over again. “Miss Byers, what was the war that George Washington won?” “Miss Byers, what was that war against the French royalty?” “Miss Byers, what was the war in Russia that killed the czar?” I became a hero for finding new and increasingly comedic ways to make her say the word she couldn’t wrap her unkissed lips around.

But back to old Mrs. Dilworth. One day, she decided to teach us about her hero, Thurgood Marshall. For most of us, it was our first time hearing that name. In the course of the lesson, I fired off an entirely forgettable one-liner: “I bet when he was misbehaving as a kid, his mother must have scolded him, ‘Thurgood, be good.’” It got a few chuckles, about all the line deserved, but it sent Mrs. Dilworth into a blind rage. “No way you gon’ make fun o’ dat great man in mah class! You goes sits in dat corner ’til I tells you to come back.” And like that, there I was, banished to the corner.

And here’s where the lesson in comedy comes in. At recess, all anyone could talk about was how David got punished for saying “Thurgood, be good.” The joke spread like wildfire. It developed a life beyond what it organically should’ve had. The next day, it’s all Mrs. Dilworth heard. She started stomping her feet, screaming at the top of her lungs, “Y’all betta quit dat nonsense! He da greatest man who ever live! Ain’t nobody gon’ ever say dat joke agin!”

But the more she tried to prohibit it, the more it spread, because a stupid little one-off had now become dangerous. For many of my classmates, it became a test of bravery to say “Thurgood be good” in Mrs. Dilworth’s class. It was no longer about the joke itself, but Dilworth’s comically frustrated reaction.

“The No. 1 most effective way to ensure the spread of a joke is to try to ban it.”

The lesson I learned is, the No. 1 most effective way to ensure the spread of a joke is to try to ban it. A bad joke becomes legendary if you label it dangerous, and the more you stomp your feet and yell at people for repeating it, the more sadistic pleasure they will take in tormenting you with it. And this is not some obscure comedy principle. This ain’t inside baseball, folks. This used to be the kind of thing that all comedians instinctively understood…but now, it’s become a lesson forgotten.

These days, most American comedians, once they make it big, feel the need to become “socially conscious,” which often necessitates denouncing the jokes that made them famous in the first place. Sarah Silverman and Amy Schumer are perhaps the best examples of this. Having landed on the map for performing “naughty” material about race and gender, Oldy and Fatty have now adopted the veneer of the great humanitarian, renouncing much of their past work. And Silverman’s ex-beau Jimmy Kimmel? Does anyone remember how he first became famous hosting The Man Show, a Comedy Central series that was quite literally built around the crass objectification of women? The humor on that program derived from nothing more than bouncing boobs, jiggling butts, and “wimmin are either sluts or dykes” jokes. But look at Kimmel now, playing the role of the conscience of the nation…weeping during his monologue over Trump’s “misogyny” (as an aside, were Kimmel on the right, there’d be media vultures and leftist attorneys aplenty offering huge cash incentives to any woman who could come forward with stories of sexual harassment from the Man Show set. I mean, do you really think that show could have been on the air for five years without some overly sensitive breasty babe feeling offended or disrespected by Kimmel’s gaze or offhanded comments?).

Schumer’s ex-boyfriend Anthony Jeselnik (a.k.a. Anthony Jizzle-neck, his Comedy Central Roast nickname) is another guy who rose to fame with “dangerous” material. And now, he’s the No. 1 cheerleader for politically correct comedy. But these self-righteous hypocrites—Schumer, Jizzle-neck, Silverman, and Kimmel—are, in a way, merely doing what’s expected. It’s just class clowns being class clowns…people who only got into comedy for the attention now bending to new social trends that allow them to retain the attention they crave like heroin. Back in the mid-1980s, master comic Richard Belzer did an entire year’s worth of a running gag involving him going on talk shows to announce that he was done with telling jokes, because now all he wanted was to be the next Bob Hope, the great humanitarian revered simply for existing, the goodwill ambassador who can do walk-ons on Carson without ever needing to actually write material.

For Belzer, a true satirist (as opposed to a class clown), it was parody. But now, it’s the goal that today’s star comedians strive for.

So, sure, I get why comics who make it big decide to try to be greater than their profession. But what I don’t get is how these cretins fail to realize that the more they display offense on social media every time someone posts a sieg heil or a racist meme, the more that encourages people to keep doing it. If you can get a rise out of Sarah Silverman just by tweeting that she should be shoved into an oven, it’s guaranteed that people are going to go to town on the oven jokes. Because the point isn’t about Jews or ovens, but about a formerly “edgy” comedian acting like an outraged Marx Brothers dowager. Silverman never stops tweeting about how “every day someone tells me to get in an oven,” so therefore, every day someone tells her to get in an oven. In 2016, when online trolls began attacking SNL cast member Yaphet Kotto (I mean Leslie Jones) over the all-female Ghostbusters remake, she actually felt the need to respond with great seriousness to purposely over-the-top racist provocations that were intended solely to elicit an angry reaction, at one point literally telling a Twitter troll, “Stop saying I gave mankind the AIDS virus. I DIDN’T.” The fact that she responded to that nonsense in a humorless manner only led to more of it.

What the fuck? When did successful jokesters forget the lessons we all know about how to make a stupid, bad, or insulting joke more popular than it rightfully ought to be?

As my friend Bjarni Gautur of Troma Entertainment cogently pointed out on Facebook a few days ago, getting pissed at “Nazi” troll comments or tasteless jokes is “as laughable as claiming 30 years ago that playing Dungeons & Dragons or listening to Twisted Sister is turning kids into murderous Satanists. We get it, you’re a grandpa who thinks edgyboy humor equals reality, not understanding that ‘triggering’ people is one of the main factors in these provocative jokes.”

Except unlike in the 1980s, today’s “grandpas” are themselves former edgyboy comics. It’s absolutely pathetic. Recently, Anthony Jeselnik went so far as to claim that politically correct censorship has been good for comedy. After telling Larry King that the pressure to self-censor is worth it because PC culture has brought us “transgender acceptance,” Jeselnik declared that the “obstacle course” created by fears of PC censorship and job loss makes comedians work harder, thus birthing better jokes! This line of reasoning was also spouted by The New York Times’ Jason Zinoman, who reasoned that speech restrictions help comics become more creative because they have to learn to joke about topics other than the ones they may have actually wanted to joke about. And Paul F. Tompkins, a self-serious comedy writer who, unlike Jeselnik, is massively unfunny (Jeselnik can write strong material…just never about trannies), routinely lectures his fellow comedians about how “political correctness is good for comedy” because it “discourages lazy joke writing.” He stresses that it’s the job of the comic not to challenge the audience, but to cater to the current social pressures of the day. “Adapt or die! If this is not a thing that we joke about anymore, find something else to joke about.” That, he claims, is how you make comedy way more awesome!

If it’s true that comedy is improved by the fear of censorship and an oppressive pressure to avoid forbidden topics, why didn’t Nazi Germany or Stalinist Russia produce the greatest comics of the 20th century? As borscht belt legend Alan King pointed out during a lighthearted debate at the Oxford Union in 1987, oppression does not automatically forge great comedians. If that were so, he said, then the best humorists in the U.K. would be Pakis.

He’d probably be arrested in England for saying that today. And Silverman, Jeselnik, and Tompkins would visit him in his cell to lecture him about how his imprisonment is actually going to make him a better comic.

As a longtime member of the Friars Club, it’s probably for the best that King never lived to see comedians who used to be top-notch roasters embrace the notion that censorship is good for the craft. George Carlin’s probably better off dead too. Although perhaps Jeselnik or Tompkins can favor us with a new version of his legendary “seven dirty words” routine. Something like, “How not being able to say the seven dirty words has made me a better comedian.”