I Ain”t Afraid of No Black Women 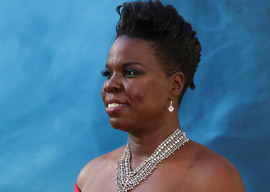 America is obsessed with keeping black women happy. The bigotry of low expectations is strong with the treatment of black men, but when it comes to they baby mommas, shit is off the chain. When Valerie Jarrett showed up for work as Senior Advisor to the President, they handed her the entire White House. Loretta Lynch is our Attorney General despite being unable to handle a simple 911 call. We won”t shut up about how unpresidential Donald Trump is, but when Michelle Obama steps into a car with Missy Elliott and begins singing a song that contains fun versions of the words “motherfucker” and “nigger,” we call it “glorious.”

That’s why, when current Ghostbusters star Leslie Jones reached out to the head of Twitter and said, “Jump,” he bleated, “How high?” She was annoyed that someone had made it look like she tweeted, “uncleTom fag @nero needs to get his racist ss out my mentions. Shit liek dis make me think that we need to gas dese goddamn faggots to death.” The prankster was talking about Milo Yiannopoulos, who had recently penned a bad review of Jones” movie. Leslie went bananas and screamed, “THIS WAS NOT ME” and “I DID NOT POST THIS!” As she was ranting, Nero calmly quipped, “If at first you don”t succeed (because your work is terrible), play the victim” and “Barely literate. America needs better schools!” Leslie had had enough and told Twitter, “I understand you got free speech…. But there has to be some guidelines.” The head of Twitter immediately responded with “DM me when you have a moment.” Milo was banned forever the next day.

“Does free speech include not being punished for things you never said? It should.”

There are a lot of conspiracy theories behind what took place. Many pointed out that this all happened minutes before Yiannopoulos did a talk at the RNC. Others passed around a screenshot claiming Jones accidentally sent out a DM stating that Feig was the one penning the abuse and it “got some good press.” I think it’s much more simple than that. Twitter founder “Jack” is a nerd who was never cool and now that he’s rich and powerful, black people finally want to hang with him. He’s been seen bro-ing down with DeRay and is a passionate supporter of Black Lives Matter. Sure, he’s insisted that Twitter never censors, but that’s only if it doesn”t affect his social life. Having an angry black woman who is also famous show displeasure with his app is a popularity death knell. The fact that Nero never sent the offensive tweet and it’s directed at him and not her is irrelevant. Even libertarians are running with the straw man and insisting Nero should be banned because free speech doesn”t include loving racism. Huh? Does free speech include not being punished for things you never said? It should. There seems to be some deep-seated disdain in our society for the accused, especially if he’s a Christian. We saw the same kind of apathy when Nakoula Basseley Nakoula was sent to prison for a year because he made a Muhammad video. Even conservatives shrugged and said, “Well, he shouldn”t have violated his probation,” though none of them could tell me what the violation was (he changed his name on the credits because he didn”t want to go the way of van Gogh’s great-grand-nephew, but that was technically illegal). I was disturbed by that case because Hillary guaranteed an arrest before we even knew who he was. Why wasn”t there more outrage over that? We just had a kid lose his foot because he stepped on an IED in Central Park. The government said it’s just a firework, so we nodded and said, “It’s just a firework.” When did the truth become so inconvenient?

I realize Twitter is a private corporation and they don”t owe anyone a membership. The point here is, the culture behind the move is a dangerous level of flailing capitulation that permeates everything we do. We all know Jones wasn”t leaving Twitter with “tears and a very sad heart,” as she put it. She’s ugly and black and abnormally large. You can pretend she’s “absolutely stunning,” but we have eyes and so does she”and so does black America. You see, where we will make our retards prom king, black Americans terrorize anyone even slightly unusual until they are calloused like leather. It may be a good thing in the long run. I”m not here to judge, but the first thing a mentally handicapped black kid learns is “Get out of my face. Leave me alone.” You know that Jones grew up as the butt of many jokes. In fact, it’s an integral part of her comedy. On SNL she did a sketch with the midget from Game of Thrones and the entire joke was that she’s a gigantic beast that wants to eat him. Soon after she became an SNL cast member, she made a joke about how nobody wants her (because she’s ugly), but back in slave days she”d be a prized possession because they could breed her with other big blacks and make superslaves. This is offensive and provocative and hilarious and true (I never said she wasn”t funny). The NAACP was furious and many asked who the hell this woman is and how she got the job.