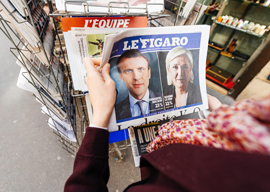 And all at once, a sigh of relief could be heard in boardrooms across the globe.

The French presidential election ended not with a bang, or a whimper, but beads of perspiration being wiped off the brows of the global economy’s biggest winners.

Emmanuel Macron, a former investment banker and Minister of Economy, Industry and Digital Affairs, achieved a clear victory with 65.8% of the vote. Populist upstart Marine Le Pen, heir to the immigration restrictionist Front National party, claimed just 34.5%. This was a brutal disappointment”the number of spoiled ballots and abstentions actually numbered to the second-highest vote total, knocking Le Pen down to third place.

If 2016 was the year of nativist resurgence, 2017 is the year globalism strikes back.

The twin victories of Brexit and Donald Trump last year seemed to lend momentum to nationalist uprisings all through Europe. But with the routing of Geert Wilders of the Dutch Freedom Party in the Netherlands, and now the Le Pen loss, it would seem the West’s brief love affair with anti-plutocratic populism has faded, similar to feelings of regret after a drunken one-night stand.

And, strangely enough, it’s a good thing the beast of provincial rage has been beaten back, for now.

I say that as someone who loves nothing more than to watch liberal elites get their clocks cleaned by frustrated voters in the hinterlands who find themselves falling behind economically.

Would it have been great to watch the French political establishment torn asunder by a woman leading a pack of patriots dedicated to reclaiming their country from the Davoisie? Oui! And for a moment there, it seemed like Le Pen could have engineered a come-from-behind victory, if this dispatch from The New Yorker is to be believed.

But it wasn”t to be. Like the fictional characters in Michel Houellebecq’s Submission, the French folded like crepes, opting for the status quo.

Macron will take office as the youngest French president in history. But his platform consists of the same crusted-over clichÃ©s of neoliberalism. His En Marche! party message focused on optimism, internationalism, loose borders, and dedication to European integration”not exactly fashionable terms outside large metropolises.

Paeans to progress soothe the anxieties of the globe-trotting class. But they are no solution to the exhausting ennui afflicting psyches in prosperous countries. They don”t heal what Kevin Williamson calls “the great paradox of our time,” which is the fact that we live during the wealthiest era of human existence but still suffer from a widespread feeling of aching discontent.

So France will inch along, nothing changed, nothing gained. And to the dismay of Macron’s well-heeled benefactors, the respite won”t last. “If this next mandate is a failure, you can be sure Marine Le Pen will win next time. And Marion MarÃ©chal Le Pen [the elder Le Pen’s niece] has forty years ahead of her to become President,” writes Lauren Collins, echoing journalist Anne Sinclair.

This may be the best possible outcome of Sunday’s election. If President Donald Trump’s record has been any indication, the populist revolt against the existing system is not ready to govern.

The first 100 days of the Trump administration have been disappointing, to say the least. Even the most dewy-eyed Donald supporter has to admit he expected more. The random attack on Syria showed that Trump is willing to forsake his campaign motto of “America First.” The huge effort to push for an Obamacare replacement is really just a thinly veiled campaign for a rich-targeted tax cut. His family-connected businesses are secretly wooing Chinese investors with promises of eased restrictions on cheap foreign labor. The just-passed spending bill not only neglects to fund the wall along the Mexican border, it also expands the H-2B visa program, which encourages cheap foreign labor to compete with domestic workers.

It was always going to be an uphill battle for Trump, as president, to reshape America both militarily and economically. Even so, these retreats on key campaign promises are an inauspicious start for the young administration.