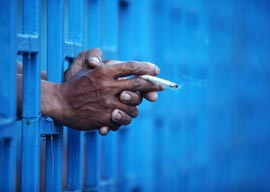 Abolish prison and give everyone a gun. The end. Good night. Oh wait, that’s not enough for a column? Okay, how about legalize drugs too? I”m not kidding. I know it sounds outrageous but hate facts often are.

Look, I”m not suggesting we send all the guards home and open up the gates tomorrow. America is too ensconced in prison culture. Most prisoners today have become bad people and it’s because of prison. So, for the sake of the argument, let’s pretend a massive plague killed everyone in prison. It’s a horrific tragedy beyond our control and conspiracy theorists are going to have a field day but it happened. Now can we legalize drugs, abolish prison, and give everyone a gun?

I asked More Guns Less Crime author John Lott about it and his answers were disappointing. Empiricists are no fun. “I don”t know,” he replied. “We don”t have the data.” He did concede that America has an intense prison culture with “38% of black males having a felony background.” He also backed up Bill Whittle’s claim that the remarkably gun-heavy Plano, Texas has pretty much the lowest crime rate in the world (0.4 homicides per 100,000). Lott is a human Google machine when it comes to guns and crimes and I learned a lot from our conversation. I learned the black family was far more intact in the 1950s and their propensity for crime back then was actually similar to whites. I learned almost nobody gets arrested simply for marijuana possession (0.3% in Arizona) and the vast majority of drug offenses involve trafficking.

“Take drugs out of the equation and crime’s pretty much over.”

He told me the closest we have to my bizarre hypothetical was New York City during the American Revolution when the British banned the NYPD from existing because they were scared it would morph into a militia. This didn”t turn the city into a war zone. Shopkeepers simply hired private security guards with guns and everything turned out fine (until the Civil War).

I”m reminded of the “Baltimore Batman“ who fended off looters with a machete last month. Unarmed business owners tend to do really badly during riots. It seems like every time there’s a major shooting, it happens in a gun-free zone. The Batman shooter chose a theater that was very public about its hatred of guns. New York City is about as gun-free as it gets. You go straight to jail whether your gun is bb, paint, or scuba in this town. We”re still at about a murder a day. New York is a perfect example of what happens when only the bad guys have guns.

The first few years without prisons may be a little rocky. It’s like outlawing abortion. When I suggest such a world, liberal women ask me what they would do if they got pregnant in high school. However, they got pregnant in pro-choice America. The guy who ejaculated in her knew there”d be no consequences. In a pro-life America, the guy who got her pregnant would see his cousin Vinny making child support payments every week. The girl who got pregnant would have seen her sister have to take a year off school to take her baby to term and give it up for adoption. You wouldn”t see girls getting pregnant in a world with consequences.

This is what guns provide. If someone rapes your sister, he dies. Same with murder, assault, grand theft auto, and any other crime involving a victim with a gun. That leaves drug territory. Just as we”ve ruined the black family by monetizing single moms, we”ve monetized murder by delegating drugs exclusively to bad guys. About half of the 2.2 million people we have in prison are there for drug-related charges. Let’s have nerds making and selling drugs. I did speed as a teenager and it sucked. The high was really sketchy and the toxins they mixed it with oozed out your pores like tar. Today nerds make speed. It’s called Adderall and it drives the economy in every major city, especially in media. In fact, I”m on it right now.

When I did my podcast with Galen Baughman he said 5% of prisoners are meant to be there. According to him, 95% are there because of a flaw in the system. He spent nine years in prison as a sex offender because when he was 19, a 14-year-old boy insisted on sucking his dick. Galen’s gay but I can tell you all men, regardless of sexual proclivity are severely handicapped when it comes to refusing blow jobs. I”m pretty sure I had a 14-year-old girl blow me when I was 18. I didn”t go to jail. I got a high five. Galen spent about half his time there in solitary confinement. That’s four and a half years for a blow job. I told him that if I was the boy’s father, I would have kicked his ass and he agreed. You see, we”re not assholes anymore.