If Drugs Could Kill 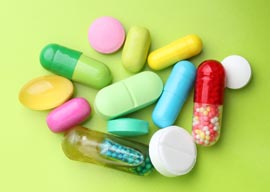 After combing through the data for hours, academics have discovered the cause of the mass shooting in Charleston. Turns out it was comedian Amy Schumer’s fault. You see, she once joked, “I used to date Hispanic guys, but now I prefer consensual,” and that led to a climate of racism that Dylann Roof seized upon when he killed nine people. Previously the experts were sure it was a flag’s fault. They also blamed guns (though few mentioned how these shootings always happen in gun-free zones). I”m a little confused by this latest discovery because I remember George Lopez making a joke about how Chicanos don”t care when their wives have headaches. They just say, “Sucks to be you, roll over.” (I”m paraphrasing.) Black churchgoers likely survived the Lopez joke because the climate hadn”t reached its breaking point yet. I guess offensive comedy’s deadly effect is cumulative? This must be why Amy apologized.

“So what happens when we combine suicidal urges with horrifying anxiety? I”m guessing it’s even worse than hearing a rape joke.”

One thing that never seems to come up is how high Roof was. I”ve been watching all the major news media outlets, and the number of Big Pharma ads we see in between segments is inversely proportional to how much we hear about Big Pharma’s culpability in all this. At the time of his arrest, Roof was carrying Suboxone, a powerful anti-opiate made by the pharmaceutical company Reckitt Benckiser. It sounds like he was battling Oxy addiction, which is another thing you never hear about. OxyContin addiction is rampant all over America and is well documented in Sam Quinones” incredible book Dreamland. This is likely why Purdue Pharma was forced to pay $600 million in 2007 due to the “misbranding” of Oxy. I can”t recall TV news covering this epidemic, but I see it with my own eyes everywhere I go. In rural Ohio, hillbilly junkies are all over the trailer parks. They start out with Oxy and then switch to heroin because it’s cheaper. You see this in Florida, too, and near my place in upstate N.Y. A kid OD”d about a mile from my house and we are in the middle of nowhere. I find it really disturbing to drive 100 miles from New York City only to hear a farmer in camo bitching about the local heroin dealer and what he’s doing to the community. Suboxone is used to get off heroin but it’s said to bring just as many problems, including “psychosis.”

These are the drugs we know Roof was on, but what about all the pharmaceuticals all these overmedicated kids trade like PokÃ©mon cards? Adderall is treated like aspirin in America today. I”ve done this drug quite a few times and it is nothing to scoff at. It’s not like speed. It is speed. It says “amphetamine” right on the bottle! Yet we have no problem giving it to “one in 20 American children between the ages of 4 and 17.” Manufacturer Shire Pharmaceuticals was forced to pay $56.5 million after claiming Adderall can “normalize” children. I find trying to tackle 10 milligrams is tricky, but bloggers, college students, and young professionals talk about 40 milligrams like it’s not 400% more than an already wild ride. How the hell do they go to sleep? This is no small detail when it comes to mass shootings because the No. 1 side effect of sleep deprivation is madness. I did a documentary about sleep loss called A Million in the Morning where we tracked twelve people as they tried to stay awake for five days watching movies. Only two made it to the end and they all went (temporarily) insane. One guy quit after he watched a beagle that couldn”t possibly be there climb up a plant and stare at him. I interviewed a neurologist about the side effects after we were done shooting. He came from Czechoslovakia and told me Stalin would use sleep deprivation to trick prisoners into recommending the death penalty for themselves. After four days of no sleep, they would believe anything.