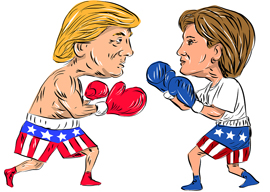 What if Hillary wins? We don”t have to think about what to do if we win. If we win, we will wear Hawaiian shirts every day and carry around our own personal beer stein that says “#MAGA.” It”ll be like when Vince Neil regained control of MÃ¶tley CrÃ¼e: The natural symbiosis of nature has been restored and we can all get back to work. I”m not sure I”ll talk about politics ever again. If we lose, however, it’s another story entirely. If we lose, the Hawaiian shirt goes from a funny gag to a scary gag like the one Robert De Niro wore in Cape Fear. Winning is everything, but losing is what we need to worry about for the next week. Being a “true American,” as Bill the Butcher said in his dying words, is all about loss. Entrepreneurs have a dozen failures for every project that succeeds. It’s surviving those 12 blows that makes No.13 possible. That’s why we are who we are (do you mind if I say “we”? I”m a Brit-born Canadian who’s been here for 17 years but I see all three countries as “we”). We developed a culture of grit where losing only made men stronger and more determined. In a commercial for his own shoes, Michael Jordan said,

I”ve missed more than 9,000 shots in my career. I”ve lost almost 300 games. Twenty-six times I”ve been trusted to take the game-winning shot and missed. I”ve failed over and over and over again in my life. And that is why I succeed.

I learned this quote from Bill Whittle, who added,

They don”t need help on what to do when you win. You run around with your arms in the air and you feel like the king of the world. That’s easy. It’s the humiliation, it’s the frustration, the anger, the shame, the self-recrimination, the tendency to make excuses and blame others. That’s what we need help with.

So here is how we”re going to lose: We are going to fight even harder to get this country back and we are going to fight dirty. When they go low, we are going to go lower. If they want to make it personal and ignore the facts, we”re happy to dive into the muck. The majority of the GOP refuse to do this and this is why they just became extinct. When Rush Limbaugh indicated that Sandra Fluke might be a slut for demanding birth control from a Catholic institution, conservatives were outraged he swore. Fuck them. We swear now.

We learned this from watching Trump and it’s a lesson that can”t be unlearned no matter who becomes president. He’s the centipede hatched from a dying GOP and we watched him go from an egg to a larva, past pupa and into the inevitable full-grown arthropod we see today. When the Huffington Post said it was only covering Trump in the Entertainment pages next to the Kardashians, Trump responded with “I fully understand why her former husband left her for a man. He made a good decision.” When Ann Coulter describes this moment in her book In Trump We Trust, she adds, “Imagine Mitt Romney doing that.” She’s right. It’s unfathomable. He was too wholesome and that’s exactly why he lost. Mitt never said “grab them by the pussy.” I don”t think he even knows the word. The man had zero skeletons in his closet, but that wasn”t good enough for America. They dumped him for being square. So, evolution brought us Ted Cruz. The job of the president is to uphold the Constitution, and Cruz could recite it forwards and backwards. Unlike Romney, he had the balls to stand up to anyone and seemed to thoroughly enjoy conflict. He was dumped for being too ugly and boring. This begot Trump. We went from a puritan virgin, to a virgin who can fight, to a dirty fighter on his third wife. If he loses, we will continue the life cycle and become a violent gang of dirty fighters. This is why, even if he loses, he won. Trump taught us that taking the high road doesn”t work. He taught us that intellect and decency and turning the other cheek get you slapped in the face. We don”t mind rolling up on Hillary and her supporters in our convertible and proudly declaring, “Afternoon, counselor,” as Max Cady did. It’s just as enjoyable as victory.

Life in a post-Hillary America is about revenge. If a professor is being pilloried for violating PC laws, we should go down to the president’s office and demand liberty. Milo Yiannopoulos did this when his DePaul University talk was shut down and it led to school president Dennis Holtschneider stepping down. We need to begin naming names. When bloggers and journalists shame an innocent person, we need to shame them back. Shannon Coulter, who has been annoying people for decades, recently began a campaign to obsessively harass stores that sell Ivanka Trump merchandise (ever notice these people are always running fake companies?). She needs to be punished for punishing the employees of a candidate’s daughter. Ugly thumb Hampton Catlin and his sadly androgynous husband Michael Lintorn Catlin got Brendan Eich fired for not being a fan of gay marriage. Let’s check in on them and their fake company and make sure they understand sabotage as much as Eich. When Adria Richards got “mr-hank” fired for making a dongle joke, nerds harassed her employers until they did the same to Richards. The Richardses and the Catlins of the world are not real bullies. They”re crybullies. The only thing holding us back was our own restraint and if Hillary gets elected, “the chains are off.” We thought it too gauche to mention that Arianna Huffington is so bad in bed, her naked body drove a man to homosexuality. Well, it’s not. It’s fun and it’s funny. I realize I sound like a Social Justice Warrior right now and that’s because I”m about to become one: a Social Justice Warrior Warrior.