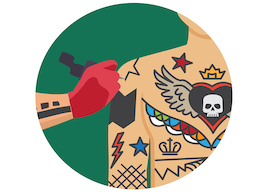 It is a humbling tribute to my complete unimportance that, having written perhaps 5,000 articles in my lifetime, I have only once been the object of concerted attack or criticism. This is especially humbling in the era of the social media, when it is so easy to insult people publicly.

The one exception was when I wrote an article for a Belgian newspaper in which I called Anglo-American rock music uncouth by comparison with Arab, African, or Latin American popular music. There was an outcry among young Belgians that no scurrilous or even hate-filled attack on any section of the population could have aroused.

That rock music is the nearest young people these days come to the sacred was proved to me by another experience. The only time I have really been censored was when I used the phrase fascist rally of libertinism to describe a rock concert to which a publication had sent me. The staff of the magazine in which I intended to publish this phrase threatened to go on strike or resign altogether (I forget which) if the editor allowed the phrase to go through. Being a man of iron principle—that I want to be paid for what I write—I allowed the editor to cut the phrase out.

It is a seeming paradox that in an individualistic society, people have difficulty in individuating themselves. They feel an inner necessity to stand out from others in some way, to be different, but experience great difficulty in doing or being so. They demand the maximum of individual freedom, only to immerse or drown themselves in crowds of people of the same or very similar tastes. They rebel by the most abject conformity.

“The social pressure to find the buried treasure within is great, and great precisely because most people are searching for what is not there.”

This, perhaps, explains the outbreak of mass self-mutilation in the form of piercings and tattooing that has overtaken the West. In many countries, the proportion of the tattooed in the population has now risen to about a third. No doubt most of them, if asked, would say that they were expressing themselves, or telling the world who they really are. There could be no better—or in my opinion sadder—testimony to mass inner emptiness than this.

When I first noticed the ascent of tattooing up the social scale about twenty years ago—the type of people who were getting themselves tattooed who would once never have dreamed of doing so—I explained it as the advertisement of a supposedly virtuous political identification with the marginalized in society, to whom tattooing had until then largely been confined, no doubt combined with the eternal desire to shock Mum and Dad. But this theory, if it were ever true, can be true no longer. Self-mutilation is now a fashion, true enough, and perhaps one should not look too deeply for the vagaries of taste; but a fashion that marks you indelibly is more than a fashion for, say, a silly hat or a polo-neck sweater.

When I wrote that the rock concert was a fascist rally of libertines, I wanted to draw attention to the complete and willing abrogation of individuality of the thousands of young people at it who did, actually, raise their right arms in as perfect a unison as any seen at a Nuremberg rally. It was as if they had tired of being individuals, with the terrible burden of responsibility that individuality brings, and immersed themselves in a crowd as comforting as a mother’s womb.

But of course they could not admit that freedom was for them a burden, because we are now enjoined to be always and only ourselves. According to romantic educational theory, every person has something unique and uniquely valuable to contribute, which it should be the purpose of education to find and foster. Of course, this is nonsense; it is true that everyone is unique by virtue of being human, but it does not therefore follow that he or she has something unique to offer, let alone a unique talent.

But the social pressure to find the buried treasure within is great, and great precisely because most people are searching for what is not there. There is no buried treasure within; but as a shortcut to uniqueness, a tattoo—with the theoretical, though not practical, inexhaustibility of design—will do. If no one has a tattoo quite like mine, then I am unique.

You cannot achieve individuality by straining after it. A true eccentric is not the person who does something bizarre in order to be considered different from others, but the person who does something that most people consider odd who thinks that what he is doing is perfectly normal. He is unselfconscious and he is after no particular effect on others. He is not an exhibitionist, but perfectly normal in his own eyes.

What made the Belgian youngsters angry was the implication that they were thirsting for mass conformity, for a kind of dangerous pseudo-communion that made them easily manipulatable (independent of the highly dubious taste of what enthused them). At the same time, their prejudice against conformity as something to be avoided at all cost blinded them to their own decerebrate, and to me depressing, uniformity.

You never hear anyone called conventional except as a criticism, yet convention is inescapable: It is, and must be, nine-tenths of social existence. There is nothing more conventional than trying to escape convention merely because it is convention. To do so is simply to change convention, often for the worse. This is not to say that convention should be blindly followed, either: Doctor Johnson had it exactly right when he said that a person who defied a convention was worse than one who did not, unless he were better. In other words, what counted was not whether or not he defied convention, but whether he was better or worse.

Individuality can no more be aimed at than can happiness. To try to make yourself an individual different from others is to turn yourself into an actor who never leaves the stage.