Is Mitt on a Suicide Mission? 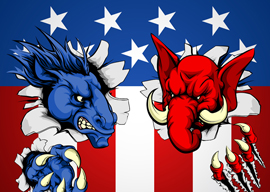 Reince Priebus was commenting on a Washington Post story about Mitt Romney and William Kristol’s plot to recruit a third-party conservative candidate to sink Donald Trump.

Several big-name Republican “consultants” and “strategists” are said to be on board. Understandably so, given the bucks involved.

With the kind of cash that sloshes around in a presidential campaign, there should be no shortage of super PAC parasites at the enlistment office.

Still missing, however, is the kamikaze pilot who gets just enough fuel to make it out to the fleet. Efforts to recruit Sen. Ben Sasse, loudest of the “Never Trump” leaders, appear to have foundered.

Second thoughts set in this weekend when the Nebraska State Republican Convention voted thunderously to chastise Sasse for persisting in his anti-Trump antics, now that the Republican nominee has been decided by the voters.

Among others sounded out for the mission are ex-Sen. Tom Coburn of Oklahoma, retired Marine Corps General James Mattis, former Secretary of State Condoleezza Rice, and Mark Cuban of the Dallas Mavericks. All have begged off.

“Either Trump or Clinton is going to be the next president.”

Apparently, Romney, the Republican Party’s 2012 nominee, personally sounded out both Sasse and Gov. John Kasich, who will be hosting the Cleveland Convention where the coronation of the Donald is to be held.

How Kasich could expect to beat Trump in November, when he lost every state primary to Trump, save his own, is unexplained. And, indeed, Romney’s recruitment of Kasich raises a question.

If Romney believes that Trump is an unacceptable nominee and would be an intolerable president, and that Republicans have a moral obligation to prevent this, why does Romney not man up and take on the assignment himself?

Now, admittedly, Cranbrook in Bloomfield Hills, where Romney attended, does not have a long tradition of producing suicide bombers. Yet, Romney is asking others to undertake a mission that will kill their careers and make them pariahs in their party, but will not do it himself.

His father shared Romney’s mindset: If the voters have made a mistake, you are not obligated to support it. Just days after Sen. Barry Goldwater locked up the Republican nomination in the California primary, Gov. George Romney was at the Cleveland governors conference plotting to stop him.

Richard Nixon arrived to encourage Romney to step out onto the tracks in front of the Goldwater express. Romney thought better of taking Nixon’s counsel. But he did join Gov. Nelson Rockefeller in denouncing his own party for coddling extremists, and refused to endorse Goldwater, as son Mitt is refusing to endorse Trump.

It was after that Cleveland Convention that Nixon ruefully told me, “Buchanan, whenever you hear of a group forming up to stop X, be sure to put your money on X.”

In 1968, George Romney was so far behind Nixon in the early polls he dropped out, two weeks before New Hampshire. Though he quit the race, at the Republican Convention in Miami Beach, he allowed his name to be put in nomination for vice president, to protest Nixon’s selection of Spiro T. Agnew.

Agnew crushed him. But whatever you say about the political savvy of George Romney, he was stubborn as a bull in his convictions, and he had the courage to go down to defeat fighting for them.

Son Mitt, however, is pushing others into doing what he will not do.

Why is Priebus right when he calls the entry of a third-party conservative in the presidential race a “suicide mission”?