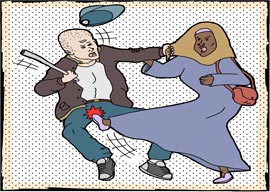 Westerners used to just barge into countries, take them over, and make them better. Before the British invaded, India was just a really hot homeless shelter. The U.K. left in 1947 after trying to sort out India’s Muslim problem and the infrastructure they built immediately began to crumble. The same happened to Haiti after 1804 and Jamaica after 1962. It was obvious the West was the best. Today, however, when foreigners fly planes into our skyscrapers and rape our children, we apologize. What the fuck happened?

I remember on September 12th, 2001, in NYC’s Union Square there were people holding signs that said “Justice Not Revenge.” The first instinct for much of the country seemed to be avoiding Islamophobia. To this day we have a crippling fear of it. Islamophobiaphobia is so severe, any Muslim circus clown can send his kid to school with a fake bomb and instead of charging the father with child endangerment, we invite the boy to the White House. When this first happened, I assumed Obama was duped. Now I”m not so sure. I don”t think he cares if the clock looks like a bomb. He saw #IStandWithAhmed trending and decided he”d like to be part of it. It’s like black people still wearing T-shirts that say “Hands Up Don”t Shoot.” They don”t care about the truth. They just like the story.

“Iran used to have chicks in miniskirts working in science labs. Today these same women are being stoned to death for being raped.”

In case you”re not familiar with the story (it’s already dying on the vine), Mohamed El-Hassan Mohamed is a Muslim prankster and publicity hound who is constantly harping about Islamophobia. His daughter was suspended for making bomb threats at school. His brother started a company last year called Twin Towers Corporation. He has made very public campaigns about running for president of Sudan even though it’s a dictatorship. He drove to Florida after Pastor Terry Jones threatened to burn the Koran and represented the book as its lawyer (he failed”the Koran burned). The guy is a complete idiot who debates like a teenager lying to his dad. A week and a half ago, Mohamed’s son Ahmed brought a clock to school that had been torn out of its case and put in a new case in such a way, it resembled a bomb. The first teacher he showed it to told him to put it away. Then, in English class, he either plugged it in or affixed a battery so the alarm would go off. It did and the teacher did what she was supposed to. When the police arrived, Ahmed was so elusive they were forced to detain him. The crime they were accusing him of was creating a fake bomb to cause a disturbance. This is a misdemeanor, and I haven”t seen any evidence he’s innocent. Despite the case being a no-brainer, the entire country screamed ISLAMOPHOBIA and lay prostrate before the Mohamed family. MIT and Google invited Ahmed for a tour. Mark Zuckerberg offered an internship. Microsoft sent him $10,000 of merch. Hillary Clinton tweeted Ahmed and the president of the fucking United States invited him to bring his “cool clock” to the White House. The boy smiled a big toothy grin and said, “I am pleased that they”re part of the action”the movement.”

I”m not. I think this kid’s father used his own son as a ploy to garner sympathy for Islam. This is an old trick in the Muslim world. They constantly use children as soldiers to detect mines or simply take bullets. They know it kills us to kill kids and they prey on our morality. Ahmed’s school is trying to tell the world that they are innocent, but El-Hassan refuses to release the records. We can”t force him because Ahmed is a minor. These Muslims see our privacy laws as a weakness they can use against us, even if that means endangering their own children. If this were Israel, Ahmed would have a bullet in his head. Cultural terrorists like the Mohameds know we don”t do that so they come here to exploit our system. We see the same behavior when mass shooters choose gun-free zones to carry out their attacks. We”re happy to send home white kids when they wear an American-flag shirt or bite a Pop-Tart in a threatening manner, but when a Muslim kid brings a fake bomb to school, the first reaction is “What can my country do for you?”