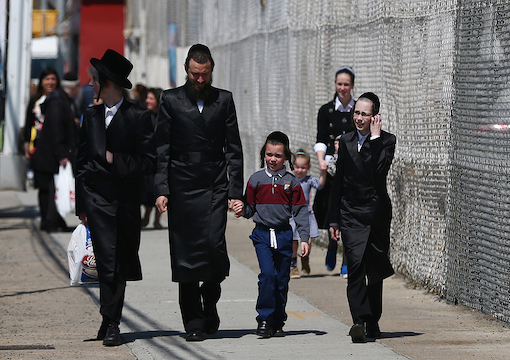 Well, well, well…someone owes Adolf Hitler an apology. On Oct. 9, New York governor Andrew Cuomo declared a “Jewish problem” in his state regarding COVID. The damn Jews are spreading it like plague rats! Mind you, Cuomo wasn’t referring to just any old Jews. Not the right-minded secular progressive Jews of NYC who’ve worked so hard to hand the city over to the muggers, rapists, and murderers. Those Jews can do no wrong.

No, Cuomo was talking about the “ultra-Orthodox.” During his “Jewish problem” press tour, the governor told CNN that the resurgence of COVID cases in Brooklyn is “a predominantly ultra-Orthodox cluster.”

If the Jews are not brought to heel, Cuomo warned, “they will make other people sick.”

Now, I’m not one for Nazi analogies; it’s something you’ll never find me doing except occasionally and sometimes frequently. But I’ll point out that the whole “Jews as spreaders of disease” thing was a common Nazi trope. And in a segment of Cuomo’s CNN interview that has gone criminally unnoticed, Cuomo took the “Jews as disease-bearers” conspiracy theory and gave it a unique 2020 spin by claiming that the Orthodox Jews are spreading COVID because Trump put them up to it!

Look, the president fans division. He does. He always has, started in Charlottesville with KKK there are good people on both sides. No. The KKK is not good. Racism is not good. I see it here in New York with the political interference with this ultra-orthodox community that we have on our clusters. I believe that I have evidence that the Trump campaign is fueling their opposition and their divisiveness. The president has always done this, right? Divide and conquer is his strategy and it’s corrosive, it’s detrimental to everything we’re about, but it’s what he has done from the beginning, so yes, I believe he’s behind it.

That paragraph is a thing of beauty. Beginning with arguably the most dishonest take on Trump’s Charlottesville comments ever uttered (“KKK there are good people on both sides”), coupled with a brave demolition of the straw man (“No. The KKK is not good”), leading into a magnificently lunatic conspiracy theory that Trump is “behind” the Jews’ “opposition and divisiveness,” Cuomo crafts a pretzel of illogic that’s absolutely breathtaking.

In truth, there’s no mystery behind the Jewish “opposition.” There’s no “conspiracy,” no “invisible hand.” The motivation of NYC’s Orthodox Jews is so easy to understand, only a leftist could miss it. The “rebellious” Jews have, like the rest of us, spent most of the year watching Democrat mayors and governors use COVID as an excuse to regulate and prohibit the activities of ordinary, law-abiding citizens while at the same time not only exempting but encouraging the lockdown-breaking activities of BLM and Antifa. New York’s Orthodox Jews, like Christian congregants in other cities and states, have been told they can’t worship, celebrate, or attend funerals, even as BLM—the absolute scum, the ultimate detritus of the nation—is allowed to protest and riot at will.

The double standard’s glaringly obvious, and the Orthodox of Brooklyn have had enough.

More power to ’em. We could learn a thing or two from New York’s Orthodox Jews, and not just about COVID. Frankly, in the months to come, COVID will be the least of our worries. No matter the election results, more civil unrest is in our future. If Trump wins, we’ll likely witness riots on a national scale that’ll rival or surpass what we saw following George Floyd’s death. If Biden wins, we’ll probably get a brief reprieve, as it’s unlikely the Democrats will want their guy sworn in with images of violent unrest playing in the background. The Dems will call off their dogs, but it won’t last. The inevitable first black criminal to be plugged by a white cop during a Biden presidency will trigger the thugs and arsonists, their pot-addled, mildly retarded brains driven to rage by their inability to process “how this could still happen” with Biden/Harris in charge.

One way or another, the riot “successes” of 2020 (in terms of terrorists being allowed to do whatever they want for days on end in major cities as Democrats refuse to condemn them and cops are restrained from using force) guarantee that leftists will employ this tactic again and again. You let a bear rummage through your house once, it’ll come back. And from that point on, it’ll view every house as an open house.

“We could learn a thing or two from New York’s Orthodox Jews, and not just about COVID.”

And when the bears come for your house, you may find yourself woefully unprotected. In August I wrote about the 1989 DeShaney SCOTUS decision, in which a conservative-led majority of justices ruled that Americans have no right to police protection. In essence, our mayors and governors can legally abandon us to the mob. It’s because of DeShaney that Democrats can cede entire cities to thugs and rioters.

After I penned that August piece, a handful of readers messaged me, basically saying, “Well, good, let ’em come. I gots mah guns, and I’ll protect m’damn self.” Putting aside the fact that the same Dem politicians who deliver cities to rioters also arrest and prosecute whites who defend themselves, the “mah guns” argument is the kind of thing that looks good as a Twitter comment but would be quite hellish as a living, breathing reality. If American cities are going to turn into places where white moms and old ladies have to suit up like Rambo just to go to the store for milk, well, that ain’t a livable solution. That’s a defeat, not a victory. At the very least, if Mad Max is to be an option, it has to be the last one, after all others have been exhausted.

And here’s where the Jews come in. No, not those Jews. Not the ones I normally write about—the secular leftist “murder-suicide of the West” ADL Holocaust hucksters and race hoaxers. Not those Jews. I mean the Orthodox, the ones who are willing to physically go into the street to fight Cuomo and de Blasio’s double standards.

We can look to those Jews for an instructive lesson on how to handle unofficially sanctioned riots.

In August 1991, the Hasidic community of Crown Heights in Brooklyn was subjected to days of rioting, looting, stonings, and stabbings by mobs of hate-filled honor students. During the first three days of the violence, the city just sat back and let it happen. On the fourth day, the NYPD was allowed to take aggressive action, and the rioting ended. We’ve seen that same pattern regarding BLM/Antifa; city leaders do nothing as mobs terrorize residents and business owners. And in theory, DeShaney gives local governments the right to do nothing.

But the Crown Heights Jews came this close to possibly killing, or at least severely wounding, DeShaney.

This is where that militant, arrogant Jewish narcissism, that “Oh I know you didn’t just Holocaust me” sense of eternal vendetta against those who do them harm, can come in handy. The Hasidics of Crown Heights and the family of a Jew who was slaughtered by the rioters fought back in a class action suit (Rosenbaum et al.) against the city as a whole and the mayor as an individual.

And they brought in their best legal minds to find a chink in DeShaney’s armor.

Rosenbaum’s legal strategy was centered on the subtle difference between “doing nothing” and “making things worse by doing nothing.” It’s a gray area, but basically, say a gentle giant goes out at night intent on raping a woman. He sees a girl exit a subway station and walk down an alley. He follows her and rapes her. Two NYPD officers and their sergeant are sitting nearby in an unmarked car, watching.

Cop: “Should we intervene?”

That’s the kind of “doing nothing” that’s protected by DeShaney. The cops’ inaction didn’t make the situation worse. Events unfolded as they would’ve had the cops simply not been there.

But the Rosenbaum attorneys claimed that it’s impossible to separate the actions of a violent mob from the actions of local politicians and law enforcement. The mob will grow or shrink, become emboldened or discouraged, based on pushback or lack thereof from those in power. In short, a mob has a symbiotic relationship with the immediate authorities. Official inaction makes the mob’s violence worse. It’s the difference between inaction that allows a bad thing to happen and inaction that increases a bad thing’s severity, what the U.S. District Court for the Eastern District of New York, which had to decide whether the Rosenbaum attorneys had established “a substantive due process basis for relief,” described as “the distinction between affirmatively rendering citizens more vulnerable to harm and simply failing to protect them.” And the court found that in Crown Heights “the inappropriate implementation of a policy of restraint actually exacerbated the danger to the Hasidic community and rendered the community more vulnerable to violence by private actors.”

Rosenbaum was described by one noted legal scholar as having exposed the “cracks in the surface” of DeShaney. The problem is, we’ll never know if the plaintiffs would’ve prevailed at trial, because when Rudy Giuliani replaced “King of Cartoons” David Dinkins as mayor, he settled the case…the right thing to do ethically (and fiscally, as the city risked losing more money from a jury verdict), but it deprived the nation of a potentially precedent-setting resolution.

Whether Trump wins or loses, riots are here to stay as the left’s new favorite way of getting what it wants (Vox quite literally said as much last month). But before rightists decide to go to mattresses, it wouldn’t hurt to consider bringing suits inspired by Rosenbaum. Every action and inaction on the part of Dinkins and the City of New York during Crown Heights—everything that persuaded the court to remove DeShaney “immunity”—has been mirrored to a greater extent by today’s Democrat leaders regarding BLM. Dinkins was accused of only tacitly encouraging the rioters; today’s mayors do so explicitly. The “policy of restraint” regarding police protection cited by the district court has been replaced by a policy of deliberate, calculated withholding of protection. If Dinkins et al. couldn’t hide behind DeShaney, today’s mayors and city councils certainly can’t either.

It should also be noted that none of the SCOTUS justices who decided DeShaney are still on the court, and at least one current member—Kagan—has expressed anti-DeShaney sentiments in the past.

As a secular Jew who as a youth refused to even entertain the notion of a bar mitzvah, I view Orthodox Jews as a totally alien species. But a good idea is a good idea. Battling the likes of Cuomo and de Blasio on COVID lockdowns and BLM double standards is a good idea.

And tearing the heart out of DeShaney was a damn good idea. And an idea that has grown in importance and necessity since 1991 in ways that not even the wisest rebbe could have foreseen.